With the turning of the calendar and the darkest part of the year in retreat we thought it would be a nice time to start sending out some sunshine, or in other words, some Sunfire !

This band released an album called Sunfire in 2017 with 3 bandmembers, Satria , Michel and Berend , and has since then expanded to include Sophie , whom we all know and love from Cesair and Shireen . She provides that extra violin twist, completing their awesome energetic sound and stage presence! For our Monthly Marker we chose one of the sunniest songs on the album, Yoyo, which includes guest appearances by both Daphyd Sens and Rob of ThunderCrow and OMNIA , of course on didgeridoo and percussion, creating a rhythm line that carries the warmth of the song straight into your soul!

And if you enjoy Sunfire…stay tuned! We’ll have some very, very nice news for you soon!!! 😉 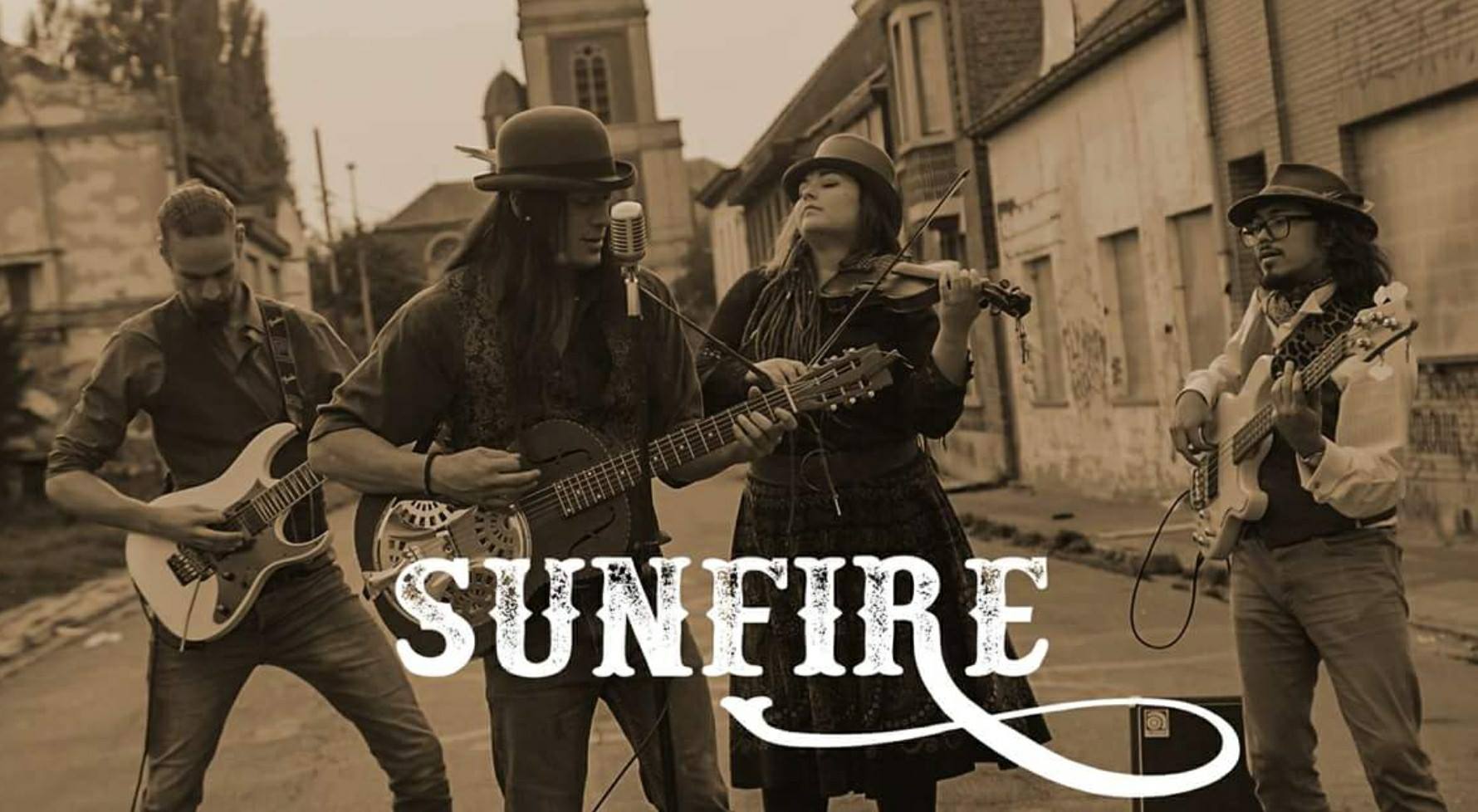 With the new month comes a new Monthly Marker. Having spent November in the “Quiet Land of Erin” with Gwendolyn Snowdon , this time we “Look to the Sea” with Kayleigh of The Dolmen !

Last weekend, at the Castlefest Winter Edition, The Dolmen treated all of us with not one but two amazing performances. One very powerful set following the Yule ritual that was led by Taloch Tony Jameson , and the next day in a more intimate setting an acoustic set that touched the hearts of all present! This inspired us and made the choice for our new focus-track an easy one. Please enjoy Look to the Sea five to six times a day, every day, for the entire festive month!

Yes, it’s the first of the month again, so it is time to wave a heartfelt “see-you-later” to the wonderful “Himmelfot” by Martine Kraft . But equally as important, it’s time to announce our new Monthly Marker! And do we have something special for you this month!

Normally we choose a song that speaks to us from a new or newly aquired album. Sometimes we connect our Monthly Marker to a festival or event that we have planned that month. But sometimes we get surprised by a sneek preview of a new song, not yet released, in our inbox, and this is one of those times!

Amazing singer/songwriter and close friend of the station Gwendolyn Snowdon , whom you may also know as part of Finvarra , is currently working on her solo album, and she sent us a track that we were just blown away by! Immediately after hearing “The Quiet Land of Erin” we decided we wanted to make this our new Monthly Marker, and Gwendolyn kindly agreed to let us present it to you as a scoop! So for the the first time on the radio, playing five to six times a day throughout November, please enjoy the beautiful sounds of this song! We are certain you will feel as enriched as we did when we first heard it! 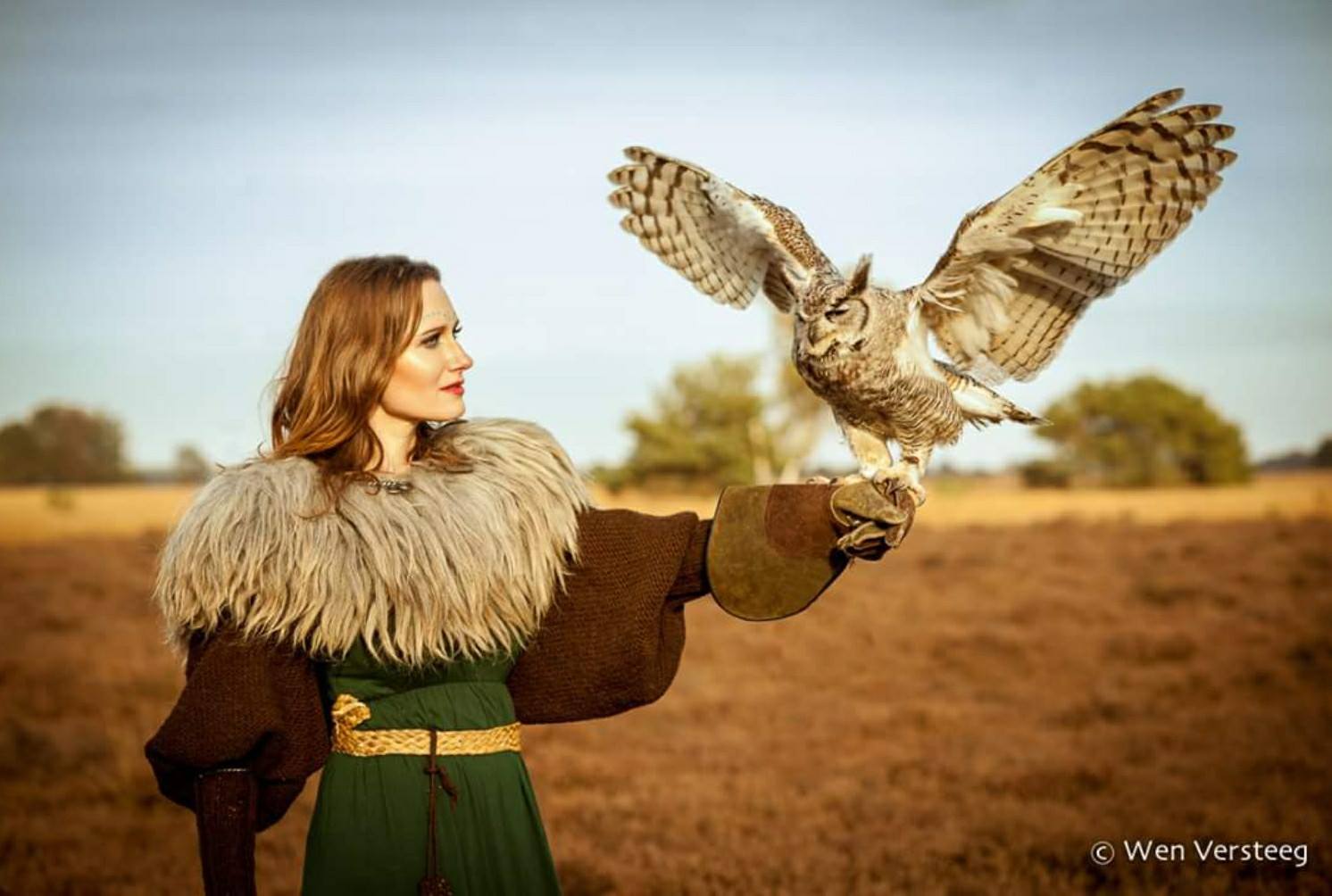 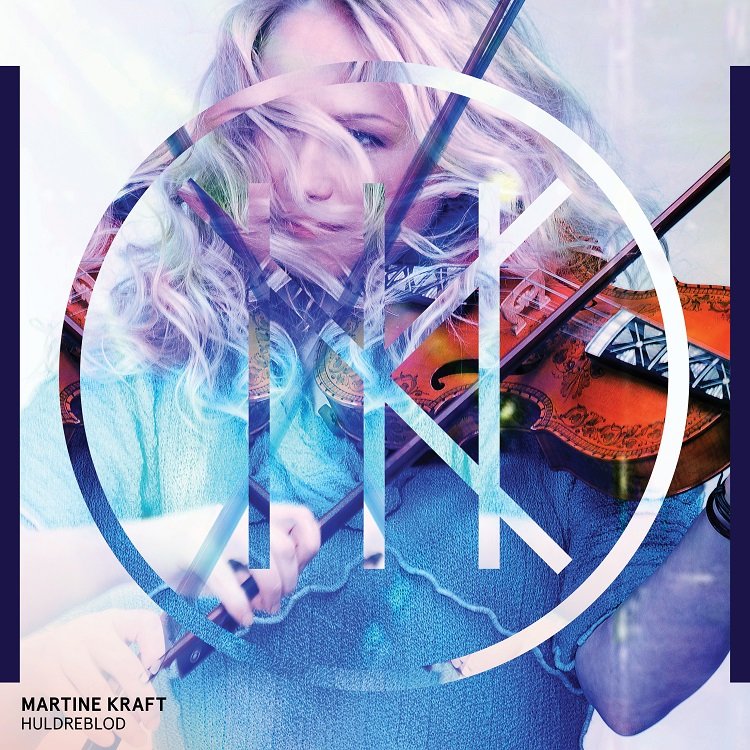 Alex and I both have our guilty pleasures. Bands that don’t fit the CeltCast format, but we like anyway. (I have quite a lot actually, but that’s beside the point.) 😉

One of those guilty pleasures we share together, is Martine Kraft‘s newest album ‘Huldreblod’. It made a big impression on us both. As did her performance at Castlefest, together with Kati Ran. So it’s no surprise one of her songs is the CeltCast Monthly Marker for October. And with that we can also introduce her and her music to the CeltCast community. With pleasure. 🙂

Martine Kraft (34) is a Norwegian musician, singer and composer. Her main instrument is the Hardanger fiddle (in Norse: Hardingfele), which is called the Norwegian national instrument and is named after the area it originates from, Hardanger. The first known one was made in 1615. The Hardanger fiddle is quite similar to a ‘normal’ violin with 4 strings that are played with a bow, but under the 4 strings are another 4 or 6 which are lead through the bridge under the ‘main’ strings and which resonate with the upper strings.

Traditionally the Hardanger fiddle is richly decorated with carvings, Mother of Pearl inlays and black ink decorations called Rosing. Martine’s personal Hardanger fiddle, called ‘Huldrefela’, was given to her by the Norwegian Hardanger fiddle fund, in recognition of her work to make this fiddle more widely known. It’s a 10 string Hardanger fiddle with a special tuning mechanism, making it easier to tune while on the road in challenging climates. It was made by the master violin maker Helge M. Bergnord.

Martine also plays the nyckelharpa (a keyed fiddle and the Swedish national instrument), the ‘ordinary’ violin and the viola (or Bratsj as the Norwegians call it), which is a bigger violin with a deeper sound. Beside the violins she also plays several kinds of flutes. On stage as well as on her album, she is accompanied by her Martine Kraft band consisting of her life partner Nils Jørgen Nygaard Kraft on guitar and keyboards (among other things), Stig Enger on electric guitar, Jon Karlsen on bass and Freddy Wike on drums.

Her fifth album ‘Huldreblod’ was recorded in the Enger studio with Stig. He also co-produced the CD together with Nils Jørgen. Martine wrote all the music for the album and almost all the lyrics. Nils Jørgen wrote them for the tracks ‘Huldreblod’ and ‘Himmelfot’.

On the opening track of the CD, the title track ‘Huldreblod’, Martine showcases that Hardanger fiddle straight away. Huldreblod is a song about the forest nymph ‘Huldra’, a nymph that fell in love with a human. To be able to be with her lover she lost her abilities as a nymph. Every time she was treated wrong, she lost a little bit of her beauty, but her strength and wisdom stayed with her. In a touching and real personal way, Martine dedicates this whole album to Huldra and the strength we all carry inside. We all can have a bit of Huldra running through our veins. The song itself starts with the sound of a Rhombus, (Norse: Brummar) and whispered Norse lyrics, giving us the eerie feel of the dark, misty Norwegian forests where Huldra once lived. The Hardanger fiddle comes in for a fast, ear-catching Prog-rock song. The way the song is built up: the choir, the church organ, the sound of the guitar solo, the break with organ… makes me think of Mike Oldfield’s early work. And I mean that in a real complimentary way. This song grabs you and drags you into the album, leaving you with a ear-worm that will stick with you for days. 🙂

The second song, ‘Sølje’, is a ballad. A Sølje is a piece of Nordic jewellery, in this case left by Huldra on a path for a young man to be found. Here we hear Martine’s voice for the first time and it is a unique one. High, a wee wee bit hoarse and very young in tone, delicate and fragile, which fits the music really well. Martine uses her voice in the same way as Ágnes Tóth (The Moon and the Night Spirit), to enhance the feel of the music she makes. It starts out really gently with only piano, showing her music is about the songs. Not a violin extravaganza. The violin only comes in on the second part of the song with a powerful musical break, kicking this into a pure power-ballad. 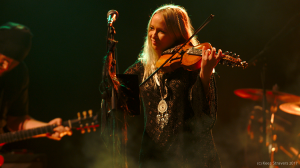 ‘Frikar’ starts out with a keyboard intro that, very shortly, reminds me a bit of Euzen. It’s a pure Prog-rock intro actually, but then the violin steps in and the music takes a 180° turn into a pure up-tempo Folk song. A tribute to the toughest Norwegian traditional dancers, the Frikar.

Next ‘Villvind’ starts with a jazzy, jumpy piano intro?! By now it’s getting clear that Martine’s music isn’t straight forward. She likes to tease us listeners, keep us surprised, putting us on the wrong foot, while the music stays catchy and fun at the same time. Impressive. The song goes on as an instrumental, bit jazzy violin improvisation (or at least it feels like that) again within that Prog-rock style. Especially when the music builds up beautifully from a real gentle, fragile violin improvisation into a climax, lead by Stig Enger’s electric guitar. Short, but oh so powerful (and my head suddenly goes ‘Hello, Dream Theater‘). At this point it’s also clear that the whole band excels on this album. Just listen to Jon Karlsen’s bass-line on ‘Villvind’. 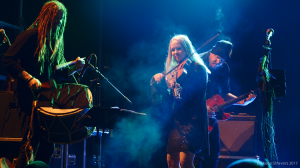 ‘Nar dagen hviler’ is a second ballad. Starting with a moving, Gypsy like violin solo and Martine’s special fragile voice we are drifting away in moon filled dreams. An ambient, dream-scape kinda song.

Which brings us to our Monthly Marker, ‘Himmelfot’. Here I quote Martine from the introduction she wrote in the booklet: ”My child was born with a birthmark shaped like a cloud on his foot. This song ‘Himmelfot’ means ‘sky foot’ “. The song starts with the sound of child’s play, and a balladesque intro… but then jumps into a cool cheerful ‘Norwegian’ jig. Bring out the Balfolk dancers!

‘Solefall’ is a nice mid-tempo Prog-rock song featuring the violin again. With a nice vocal display from Martine to top it off.

‘Mørketid’ is a beautiful ballad. It is one of the more personal songs on ‘Huldreblod’ for Martine, judging by her intro in the booklet. And you can hear it. Just read her intro in the booklet and flow with the music. A special mention to the male ‘Joik’ * on this track. Just another part of the musical diversity of this band proving how they are able to blend Norse (Nordic) traditions into modern songs.

‘Djeveldans’ and ‘Nidhogg’ are up-tempo instrumental Prog-rock songs again. Beautiful, with the violin taking over the role of the electric guitar solo’s. Keeping the sound really clean yet powerful. All kind of musical twists are in there again, as it should be in progressive music. Piano, choirs, breaks… it is all there. Special mention in this case to drummer Freddy Wike in ‘Nidhogg’. He gets his chance to shine with some impressive double bass drumming. Oh and did I mention the trombone in this song already?!?

After all this pure energy, the album ends with the ambient ballad ‘Ravn’. Again, in the booklet, Martine gets real personal in her message to us, the listener. Sharing with us her wishes for future times. Again you can hear it in the music. ‘Ravn’ becomes a beautiful ending to ‘Huldreblod’. An album I really fell in love with during the listening-sessions for this introduction.


If the idea of a unique mix of progressive Pop/Rock music, with a Hardanger fiddle as lead solo instrument (in stead of screamin’ guitars or keyboards), dipped way deep in Norwegian traditions and folklore appeals to you, then this is your CD. If in doubt, just check out our Monthly Marker ‘Himmelfot’ and be convinced. In the meantime I’m gonna go after the other four Martine Kraft albums. This one made me hungry for more! 🙂 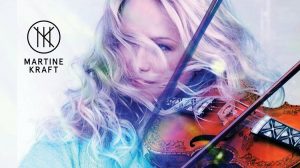 With the end of September behind us, we say goodbye to our Monthly Marker Mix, and with it to Celtic Night Geluwe . Thank you Ann, Marc, Lies, Fré, and everyone who made this wonderful festival possible. We will forever carry you in our hearts! But of course this post isn’t only about looking back, there’s a whole new month ahead!

All through October we will play the lovely Martine Kraft ‘s Himmelfot, from her new album Huldreblot, five to six times a day, every day! Though Martine’s Scandinavian background is quite clear, we are fairly certain that all lovers of Irish and Scottish jigs will love this song just as much as we do! Come join us, as we dance away October! 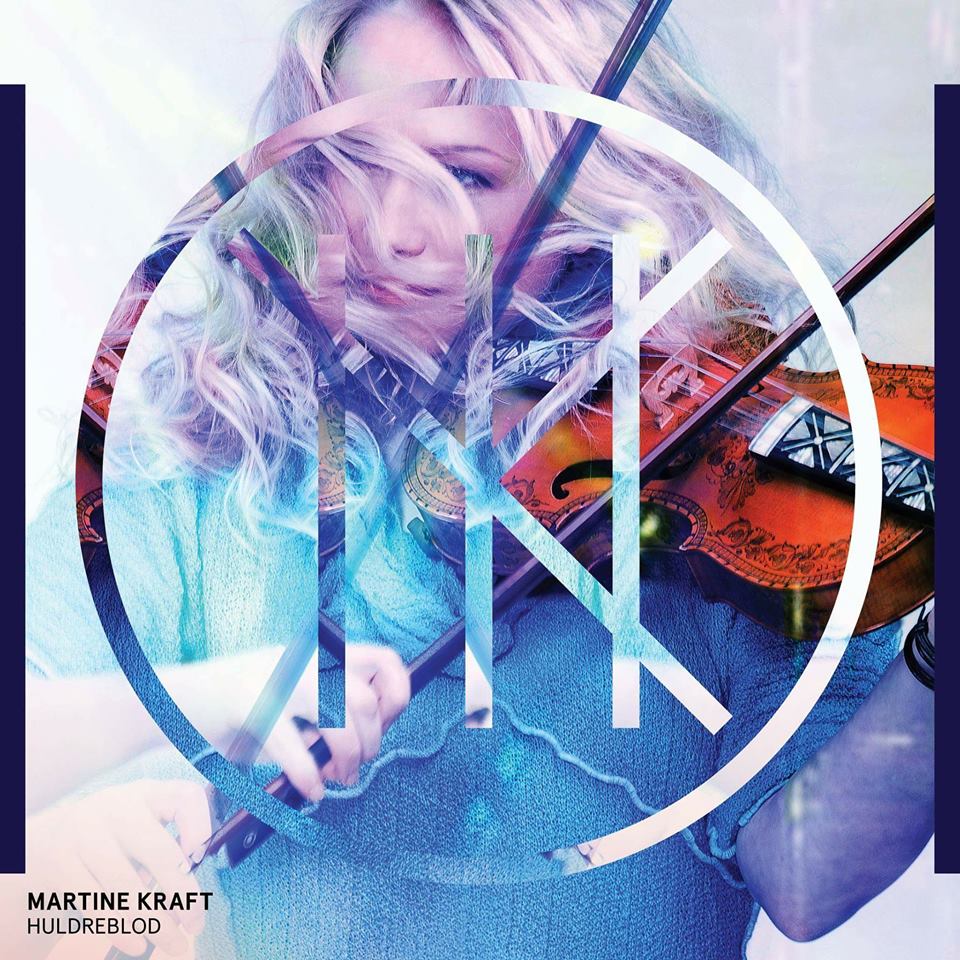