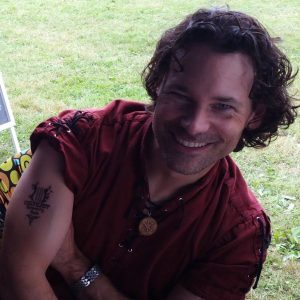 Hi! My name is Alex.


I am delighted to say that I’m one of the founders of CeltCast, because that means the time has arrived that a dream of once again giving back to that wonderful world of traditional music, has become reality. 🙂

Way back, still living with my parents, I could spend whole days just playing records and enjoying a peek into the world of thoughts and ideas of the musicians. There was something magical in the way mere vibrations of air could excite me, move me and sometimes even make me shed a tear or two.

In a world without PC’s and thus the internet, my sources where limited to radio and the music stores within the reach of my bicycle. Mainstream music offered a variety of sounds I liked to listen to and, when walking my paper rounds, much to the annoyance of the locals, I used to sing along with -at the top of my voice. 🙂 . But there were some songs that stood out. Songs of a certain purity, songs that had a way of feeling more like… like ‘home’.

Mid 90’s I started working, travelling all across the tiny world known as The Netherlands. One fortunate evening I happened to end up in a steakhouse in the province of Drenthe, called ‘Robin Hood’, where much to my delight, I got to enjoy the brilliant music of band that was completely unknown to me, as to the rest of the world. Rapalje! made me return there every time it could possibly be done, no matter the distance.

But as jobs end, so did my visits to the North. It was only up until 2004, when enjoying a walk in the Open Air museum in Eindhoven, that I found my bearing again. In front of an ancient farm house were three people, with little means, putting up a show like I had never seen before. We complied with the directive of the Gods, as was revealed to the audience by their lead singer, to “buy their CD” and that summer ‘Crone of War’ by Omnia never left our CD player again.

When in 2005 we went to see them play close to home, to my surprise they were followed by Rapalje on stage!
That first Castlefest ever was my homecoming to a place I never knew existed. A world with so many good friends to meet and so many things to experience. Now ten years in, I have been a volunteer, a fire-breather, a model and a scout, my kids are playing instruments of their own and we choose our holiday destinations to explore more of the ancient worlds.

But most of all, it has opened up the door to so much music! Songs to that show us the beauty of nature, that take us back through time or through rough times in the present. Songs that remind us of the blessing of having good friends around and songs to simply add a little spice. Each and every one, songs that deserve to be heard by artists and bands who deserve to be discovered. Songs we will be proud to play for you on CeltCast.

I hope you’ll enjoy our station and will join us in making the scene grow!