A new album and playing at Fantasy Forest!

Sweet, upbeat, happy, and fun are just a few words to describe the speed folk music made by PerKelt .

And it is not only the music that fits this description. Many of you will have seen them on stages all over England, at Castlefest or on stages all over Europe and know that these four musicians are fun, happy and passionate. Just look at the constant smile David has during every show and you’ll know what we talk about.

Over the last few years Paya , Štěpán , David and recently Duncan have become dear friends to the CeltCast team and we share many happy hugs and memories.This is why we are looking forward to be meeting up with them at Fantasy Forest in less then two weeks time!

Another reason we are looking forward to seeing these cool people is because they just release a new album ‘Air & Fire’, and we wants it!! we needs it!!! We want to get our hands on a copy of that album and listen to the new songs. As a Team we are very curious to hear this new work and see how the familiar sound of Perkelt has evolved. Especially as our Cliff, who has already heard it, can’t stop talking how surprised he is. And how cool the changes are!!! Just as curious?? 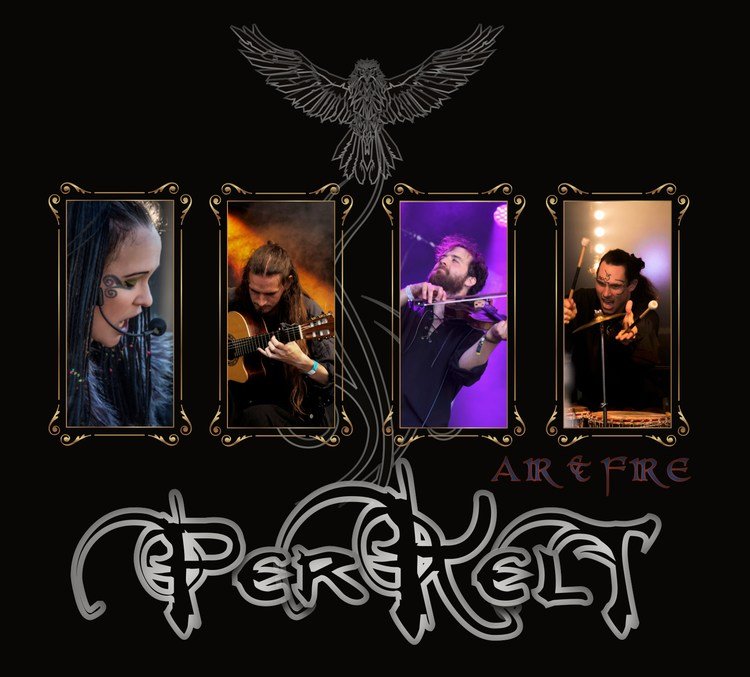 -‘OK, I didn’t see that one coming.’These words were the first I wrote down while listening to Paya Lehane ‘s first solo album. And I really didn’t. I did expect the CD to be different from the music Paya makes with Perkelt. What sense would there be in doing a solo album if you are gonna play exactly the same music again. I imagined it to be a lot slower, but still pagan folk, still with the flute as a main instrument. How wrong I was. The first notes of Bohemia reveal a synthesiser combined with harp and Paya’s voice doubled into a choir. The music is calm, soothing, a real mix between Celtic pop and pagan folk. Then we hear real percussion mixed with programmed drums. As the song continues the sound becomes more and more complex, carefully build layer upon layer, a sound we know so well from Enya ‘s music. It’s grand, orchestral yet soothing. Wonderful music, and not a recorder or flute in sight! As I said, I did not expect that! But what a pleasant surprise.

In the second song, Oppidamus, Paya’s trademark instrument, the recorder, makes its entrance, but again the electronic synth sound comes to the foreground. The flute is recorded clean though and sounds Native American, electronic drums give a nice dance feel to the song and the doubled vocals glide through it all on a blanket of sythesiser. Overall Oppidamus sounds like the perfect marriage between Enya, Adiemus, acoustic pagan folk and the beats of Deep forest, and I can’t help myself but dance to it.
Another thing that I’m starting to notice is an unknown language. At first I though it to be Czech, (Paya was born in the Czech Republic), but no. It’s a fictional language that she uses in the same way that Adiemus composer Karl Jenkins does, creating a new world. In her own words: ‘You might come across a few songs with a language you are not able to place, that is because it is a unique fictional language created to evoke an ancient world which can be found only in your imagination.’ And it works. The voice becomes an instrument that carries a mood, that carries emotions. And as a listener you flow with it.
Sometimes Paya gives a small clue where to go, as she does with the title of Waiting For Dawn, the third song on the album. The sound of the ocean is the second clue she gives here and this sound pulls you into the music. In your mind you can feel yourself standing on that beach, the waiting, the anticipation, then the warmth reaching your face and your body, the wind stroking your hair. It’s all captured in the music and those enchanting vocals. Betrothal is the first wake-up call on the CD. A strong medieval/Adiemus style choir gets you alert and then the drum and bass (!) rhythms programmed by Paya’s husband Rick Lehane get you dancing for sure. The song itself has a real Moorish/medieval feel to it, it makes me think of Irfan. The way Betrothal is recorded is really clever, the vocals and melody sound old, ancient in a way, a real contrast to the modern dance beats under it, and it works, it just works. I love it.

Memento keeps that Moorish feel going, the song is pure pagan folk, tribal, enchanting and such a contrast to the dancebeats of Betrothal just before it. The beauty of Oppidamus as an album is, that it has this perfect balance between the dreamy soundscapes that are so important for new age music and the pure raw energy of acoustic pagan folk. It can be a flute cutting through a mist of vocals and synthesiser or it can be a whole pagan folk song with a sprinkle of new age, as Memento is, but in both ways it keeps the music fresh and crisp. It makes me feel not only comforted like a new age album should, but also happy to be alive. This is happy music. And as I am writing this alinea the first English spoken song, Winter Nights, weaves its way through my ears, as a warm bath of music. Just to prove my point.

Pan’s Delirium is the next surprise. We have a genuine dance song here. The Sidh meets Robert Miles. Compared to the Sidh, Paya and Rick could even have been a bit braver with the beats maybe, creating even more contrast but hey, I’m dancing, so why am I even nitpicking?

Normally when I prepare for a review I listen to an album many times, trying to reveal all the small surprises hidden within the music to share them with you. This time I won’t. It would just spoil Oppidamus. It would also spoil the whole idea Paya had while writing this beautiful CD. It’s a musical treasure trove of emotions there to be discovered by you, the listener. A whole new world of music to be found. And with the last song, the beautiful ballad Raven’s Tale playing as I write these lines, I am going to stop talking, I will put the CD player on repeat and step into Paya’s world again to explore it even more. Don’t wait to long too get this album and join us. Oppidamus is so worth it.

P.S. Normally I weave the technical info into a review, but in this case the music just would not let me! It felt totally out of place, so here we go. Paya Lehane was born in the Czech Republic and has been playing the recorder from the age of four. She graduated from the academy of music in Brno ánd the Conservatory Pardubice in wind instruments and history of music. She is a founding member and lead composer of the pagan folk band Perkelt, known for her fast yet enchanting flute solos. On Oppidamus she not only played her trusty recorder and whistle, but also harp, synth and several percussion instruments. Besides her musical career she is also a gifted Modern artist
Her husband Rick also had a big part in the realisation of Oppidamus. Not only did he play bass, mandoline, synth and percussion, he also did all the drum programming and mixed the album. The production of Oppidamus was shared between Paya and Rick. As on any solo Cd there are musical friends that are quiet willing to help out. In this case we can hear Gwendolyn Snowdon on Bouzouki in the song Bohemia.
Sophia Kinston from the Australian electro/neo folk band Tailor Birds on electric violin and Perkelt friend David Maurette on drums, both in the song Waiting For Dawn.
Last is London composer and cellist Matt Constantine who can be heard on Winter Nights.

We are taking a step back to the year 2016, Perkelt at Castlefest

This throwback Thursday we are taking a step back to the year 2016 when PerKelt played at Castlefest for the first time. Perkelt plays Celtic Medieval Speed Folk. And when they say “Speed” they mean fast, really fast!!! It is impressive. The energy this band shows is almost unrivalled.

Besides being awesome musicians they are also very sweet and so kind! From the big smiling David , the humbly laughing Štěpán to the ever lovely Paya , it is clear that they really enjoy being on stage and at festivals.

It is really awesome to see them back again this year at Castlefest. Come dance with us to their tunes on Thursday, Saturday and Sunday