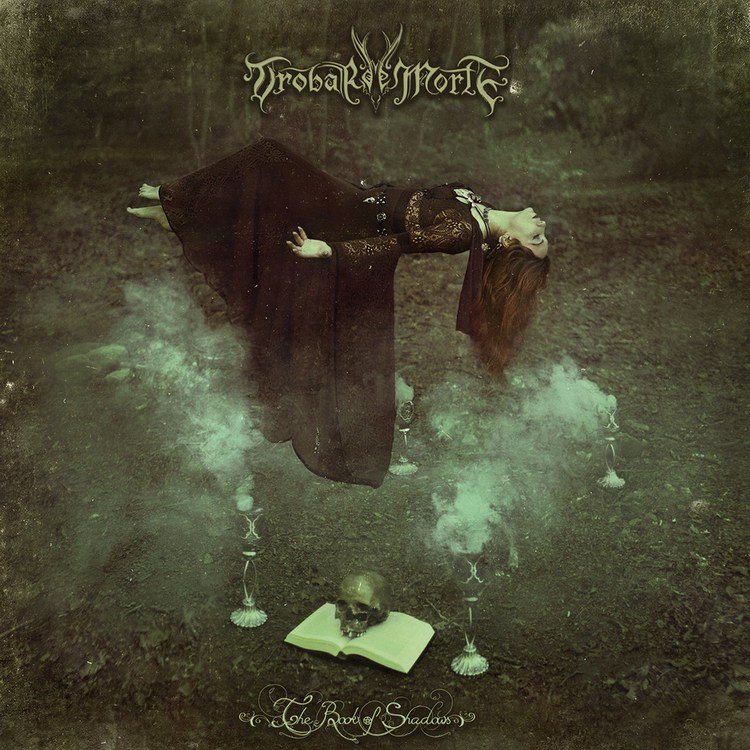 In these odd times we are living in, it is good to know that some things just don’t change. The first spring sun still heralds the start of the year, the morning chorus of birds still greets us when we wake up, the evening fire still warms our bones and the sound of Trobar de Morte still soothes our souls, no matter if you put on their first record Nocturnal Dance Of The Dragonfly or their latest one called The Book Of Shadows. It feels really reassuring to hear that typical Trobar de Morte sound ringing in my headphones. Those layered, slightly melancholic vocals of lady Morte, those calming, wall-to-wall ambient pagan folk melodies, those mythical lyrics filling the room with a peaceful ease that only this Spanish band has mastered. Once inspired by Dead Can Dance, Trobar de Morte are now a pagan folk phenomenon in their own right, with their very own unique sound and I love them for that. The intro Introilus Libris Tenebris, and songs like Mandragora Autumnalis, Melusine Cantus or Plenilunio are all a joy of recognition. Trobar de Morte have a new album out and after just a few notes I feel right at home. It seems nothing has changed at all, with an emphasis on seems! But, as always, I’m getting way ahead of myself now. So let’s ‘open’ The Book of Shadows and dive into the unique world of Trobar de Morte once more. 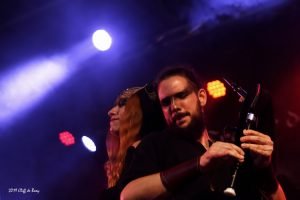 the Intro, Introitus Libris Tenebris, is all you’ve come to expect from Trobar de Morte. Impressive ambient pagan folk soundscapes that could well work as a film score for any self-respecting epic fantasy movie. Be it Lord of the Rings, Elfquest, Journey to the Center of the Earth, or the Dark Crystal, they could all do with a touch of Trobar de Morte magic. Come to think of it, this intro indeed feels like you are gliding into something deep and mysterious. Into a portal deep down into the center of the earth. As if you walk down into a dark cave, torches casting long shadows over the crystal walls, the echoes of your footsteps ringing loudly through your ears, betraying every gentle step you take. The silence loud and eerie, the atmosphere tense as if you could cut it with a knife. At the end of it, a cave, beautiful, grand, torch-lit, with stalactites in all shapes and colours. The whole sight of it is breathtaking. Unearthly. Elflike. And in the middle of it, floating above an enchanted lake – its water reflecting the orange colour of the torches burning in all corners of this fast cavern- you’ll find the Book of Shadows hidden deep inside this secret entrance to Middle Earth. (This is what happens when your imagination meets Trobar’s music, it will drift off to wherever it wants to lead you and I happily will let it.) The second song, Sacrifice, continues with this same enchanting feel. At the start of the song, the sound of water droplets seems to follow you closely as whispered voices lure you deeper into this mysterious world. The song itself seems to be Middle Eastern (Persian perhaps), and has a warm feel to it. The layered vocals, as always, are impressive. The music, as always, feels like a soothing blanket that you instantly want to snuggle in. The dramatic arrangements of the music, as always, seem to lure you away into those dark shadows of comfort only Lady Morte can provide. Yes, this is Trobar at is very, very best. A solid musical mix of Cesair and Dead Can Dance, and I am preparing myself for a lovely journey into familiar musical grounds. Well, the musical journey is indeed lovely, but not into those familiar grounds I was expecting. On the contrary! The next song, The Unquiet Grave sounds way more open, much more Celtic than I am used from Trobar de Morte. It is far more towards Cesair’s epic folk sound than the usual carpet-like Dead Can Dance style I am used to hearing from Lady Morte. Looking at the booklet, The Unquiet Grave is credited as a traditional English folk song and indeed it shares its DNA with another English classic: Over The Hills And Far Away. So definitely NOT what I was expecting! When Uri Bokskog throws in a lovely Celtic tin whistle solo, the sound seemingly flowing in from the distant fields of Ireland, my surprise is complete. Anxiously I await the start of Mandragora Autumnalis: will it be a continuation of this ‘new’ Celtic sound? Yes, it is! A single harp melody follows you as you walk through a thick and ancient forest. There is the sound of birds, both ancient and exotic, eerie and muffled, dampened by the mist of the forest. It sets the mood perfectly for what is to come. As always Oscar David (Axstudio, responsible for the mix and mastering) and Lady Morte (co-producer) managed to put down an awesome, unique sound. The drums are dark and spiritual, drawing you deep into ancient woods. Woods that are created in your imagination, born out of the tantalizing music of Trobar de Morte It’s the green forests hidden deep within the pages of The Book of Shadows. Right there, between the dark shadows of the immaculate handwriting that covers the pages of this ancient book of wisdom. It is filled with the power of long-forgotten druids, their spells luring you in. This, dear friends, is powerful magic. The Mandragora is calling you in, deeper and deeper, do you dare and follow its call? Going into the fifth song, Fuga Maleficis, I’m starting to understand what is so different about Trobar’s sound on this album. The music is still layered, it is still created by stacking melody upon melody, but where on previous albums the layers were mostly glued together with keyboard carpets and voice effects, in this case, the layers are filled in with the instruments themselves, which gives the overall sound more space to breathe. It gives the individual instruments more 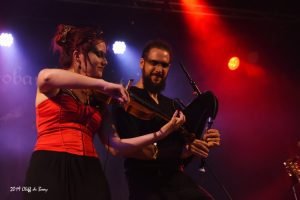 room to fill, making you hear much more of the nuances played by the musicians than you normally would. Even on Fuga Maleficis, – which is a typical grand Trobar de Morte song with all those multi-layered choir vocals and magnificent orchestral arrangements of strings, percussion, and folk instruments- you can hear ALL the subtle details as well. You can easily hear the cheerful tin whistle solo playing around the Celtic choir for instance. Or the viola sound quickly ‘rushing’ away into the shadow of the woods, as it finds itself captured in a musical break, just seconds before the enchanting power of lady Morte’s vocals is unleashed again. It are two small details hidden within an impressive orchestra of sound, but it are those details take make this CD extra special. The same goes for the vocals. On this album Oscar and Lady Morte managed to make it sound like a true, full-on, mighty impressive choir. What a sound. What a stunning song this is. Possibly my favourite one on this album. This more open natural sound also makes The Book of Shadows sound rather cheerful and positive despite its dark title. It is almost in contrast with its title actually. Melusine Cantus is another good example of this. Yes, it is solemn in style, the Latin texts even enhance the spiritual feel of the song, but the open, ‘natural’ sound of the song gives it a pleasant feel. We celebrate the power of the Book of Shadows on this album, we do not fear it. We hear the music through the ears of the Druids and Wiccans of this world, past and present. Those who are one with nature, not in fear of them as some people would be. Pleninulio sounds like a reprise of Sister Of The Night (found on the 2018 album Witchcraft) and is another one of my highlights on this great album. I loved the song in its original form, dark and daunting. I also love it in this more open, instrumental, Persian reprise. Hearing all those details in the music is a treat. The percussion (well done throughout the whole CD); the grand string arrangements; the subtle organ-like keyboard support; the beautiful cello/ viola solo starting around 50 seconds, answered by the whole string section; the enchanting vocal solo of lady Morte; the hurdy-gurdy seemingly calling from the edge of the woods; and the Spanish sounding guitar solo taking you to a musical version of Alhambra, holding its own against a virtual castle wall of orchestral sound. This is one of the best songs Trobar de Morte ever recorded. But not the only wonderful song on The Book of Shadows. Just listen to Land of Sorcery, how positive that feels, what an enchanting mix between Celtic folk and spiritual pagan folk it is. Listen to Luna Cornula and the dark male vocals of Uri catching me off guard yet again. Darn, this is all SOOO good!!! My conclusion can be short and sweet. I love the pagan folk/Dead Can Dance sound Trobar de Morte have created over the years. I would not have minded another album in that style, not at all. But I ADORE this version of their music, this open orchestral version of lady Morte’s unique style. Trobar de Morte have recorded another musical masterpiece. One that will spread joy and positivity as much as it will spread awe amongst their fans, including myself. A positivity that is much needed in these odd times, and I thank Trobar de Morte for that, with all my heart! – Cliff editor: Sara cover art: artdrómeda photography Pictures: Cliff de Booy 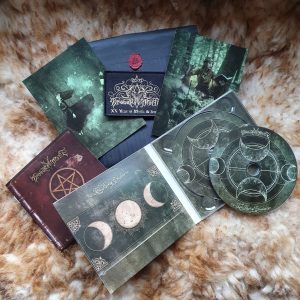 Recently, we received the new album of Trobar de Morte, the Medieval, Folk and Fantasy band from Barcelona, Spain. The Book Of Shadows came in a beautiful package, a real present! The artwork of the album is as always stunning! It contains a booklet with 10 pages full of photos, drawings, and lyrics. Most of the songs are composed by Lady Morte herself. A couple of songs are by Daimoniel B. Eldar. The song Helvegen is a cover of the original song by Einar Selvik (Wardruna). The artwork is made by ArtDrómeda Photography and Duncan Triskel. Last Sunday, you might have heard the first song of this album play on our radio stream. You can find the whole album already on our Spotify CeltCast Radio – Official list. My favourite song of this album is Witches! I love the diversity of sounds in that tune! It makes me think of the songs of EMIAN. So enjoy this new Trobar de Morte album as we do!