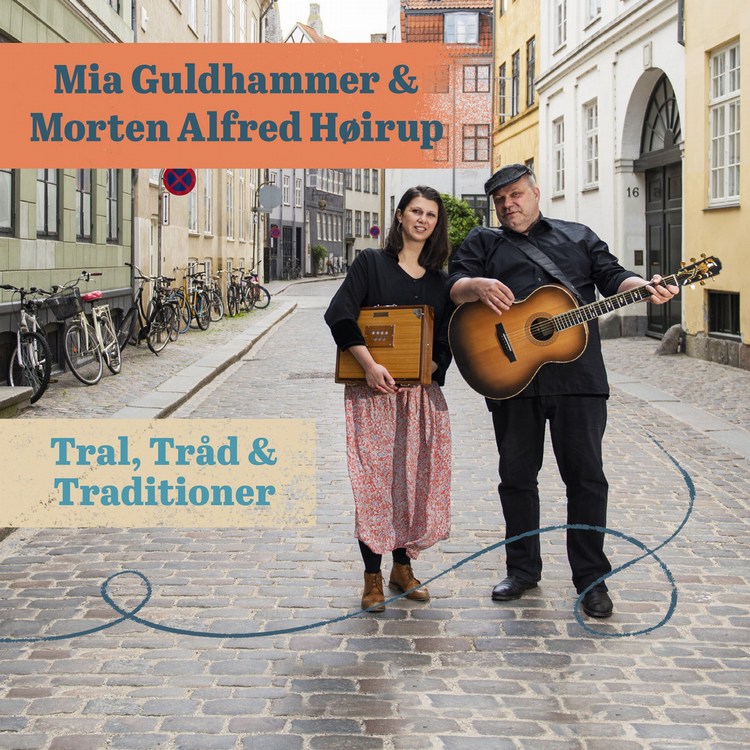 In every scene you have certain people who seem to part of every band you know. In Holland the names Lies Sommer and Sophie Zaaijer come to mind. In Germany it’s Patty Gurdy and Brisinga‘s Fabi, and in Denmark, obviously, one of them is Mia Guldhammer. At CeltCast, Mia is mostly known as the leading lady of the medieval folk band Virelai, but she also is the lead singer of the ‘electrophonic folk orchestra‘ Mallebrok, and she teamed up with the French folk band Dour/Le Pottier Quartet and vocalist Sofia Sandén to form Nøkken (Not to be confused by the Norse jazz-pop band with the same name) a group that mixes Scandinavian folk vocals with a classical chamber music feel and a lovely Eastern European improvisation style. (find a link to a concert of them here) Mia’s latest collaboration is with Danish folk guitarist and singer Morten Alfred Høirup and as always, the result is something special. 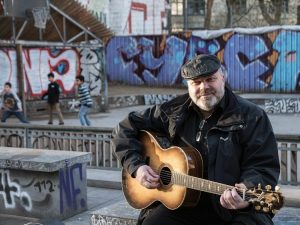 Before we dive into Tral, Tråd & Traditioner let’s further introduce Morten Alfred Høirup. Just like Mia, this composer, guitar player, singer, and folk radio DJ is a well-known face in the Danish folk scene, but has also built up a following in the American roots music scene. He is, or has been, a member of several folk groups, some more traditional Danish, some more adventures, mixing 50’s style swing with folk, explaining Morten Alfred’s popularity in the American roots scene. I’ll start with the more traditional groups first. Both are trios that play melodic accordion-oriented Danish balfolk. We have the Gangspil trio (2012 – 2017) and trio Jensen, Bugge & Høirup (still active). The Jensen, Brugge & Høirup trio feels the most traditional of the two I listened to. The Gangspil trio sounds a bit lighter, leaning slightly less on the distinctive sound of the accordion, but both are nice balfolk albums. Two sides Morten Alfred’s music Then there is Morten Alfred’s swing-jazz/ Scandinavian folk side. Again I found two bands on Spotify: Himmerland is the more laid-back, easy listening of the two. The other, the American Café Orchestra, will challenge the listener a lot more. The basis is also laid-back swing folk, but quite often it has a hidden sting: an experimental approach that will challenge the listener. Songs like Rain, Egyptian Domino Dance, or Grey Brothers’ Holiday are well worth checking out for the more adventurous folk fan. Morten Alfred has also been involved in bands I didn’t find on Spotify, such as the duo Fin Alfred & Morten Alfred with his father. Furthermore, he forms a duo with American Café Orchestra fiddler Ruthie Dornfeld, and he has been playing in the Danish fiddle and guitar duo, Haugaard & Høirup from 1998 till 2008. The album So after this impressive introduction, the big question is: what will the partnership with Mia Guldhammer bring? A traditional Danish accordion sound or something more in the direction of the intriguing folk jazz bands Morten Alfred is part of? The first notes of Brudegaverne/Lybekkeren/Altergang make me say traditional, but without the accordion. The song is upbeat, and strong in its simplicity. A voice and a guitar, that is ALL you get here -OK, and a choir joining in at the chorus but that’s just a ‘minor’detail-. You don’t need much more anyway. Mia and Morten fill up the whole room perfectly, their voices are a match made in heaven, the rhythm guitar is exquisite, and that choir is pure genius. The quality of Mia’s voice is well known, but Morten Alfred has a voice that easily equals hers. He proves so on Sorgen/Håbets Dans. Strangely enough, he rarely sings in any of the bands I listened to while doing my research, so some may be surprised to hear the quality of his voice. Just like Mia, Morten Alfred has an accomplished, warm, and soothing voice. A pleasure to listen to. The harmonies he and Mia sing together on Sorgen/Håbets Dans are like a warm blanket. Pure bliss. And the lilting at the end of the song feels like vanilla ice on a hot chocolate cake. So smooth. I’m also glad that Morten Alfred’s rhythm guitar playing is one of the features of this album. The part of the rhythm guitar is quite often overlooked, overshadowed by the soloists, but it is such an important part of a band. Highlighted as it is on this album you can hear how Morten Alfred’s playing fills up the room, how his rhythm has groove, how it drives the music, and how he effortlessly creates a smooth musical blanket on which the voices and soloists can shine. That’s the magic of a good rhythm guitar player. Lilting Hold on, did you say ‘lilting end’ a few lines ago? Yes, I did. But I’ll let Morten Alfred and Mia explain that themselves: -‘ When we first met in Copenhagen in 2018 and started making music together, it seemed like we were missing an instrument to take the melody now and then. But as soon as we had that thought, we realized that we could just 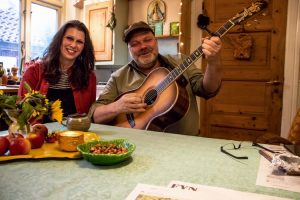 ‘lilt’ the melody, just as we’d each been doing so often when singing alone at home. We quickly learned that we didn’t need more than our voices, a guitar, and some catchy material to work with.’ And boy does it work! We have Polka Umulius to prove it! This, the third song on Tral, Tråd & Traditioner, has to be my favorite song of the album, maybe my favorite song of the last few months! I have had this as an earworm ever since I first listened to it two weeks ago. The song also answers whether Morten Alfred and Mia would go traditional or folk-jazz on this album. Both, actually! Polka Umulius is a traditional polka, but it is also jazzy, upbeat, cheeky…actually the most fun you can legally have on a dance floor. Ánd it is a lilt from start to finish. I love this. I truly love this! Put this song on and you instantly have the summer sweeping through your living room. A song like this should not be allowed without a “will cause addiction” warning on the package. That’s all I need to say about it! But we have to carry on, there are more treasures to be found on Tral, Tråd & Traditioner. The following song: Hvordan Vil Du Forsørge Jer greats us with a cool jew harp /guitar intro. Although Mia and Morten Alfred said they only needed good songs, a guitar, and their own voices to fill up the CD, they díd invite their friends over for some additional musical coloration. The mouth harp solo in this song for instance is really cool, and there are more moments like that on the album. There is the violin following Mia’s lead vocals in Polka Umulius. There is the mouth harp solo on Hare Løb, with a vocoder no less. As if Peter Frampton temporarily stepped into the folk scene. In Åh Min Nikolaj/Russeren/Den 2. Russer you’ll hear an overtone flute flutter through the music, giving the song a cool pagan folk feel, not to mention the smoking violin solo in the second part of that song. But it is all tastefully mixed in the music. The overall feel of the CD stays that of two folk balladeers performing right there in your living room. And it is THAT sound that makes this album so special. That magical harmony between the voices and the guitar. Co-producer and studio technician Louise Nipper managed to record that magic perfectly, so huge kudos to her. Morten, Mia and Tapani Varis performing Varis Hare Løb Well, I think that sums up Tral, Tråd & Traditioner quite nicely. Mia and Morten Alfred have created a warm traditional singer-songwriter folk album with a lovely cheeky swing jazz touch to it. Really original in its approach and really laid-back at the same time. One of my big wishes is to be allowed in a studio or rehearsal room once and witness an album being born. To see the whole process involved, especially the creative part. Well, that wish has come true. Tral, Tråd & Traditioner feels like we have been invited to the studio with Mia and Morten Alfred. You will hear all the fun ideas they had; all those “we can’t do that!” moments, that normally never seem to survive the mixing process, have been kept in. This Making Tral, Tråd & Traditioner a boost of energy, a splash of good cheer, and an awfully entertaining CD. – Cliff Editor:Iris