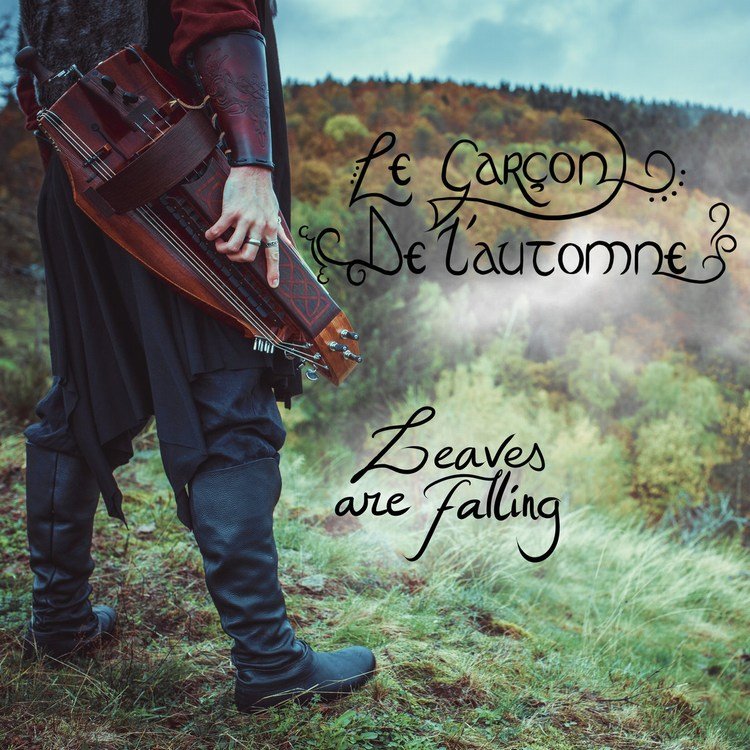 There are five things going through my mind as I listen to Leaves Are Falling, the debut album of Quentin Maltrud, alias Le Garçon de l’Automne. Those thoughts are: – ‘That sounds nice.’ – ‘Oh wow!’ – ‘This has potential.’ – ‘You might want to rethink that part.’ – ‘Yes he has so much potential.’ The first three are the predominant thoughts I have after listening to Leaves Are Falling though. Leaving me with a really positive feeling after listening to Quentin’s music. You could see this debut album as Quentin’s journey through the pagan folk scene. From medieval music up to pirate folk, and from dark Nordic folk to the warm nostalgic Mediterranean sound, he had a taste of all of them on this record. Quentin’s main instrument is the hurdy-gurdy. He started playing around five years ago, inspired by the music of Eluveite. As our young Frenchman discovered more and more folk music he also taught himself how to play the Irish bouzouki, recorder, several flutes, chalumeau, didgeridoo, kalimba, darbuka, hammered dulcimer, percussion,surpeti, jouhikko, and keyboard, among others. (Oh and he also sings the lead vocals on Leaves Are Falling.) Again a clear cross-section through all de different styles of European folk. It proves Quentin to be a curious person, or as he is described by our college of Mythologica in an interview: – ‘A traveler in music.‘ Well then, let’s travel with him. 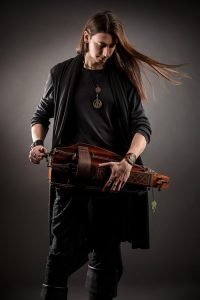 The first track I want to mention is called Alioth. It’s an instrumental piece, starting nice and traditional, but you will quickly hear the potential in Quentin’s arrangements. The intro with the hurdy-gurdy and Medieval percussion is fun, but still predictable; the choir, coming in at 01:48 most definitely is not, nor is the cool keyboard sound just before that. An original mix of 70’s Mike Oldfield keyboards mixed with a healthy splash of organ. It really adds to the song, as does the marimba I hear around 2:30. A really cool touch. I also like the way Alioth is built-up, keeping me interested all the way to the end, even though it’s all based upon one single melody. Well done Quentin, a nice first impression. Quentin tops that straight away with Stars, my first ‘WOW’ moment on Leaves Are Falling. It is a song he wrote together with some members of Scurra, and it is truly impressive at times! The wow-element starts straight away with a lovely music box intro. So nice and delicate! It is followed by a beautiful violin melody, played by Ombeline la Fougueuse (Scurra), that reminds me a lot of Vael. The whole feel of this song reminds me of this Spanish band actually. The choir coming in at 2:40 is really impressive. It is quite bold for a starting musician/music producer to throw something like that into a composition. It is one of the many moments that I can hear the potential in Quentin’s music. He clearly isn’t afraid to try things out. And they quite often surprise me in a pleasant way. I already mentioned the intro, but there is also the music box outro, with a lot of phasing effects on it. I only wish Quentin would have played with some stereo effects here, making the sound wider and even more interesting. That would have been the icing on the cake, but: potential, potential, potential! Tiniri is another song that gives me a lot of positive vibes. It is a medieval song with an exotic touch of Eastern percussion and Middle Eastern backing vocals. I love the marimba/guitar part in the middle, with some cool spoken word bits over it, in Arabic no less. The powerful orchestral follow-up is also pretty darn impressive. You could only wish the instruments were spread out more in the overall sound for an even bigger impact. Now everything is sitting safely in the middle of the stereo image. Placing some instruments left and right in that stereo image, having the percussion or marimba come from both sides, playing a bit more with effects, are neat producer tricks that would make such a difference. But, having said that, Tiniri is a cool track with a lot of potential to become a WOW song. The same goes for A Devil Made Me Do It. A cool song as is, but with so much more potential hidden in it. The evil laughing in this song for instance. As a listener, you want to be engulfed in it. Had it been coming from all sides on my headphones, it would have scared the living daylights out of me, (and would have had just the effect Quentin intended.) Still, a potential WOW song Talking about WOW songs! Saltatio Vita has it all. It’s a beautiful ballad sung by Quentin and I can say he sounds beautiful in his own language. Saltatio Vita is the perfect song for his slightly fragile singer-songwriter voice. A tender melody carried by the guitar, with lovely flute and violin solos added to it. A perfect match. Quentin’s vocals also blend beautifully with those of guest singer Aubelia l’Ecumeuse, and the backing choir formed by Scurra members Aubelia, Ombeline, and Fergus Mac Aron. Easily my favourite song on this CD. This shows ALL the potential Quentin has as an artist, songwriter, and producer. After Saltatio Vita, Quentin gives dark Nordic folk a try and.., well…, it isn’t the best part of the album, to be completely honest. Nordic folk from bands like Garmarna, Hedningarna, (or certain Asynje and Brisinga songs), are known for their dark mythological feel; their deep Viking vocals; epic yet melancholic nyckelharpa chords; and (occasional) almost out-of-key seljeflojt solos, that end up being hauntingly beautiful. I can hear Quentin trying to do the same, but he regularly crosses that thin line between hauntingly beautiful and clearly out of key, especially in Båtens För. Quentin’s voice is too much of a high-pitched, soft singer-songwriter one, to be comfortable in the low, deep chords he is trying to sing. (The same reason why Oliver SaTyr (Faun) would sound totally out of place as the lead singer of Heilung). The seljeflojt- and chalumeau solos do not help the two Nordic folk songs either, especially in Båtens För they are just off the mark. I can hear the potential in these two songs, especially in Nattkulten, but they are saved for prosperity just a touch too soon in my opinion. Luckily Quentin redeems himself quickly as he leads us into the shanty section of Leaves Are Falling. Au Fond Des Brumes is a nice French shanty, with a cool accordion solo by Laurens Krah, ( Imbue/ Pyrolysis), that plays right into Quentin’s strengths. If I’m nitpicking, Quentin’s voice could be a bit stronger at some points, but nothing a bit of vocal coaching can’t solve. That would be my general advice for the next album actually: Get some friendly pairs of ears to help take the music up to the next level. 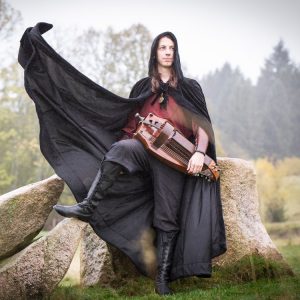 In an interview Quentin did with our colleagues of Mythologica (published below) he told that Le Garçon de l’Automne became a solo project because he couldn’t find like-minded musicians in his neighbourhood. In retrospect he said that he actually liked working alone because it gave him the chance to develop his music alone, not having to compromise as you do in a band situation. I agree with him. Working solo gave Quentin the chance to define his own style of pagan folk. He was able to explore all the different styles of folk that inspired him unhindered, and it helped him learn things he might never have taken on if he’d been in a band situation. Listening to Leaves Are Falling I think Quentin is now ready for the next step, working together with experienced, talented musicians like Laurens Krah, or a talented producer like Štěpán Honc (Perkelt), will make him want to become better, to push his music to the next level. Having talked to Quentin after he read the review I wrote, I could sense his drive to learn. I’m sure more experienced musicians will give Quentin a big push forwards. Not because he has to, no because he wants to! There is so much potential to be found on this record. NVTTO for instance is a beautiful catchy song that only needs one or two recording tweaks to make it a WOW song. That glockenspiel in NVTTO is so cool, it just needs a tweak and it will become ‘wow’. Or the didgeridoo in the same song. I already like it. Make it sound more massive and Quentin is onto a winner. The same goes for the organ/choir start of Lava Veins. Already a cool idea as it is. Go even bolder with it and it will become epic. It’s those post-production tricks that Quentin now has to learn. Listening to the whole album I know the ingredients are there for a smashing second CD. All the potential is there. Some of the songs on Leaves Are falling are really good, there are some truly original ‘flavours’ added to the music, and the contributions of the guest musicians are well-choosen additions. I truly feel working with an experienced musician like Štěpán could be the last piece of the puzzle. I know there is more inside Quentin Maltrud. I can hear it between the notes. I’m going to enjoy watching this young musician grow in the coming years. I’m sure of it. – Cliff Editor: Sara CD Cover: Robin Kley Photographies pictures: – Lollipop Studio (1) – Robin Kley Photographies(2)