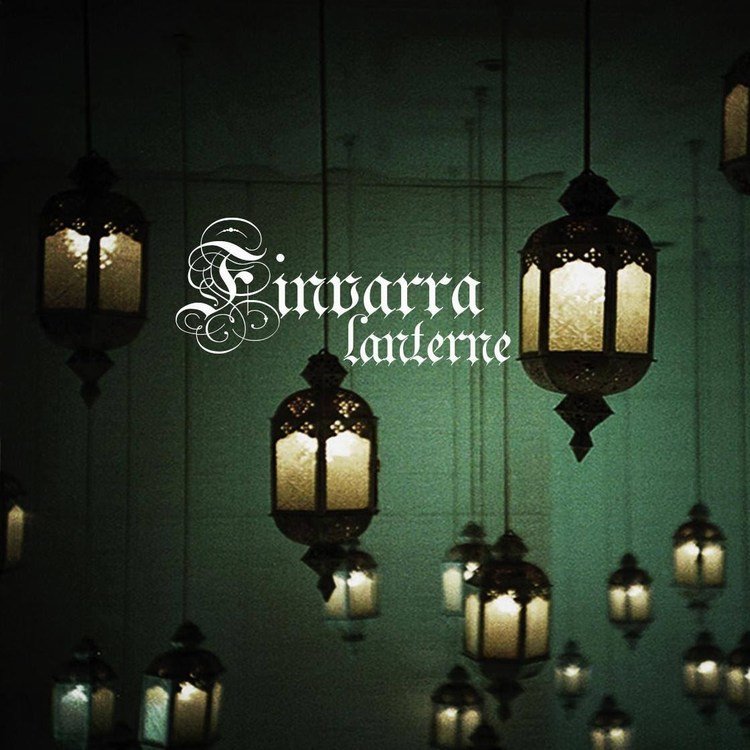 Always quit while you’re ahead! Well, the Dutch folk band Finvarra took this old saying literally, announcing that the band would stop playing together in the very same message in which they talked about the release of their latest mini-CD. That is one way to get my attention. In the words of the band: “- We are and will remain good friends but in the last two years we all went our own (musical) ways and we are happy with that. We had a very nice time with the band and are proud of all we have achieved, the great concerts we gave, all the nice people we’ve met and of the two CD’s we have released. We would like to thank the bookers who put their faith in us and made concerts possible on the most adventurous locations. And of course we thank the photographers who captured these concerts so we could share them with the world. Last but not least, we would very much like to thank YOU, our loyal fans, for your support, love, and for dancing to our off-count songs 😉. Here’s to friendship and music!!”

So Lanterne is not only Finvarra latest CD, no it is also the last album the band will make together. And yes just as you, I secretly – as secret as you can be writing it out right here- hope there will be a reunion somewhere in the future. Listening to the quality of music on the record, I am left craving for more. A lot more! 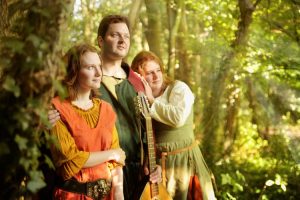 But let me introduce the band first. Finvarra are the Dutch musicians Dieke Elfring (vocals, bodhrán, percussion); Gwendolyn Snowdon (vocals, Indian harmonium, bouzouki); Patrick Broekema (guitar, bouzouki, mandolin, low whistle, backing vocals); Corné van Woerdekom (violin, backing vocals, percussion) and Evert Willemstijn (double bass). Their origins go way back to 2010 when Dieke and Corne, both studying at Leiden University, met Patrick and Gwendolyn at folk sessions held every two weeks in Cafe the Tregter in Leiden at the time. (Sessions that owner Marius van der Ploeg kept organizing until 2017 when he finally retired after 25 years.) The four band members found each other in their love of Celtic folk, but from the very start were not afraid to incorporate new styles and instruments. You could say the band was an instant hit in the folk scene, playing on the Folk Battle finals and at the Midwinter Fair both in 2011, only a year after their first official band picture was published. Followed by Summer Darkness in 2012 and 2013, the Gothic & Fantasy Fair in Rijswijk 2013 (now known as the Fantasy Fest) , Keltfest and Elfia, Arcen in 2014 and to top it all off their first Castlefest in 2015! 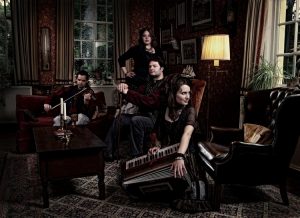 In 2013 Finvarra released their first album, simply called Finvarra, filled with eleven lovely European folk songs. European, because the band combined well known Celtic folk traditionals like The Well Below The Valley and The Cliffs Of Moher, with more Balkan influenced songs like The Wind That Shakes The Barley or Jovano Jovanke/Ciuleanda, and even their own interpretation of that famous Led Zeppelin song: The Battle Of Evermore. In 2017 the band announced they would be back in the studio, and then it went rather quiet around Finvarra. A silence that was suddenly broken early this year with the message I quoted above, announcing both the birth of the new album and the end of Finvarra as a band. Lanterne starts as a warm blanket. The first song Banks of The Edisto is a touching ballad, featuring not only Dieke’s warm, slightly jazzy vocals, but also Patrick’s pleasant guitar and Corné’s lovely violin solos. The original is by the American folk singer-songwriter Dayna Kurtz, recorded on her 2006 album Another Black Feather…For The Wings Of A Sinner. (An album well worth listening to if you love American folk music, with touches of jazz, Americana, and the occasional influences of raw 60’s protest songs, but I digress.) Dayna Kurtz recorded Banks Of The Edisto as a ‘small’ banjo and vocal ballad, Finvarra made it sound much richer, more orchestral and gave the song a real Celtic folk feel. Both, I have to say, are lovely versions. With Finvarra’s Song, we keep that strong Celtic orchestral feel. Finvarra, together with Alain Labrie (also known for his flamenco band Labryénco), 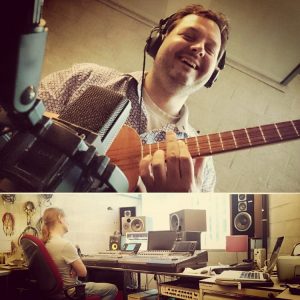 who recorded and produced the album, really managed to give Lanterne an overall wonderful and rich sound, very cleverly working with stereo effects and delicate touches of musical decorations at unexpected places to achieve that. Gwendolyn’s powerful welsh folk voice cuts right through all this richness, creating a wonderful contrast within the song that makes it even more powerful. Listening carefully I can’t help spotting the slightly Spanish sounding acoustic guitar chords, some Mediterranean flavours crawling in or the clear Eastern European violin solos spicing up this Celtic folk song. Something that clearly continues on the instrumental A Bruxa/Flatbush Waltz. The guitar and violin melodies lead my mind to a place somewhere between northern France and Andalusia. On a warm evening under a star-filled sky. This is actually the main difference between this record and Finvarra’s first album. On the first CD, the different influences were clearly divided over single songs Some sounding Celtic, some French, and some clearly eastern orientated. On Finvarra’s latest record all those influences have gelled together into one single sound, making Lanterne sound much more coherent. Another difference is the lead role Dieke took as a singer. Besides Banks Of The Edisto she also sings the lead on the Spanish sounding True Unfaithful Love and the absolutely beautiful ballad Motherland, a true gemstone in my opinion. Easily one of my favourite songs on Lanterne. Dieke’s low, warm and jazzy voice works SO well with the European folk style Finvarra is now playing. listening to this I can’t help but hope that somewhere in the future Finvarra will come together one more time, either to play live for us all or even to record new music. The way the musicians fit together in these songs is pure magic. 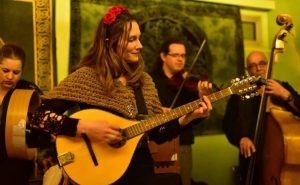 The instrumental Whiskey & Ouzo tells it all actually. On Lanterne Finvarra successfully blends the Celtic world with the Mediterranean, giving true meaning to the term European folk. I have nothing more to say really, this is a must-have album for all who love folk music. It is as simple as that. Still hesitating? Put on the title song Lanterne and let Gwendolyn win you over herself. Another wonderful song on a wonderful record of a wonderful band. It is so sad to see them go, but I am so happy they leave us while they are ahead. Best giving away present I have had in a loooooong time. – Cliff editor: – Anna Schürmann pictures: – Eline spek, early band picture (2010) – Duane Teske, official band photo (2013) – Finvarra studio picture – Finvarra