Down Under, but on top of the world – Part 1 We have received word from Bob, our Scout in Australia!

During a good talk I had with a local musician I found out that there were two Irish pubs in town. One of these was supposedly fake, but the other was the real deal. After finding out which was which, I went to McGinty’s Cairns!

In the afternoon all was quiet, not much going on, but I did manage to sneak a peek on who would be performing that evening. McGinty’s features live performances every Thursday.

Evening came, and around 18:30 a lovely duo called SISTERIX took to the stage. These gorgeous girls came all the way from Dublin. One playing the guitar and the other violin and tambourine, and with both of them singing, they swept the crowd away with their performance of Irish traditionals.

It was a great evening, where I even managed to surprise the owner of the pub by singing along with a lot of the songs!

This is my folk discovery so far, so for all you folk lovers in and around Cairns, McGinty’s is the place to be!
(I will discover more of these great establishments, I’m sure!) 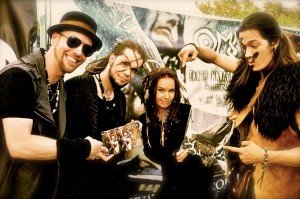 And speaking of sharing, we have a little something to celebrate this! 😀

Our friends of Omnia have donated something very special for us to give away. Waiting for a lucky winner are an Earth Warrior T-shirt and a copy of the Earth Warrior album, signed by all the band members.

So go like our page (if you haven’t already) and share the post (remember to set it to public) and maybe you will be the new owner of this Earth Warrior package!