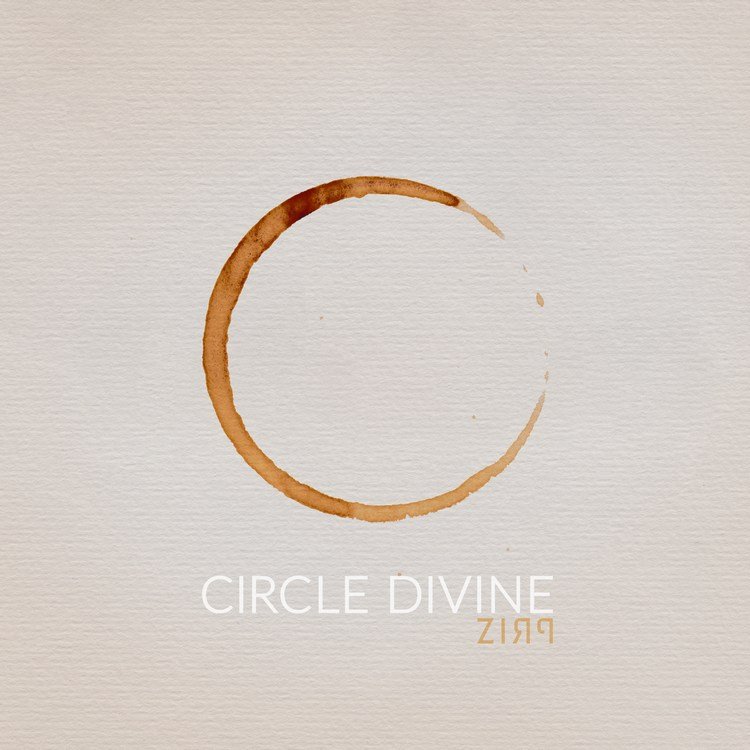 8 years after their debut album Drehvolution, ZiRP has brought out their second record Circle Divine. It would be really easy to call ZiRP the hobby band of their most famous member Stephan Groth, but that would be wrong for two reasons. One: it would take away from the other members, all true musicians in their own right; and secondly: ZiRP already existed BEFORE Stephan joined Faun. It was actually ZiRP’s music that caught the eye of one Oliver S. Tyr, and made Stephan a Faun member. ZiRP itself started when Stephan Groth was looking for musicians to start a folk band. Rhythm guitarist Olaf Peters was the first one and he turned out to be the perfect musical partner, with great picking techniques. Soon the duo were writing tunes together. During the writing process drummer Florian Fügemann, at that point best known for his work with classical pop band Stilbruch, joined ZiRP; and as a trio, they recorded ZiRP’s first album Drehvolution, an album that came out in 2012. Two tracks of Drehvolution feature guest bassist Florian Kolditz, something that, as Stephan explains: ‘Felt so good that he became a permanent member in 2012 and our line-up has remained unchanged since then.‘

After the release of Drehvolution and the subsequent tour that lasted till 2015, it went rather quiet around ZiRP, most likely caused by the huge success Faun was having with their music. A silence I thought was a shame, actually, because Drehvolution was filled with lovely experimental balfolk tunes, showcasing all the possibilities of the hurdy-gurdy as a lead instrument. The song La Toupie was one of my favourite balfolk songs for a long time. I just loved that experimental fusion Drehleier (hurdy-gurdy) sound. In March of 2018, the silence was broken again by the first concert in 3 years, and in September of that year the band made the announcement we had been waiting for: ‘We finally started with some pre-productions for a brand new ZiRP album and there is some serious progressive hurdy-gurdy fusion folk going on.’ Well, the brand new album is now out and as they promised us: there is some SERIOUS progressive hurdy-gurdy fusion folk going on! 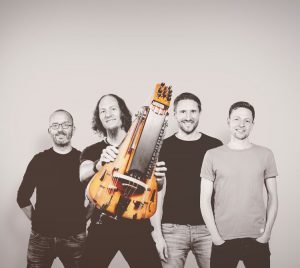 From the first notes of 5-4-0 I am blown away by the awesome sound of -wait for it- the rhythm section! Yes, I know, not the obvious thing to start a review with, but e-v-e-r-y good band needs a good rhythm section. The bass and drums are the backbones of any band; the solid platform on which the soloists get to shine. Quite often these musicians play in the background, quite happily doing their thing as the lead vocalists, guitarists or flutists take center stage. Not with ZiRP. Both Florians are soloists on their own account and they both get plenty of opportunities to shine. The result is an amazing groove throughout every single song. Did fusion funk folk exist as a genre? It does now! Let’s put the spotlight on ZiRP’s members one by one. Florian Manuel Fügemann, as I said, is a folk/rock/jazz drummer who has studied drums since the age of 8. He studied with Nils J. Fahlke at the Robert Schumann Conservatory in Zwickau for three years. After that, he studied pop/rock and jazz drums at the Hochschule für Musik Carl Maria von Weber in Dresden, gaining knowledge in styles as diverse as pop, rock, Latin, fusion, funk, and jazz. To finish his impressive resume he also studied to become a teacher for music and English in German highschools. (What a cool teacher to have!) From his jazz music experiences, Florian developed this slick sound, this ease of playing that reminds me sooo much of former Omnia drummer Rob van Barschot. Just like Rob, Florian’s drumming just sounds effortless. You can just hear him throwing out drum fill after drum fill without shedding one drop of sweat. Listening to him play, I can just envision him sitting there behind his kit, just like Rob; looking like he was eating his midday sandwich while playing one amazing break after another… and well, look at the video below. Look at him play! Do I need to say more? And there are plenty of moments for him to shine. Listen to the wonderful groove he is laying down halfway through Zirpelloise; the effortless fills in Bourrée Inkarnation; the flowing fusion rock groove together with Florian K in Odd Bourrée; Circle Divine or Uhrovec (hello Mother’s Finest); the double bass drum in 5-4-0… I could go on and on. But I won’t. What I will say is that Florian Fügemann not only studied drums, percussion, and vocals, but before that also piano. And on Low Lights he returns to his first love again in a beautiful tribute from the whole band to his father Jürgen Fügemann. The whole story behind this song can be found here.

I already mentioned the other half of this amazing rhythm section: Florian Kolditz. Readers who are well connected with the Berlin music scene will know his name from the projects and bands he is involved with, as a bandmember, guest musician or session bass player. One of the most interesting bands he is involved in at the moment is the band Makroskop. It is kind of a jazz Fusion band with a flamenco touch. But, as he says himself: ‘ZiRP is unique and I wouldn’t miss it in my life anymore.‘ Well, none of us would want to miss this modest but gifted bass player in ZiRP anymore. Together with Florian F, he brings the funk, the groove, and even the ’70’s disco sound to ZiRP. 5-4-0, Bourrée Inkarnation, Circle Divine, all those songs have such a wonderful flow because of his bass playing. Such an effortless groove. He marries his bass sound so wonderfully with Florian’s drums. Must be the name they share. On rhythm..our musical groove machine… F und F! But all joking aside we are not done yet. Like a true jazz bass player Florian Kolditz can play solo as well! Just listen to Mosaic, that cool bass guitar solo with the cello and horns under it. A stunning moment in this wonderful song. Or the beautiful duet he plays with Olaf and Stephan on Moon Mazurka And then there is that magnificent slapping bass guitar in Odd Bourrée and Uhrovec. Mark King, eat your heart out. Do I need to put a spotlight on Stephan Groth? I think we all knows how well he finds his way around a hurdy-gurdy -the first CD Drehvolution and Stephan’s work with Faun are proof of that. So it shouldn’t come as a surprise that on Circle Divine, this Drehleier giant is again weaving one beautiful balfolk tune after another in ZiRP’s music. Still, there are plenty of moments on this album where I’m just astonished at how beautiful it all sounds. The awesome solo at the end of Circle Divine for instance; with an effect on the hurdy-gurdy that makes it sound sooo similar to my favourite Roxy Music song ‘If There Is Something‘. Or that cool acid rock effect on 5-4-0. Balfolk meets Tangerine Dream. Or the stunning prog-rock solos scattered over Odd Bourrée. Just have a look at the video below and watch the speed of his fingers, amazing! And that are only the highlights. But Stephan has another talent that may be less known to the public: he also knows his way around the low whistle. Listen to Kaleidoskop and you might be surprised to hear that THAT is Stephan as well. It could just have well been a track on one of Hamish Napier‘s latest albums. With all these soloists around him, rhythm guitarist Olaf Peters’role in ZiRP is more ‘hidden’ in the background. His rhythm guitar is the glue that holds the whole band together. He is the salt and pepper of the band, the one that makes everything else taste wonderful. And in that way he is just as important to ZiRP’s sound as any of the other three bandmembers. You hear it so clearly on Circle Divine. His fine guitar chords almost disappear in the background when the music swells, but are very much in the foreground when the music calms down. For that reason alone, the title song is one of my favourite tracks on this CD. Another beautiful moment is Moon Mazurka, an instrumental ballad that gives Olaf the time and space to not only shine himself but also to play two beautiful folk duets, one with Florian Koblitz and the other with Stephan. But he is doing it all over Circle Divine, making him such an important part of the ZiRP balfolk meets fusion funk style. I already mentioned Circle Divine as one of my favourite songs on the album, but I have a lot more. Zirpelloise with its cheerful Spyro Gyra meets balfolk sound is one. Or Mosaic, a song combining the oh-so German sound of a horn section with progressive balfolk fusion folk. Another clear favourite is the song Odd Bourrée, a song I could listen to all day. Clearly, another prog-folk classic to be. Not to mention Uhrovec, a song that just combines everything that is beautiful about this album in one song. Or the beautiful instrumental ballad Low Lights. What impresses me most about this album is how effortless it all sounds. I constantly have the feeling that the band is just flowing along. As if they are four Tour de France winners just cruising up Alpe d’Huez on a Sunday afternoon, chattering about while we mere mortals are gasping for air trying to keep up with them. You can just sense that, if they wanted to, they could blow us away with mesmerizing breaks, mind-blowingly fast solos, and amazingly complicated compositions that would make every wannabe folk artist stop before even trying. But why should they? This album is made for the fun of making music, not as a vehicle to show off your skills. It is all about the pleasure of playing. The joy of listening to each other’s skills and then adding your own groove to that; emphasizing each other’s talents. So they are just cruising as if it is Sunday afternoon. Make it sound like all of it is really easy. And in that lies their true talent. Because trust me, this is NOT easy at all. This is progressive fusion balfolk funk at its very very best! – Cliff Editor: Iris Cover art: ZiRP Photography: Florian Manuel Fügemann