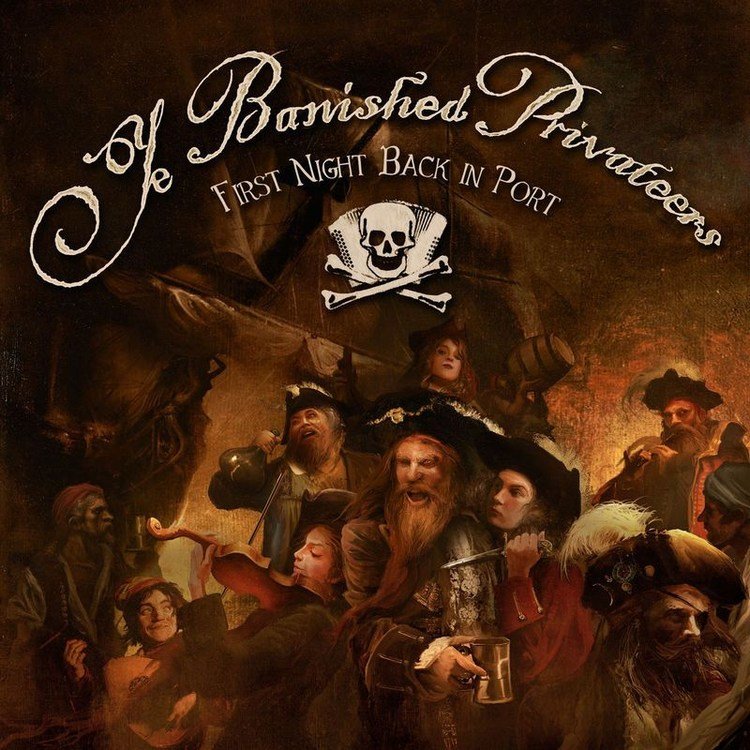 It is June the 30th, in the year of our Lord 1717. Under the black shroud of a storm-swept night, a dark ship creeps into an unknown harbor of a forgotten town, somewhere deeply hidden on a jagged coast. Her dark, battered sails are flapping in the stormy winds. Her black flags all down, mourning the loss of all those who were left behind; in the treacherous waves of Cape Horn; the deep seas of the Pacific and the distant shores of far-away Georgia. As the ship, loaded with the bounty it seized in the last two years of her travels, finally moors for a well-deserved rest, her crew, pockets filled to the brim with gold and pearls, sneak off the gangboard into the dark alleys surrounding the old wharfs of this godforsaken place. Silently we follow suit. Making sure we hide in the shadows of the old houses in this dark side of town. Nothing moves in the relentless rain. All sounds are muffled in the gusts of wind that shriek through the broken windows of abandoned buildings. A big rat slips into a gutter as we see the crew disappear in a black alley. 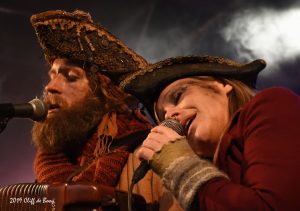 We wait until the gusts of rain die down for a brief moment. From the alley comes the soft sound of laughter and music. At the end of it, a bright light pours under an old crooked, wooden door. A black cat, jumping into the window opposite of it, pushes open some filthy rags that once were curtains. For a brief second, it reveals a huge figure, using a huge knife to tickle a poor sailor’s neck. As we near the door, it suddenly cracks open, as the poor sailor is thrown into the cold night, his head is soon to follow, rolling down the alley till it stops in front of our feet. Through the – now open – door we can see a busty lady singing on top of a dirty bar, holding a big bottle of rum. Around her are the locals, their mugs raised as they roar along with her song. Amongst them are the crew. Their eyes already red from the smoke of pipes, the many pints of beer and the sight of the ladies sitting there on their laps. The ladies’ eyes are firmly fixed on the filled purses of the men, whose cheeks they are now kissing. As one of the sailors joins in with the song, the busty lady nonchalantly crashes the bottle on his bold head, sending him swirling for the floor. With a loud roar, the men grab him, head and feet. Within seconds he’s flying out the window, scaring the living daylights out of the black cat that is grooming herself just at that moment. The men return to their drinks, one or two of them counting the gold they suddenly have in their hands. Welcome in the Schwarzer Kater. The only place Ye Banished Privateers can call home. As they celebrate their first night in port. 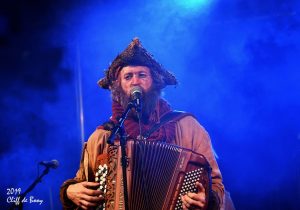 Ye Banished Privateers are a Swedish pirate crew that sails the concert halls and festivals with their catchy pirate folk music. The origins of the band go back to 2008 when Peter Mollwing (last picture below) and Björn Malmros (left) started asking other musicians to join their pirate folk idea. The idea clearly caught on because 23 (!) different musicians are listed as band members in the credits of First Night Back In Port, which is their 3rd CD. At a concert you can easily expect 12 to 15 band members to be there at any given time, putting up a show that is as much a visual spectacle as it is a concert. If they are in the neighborhood, this is a band of pirates you don’t want to miss. 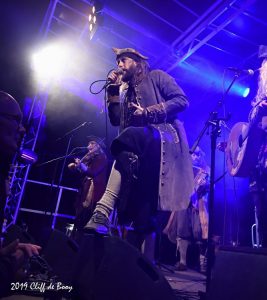 The basis for Ye Banished Privateers’ pirate folk sound is a mix between shanty songs and traditional folk with an occasional gypsy flavor to top it all of. Ye Banished Privateers’ main weapons of choice are a fiddle, flute, accordion, and banjo, giving the music a real positive, feel-good vibe. All poured into some grand, musical like arrangements, bound to get a big smile on your face. But the strongest point of Y.B.P are the vocals. At least 5 crew members share the lead vocals, male and female, covering the whole range of 17th/18th-century sailor and buccaneer life. Quite often, the whole crew is enlisted to do the backing vocals. The big sound of this choir and the 23 piece band is what gives Y.B.P’s pirate folk its unique folk/musical feel. As I said, lyrically Y.B.P tells the tale of the early 18th century sailors. It all starts with the story of poor Annabel buried in Georgia, a really strong ballad impressively sung by Magda Anderson. We hear stories of sailors making deals with the devil. Tales are told of sailors press-ganged in service. There is a homage to rum -not just any old rum, no Cooper’s rum!- and there is the sad love song of a man trying to keep his lady (!) onshore, all of them sung with the same power and authenticity. 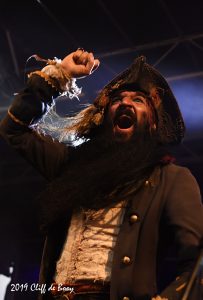 And that is the real magic of Ye Banished Privateers. Their music doesn’t feel like a gimmick. You believe them. They ARE the crew of a ragged ship. The scum of the seven seas. The whole CD pours out sailor’s folk. If it’s ballads like Annabel, Skippy Aye Yo or A Mermaid’s Kiss, mid-tempo sing-alongs like Cooper’s Rum, All The Way To Galway, I Dream of You and A Night In The Schwarzer Kater, or up-tempo dance songs like First Night At Port, they are all well-composed , instant sing-a-long, feel-good songs. So get out your sailor’s hat, your eye patch and your bottle of rum. And welcome to the world of Ye Banished Privateers! -Cliff -Editor: Diane Deroubaix -Pictures: Cliff de Booy