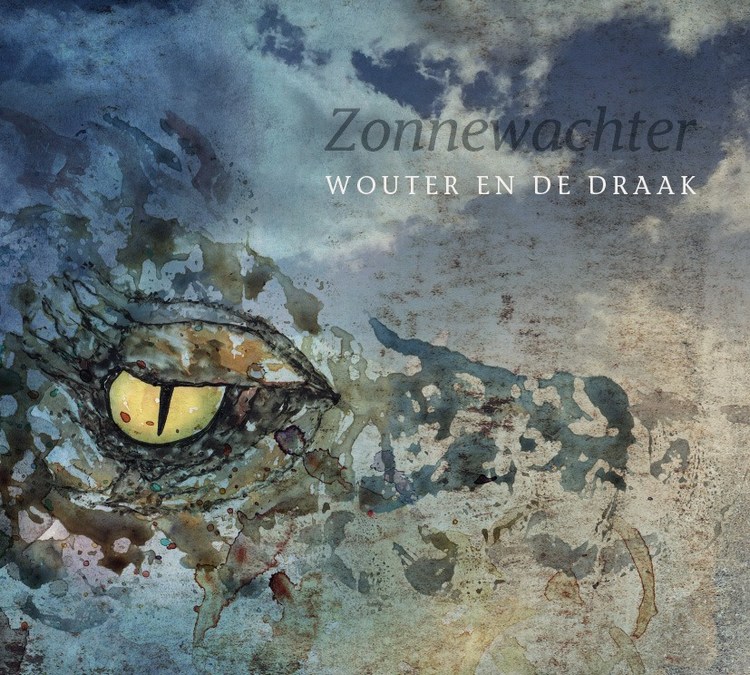 In 2018 I had the pleasure of reviewing Wouter en de Draak‘s self-titled debut album. In that review, I complimented Wouter en de Draak on their instrumental balfolk CD, and called it a wonderful mix of Breton folk music with a touch of Argentinian tango-like vibes. I called it a slightly melancholic album, in a positive way though. -‘I cannot point out a single best song. This CD itself is the highlight. It is an album of consistent high quality. And it was a pleasure, a real pleasure to listen to. Although I used the word ‘melancholic’ a lot it’s not a sad CD. On the contrary. Yes, it makes me nostalgic, but in a good way. Remembering summers filled with fun and laughter. In an odd way, it makes me feel at home. It feels like a warm musical bath in which I can unwind and relax. This is not a ‘simple’ CD filled with balfolk tunes. This is a listening experience that will give you many enjoyable moments. Well done!’ Listening to the debut album three years later, I still stand by every word I wrote then.

Well, three years on, and the follow-up album, Zonnewachter, is turning its rounds in my CD player. To be honest, it has been doing so since May, so I have to start this review with an apology. 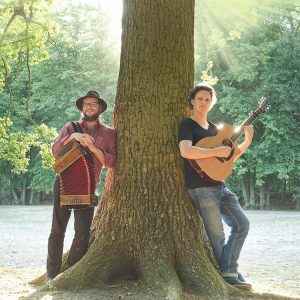 Yes, I wanted to write about Zonnewachter a lot sooner but somehow life got in the way, so it’s only now that I have found the time to do so. ‘Better late than never’ as the saying goes. And trust me, this album is definitely worth the wait! I still love Wouter en de Draak’s debut album, but I consider Zonnewachter to be even better. Or should I say different? Yes, I think that is the better phrasing. Joris Alblas (acoustic guitar) and Wouter Kuyper (diatonic accordion, bagpipes), who together form Wouter en de Draak, have once again invited their friends Isaac Muller (Irish flute, tin whistle, bombarde), Frank van Vliet (trumpet, flugelhorn) and Roland Uijtdewilligen (percussion) to join in, and just as on the debut album they play a big role in the overall sound of Zonnewachter. But it hasn’t turned out as a ‘Wouter en de Draak‘ part 2. No, two new sounds were introduced on this album: the hurdy-gurdy (played by Harald Bauweraerts) and the bagpipes (played by Wouter Kuyper himself). And with the addition of these two instruments the sound shifts away from Brittany into …, ahm…., well…., ahm… I can’t really define it to a specific region anymore, to be honest, but trust me, it’s beautiful. The opening track, Fireflies and Mosquitoes, still has that lovely French feel to it. That feel of a vibrant early summer evening; somewhere warm; with good friends around; a lot of wine flowing; and an occasional whack of the hand to get rid of those pesky buzzing garden friends that no one likes but always seem to be there. At the start of the second song Legopolska, Wouter and Joris again take you to Brittany. Wouter Kuyper’s accordion sound is so quintessentially French to my ears. So full of emotion. It melts me away every time I hear it. But the Irish flute and tin whistle sound coming in during the later part of the song pull the melody away from the west of France, towards the green fields of Éire, their notes seem to float over the dark waters of the Irish loughs. Especially that tin whistle, light as a feather, faint as a fairy, dancing lovely above the music, truly magical. As I said before, at this point it doesn’t sound Breton anymore, but I also can’t call it Irish/Scottish folk. It’s a beautiful blend between the two. Scottish Périphérique is a second example of that stylistic blend, (it’s even blending together in the name of the song itself), but this time we travel to the Scottish Highlands, we overlook the vast lochs of the Scottish coast, the sound of the bagpipes drifting away on the wind towards Ben Nevis. I really like this blending of the two styles. Both Legopolska and Scottish Périphérique mix a warming melancholic feel with a cheerfully upbeat smile. It gives the songs a real sense of depth, an extremely pleasurable listening experience. The best moment is halfway through Scottish Périphérique, where you will find a beautiful duet between Wouter on bagpipes and Harald on hurdy-gurdy. When you read this I can imagine you’ll think this will sound really loud (and rightfully so, both instruments can be really in your face), but no, surprisingly, it is not. Both soloists play their instruments with such delicacy that it reminds me a lot of the beautiful blending solos on Trolska Polska‘s Eufori album, sometimes in harmony with each other, sometimes challenging each other, chasing each other’s notes, making Scottish Périphérique my first highlight on this CD! 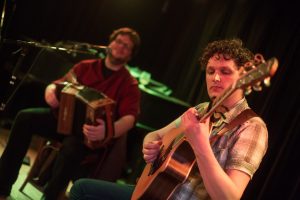 It is instantly followed by highlight number two: the song Mazurmeau (a mazurka). It starts with the open sound of Joris’ DADGAD guitar, the delicate touch of Wouter Kuyper’s accordion making it into a touching ballad. The Irish whistle solo of Isaac Muller just adds to the tender feel of the song. But when Frank van Vliet adds his muffled trumpet, I really get swept off my feet. So delicate! So touching! The duet that follows between trumpet and flute is truly breathtaking. Just as with the debut album, the guest musicians are not there to fill up the sound. NOOO, they are such an important part of this stunning CD. All of them are capable of putting so much emotion and feeling into their instruments that I constantly forget this is an instrumental album. Or maybe it just isn’t. Maybe it ÍS a CD filled with voices. It just happens to be instruments instead of vocals communicating the emotions, that’s all. The guitar intro of Costa Gwad takes me back to Monsieur 7, my favorite song of the first album. But before I sink into a pleasurable melancholic mood, the upbeat, jazzlike rhythm gets me on the edge of my seat again. That’s the story of Zonnewachter actually: where the debut album was a clear trip down Brittany, this album is an accumulation of different Western European styles. Lovely to dance to, and a joy to explore on your couch with a set of headphones. Just listen to the skills of the musicians, and the way their sound blends together. All of them so talented, none of them showing off, all of them playing in service of the song. This is what makes Zonnewachter such a pleasurable album to listen to. The song is always in the foreground. Be it in a ballad, like in the song Turning 84 which is a beautiful blend between Breton folk and an Argentinian tango feel; a bourrée like Dusgemint where Wouter en de Draak mix up Celtic folk with medieval a medieval feel, (Especially in the way Wouter uses his bagpipes. I mistakenly took it for a bombarde at first); or the song Gavotte Caresse which strongly reminds me of the instrumental ballads of the German band Cara, while Berggavotte has that cool medieval vibe happening again. Speaking of the bands musical skills, I seriously thought I heard a set of Uilleann pipes the first time I listened to Gavotte Caresse. Wouter has such a delicate touch that I still cannot believe it’s actually bagpipes I hear. I never thought I would say it, but the duet between the trumpet and the bagpipes sounds so light. It truly is as if the instruments are stroking your ears. Stunning, truly stunning. I could name all twelve songs on Zonnewachter, I truly could. Zonnewachter is a wonderful album to listen to. It is also a true balfolk album, filled with waltzes, two gavottes, a jig, a polka and a kost ar c’hoad (a circle dance traditional to Brittany from the same family as the gavotte), a polska, a scottish, and a mazurka. With Zonnewachter Wouter and Joris have made an album that is still clearly connected to the music of Brittany, but the duo has incorporated so many other elements that it is hard for me to define it as one certain style. The big question is: ‘Do I need to?’ The answer is: ‘No, I do not!’ Good music has no boundaries. It is universal, just like dance is. It is a language we ALL share. Zonnewachter can be defined as Western European balfolk with an Argentine touch. It can also be defined as a highly entertaining instrumental folk album. If you don’t have it yet, make sure you put it on your wishlist. As for me, I hope Wouter en de Draak are already planning their third album, because I can’t wait to see where their music will lead them next! Cliff editor: Iris album Cover: Tineke Lemmens pictures: Wouter en de Draak