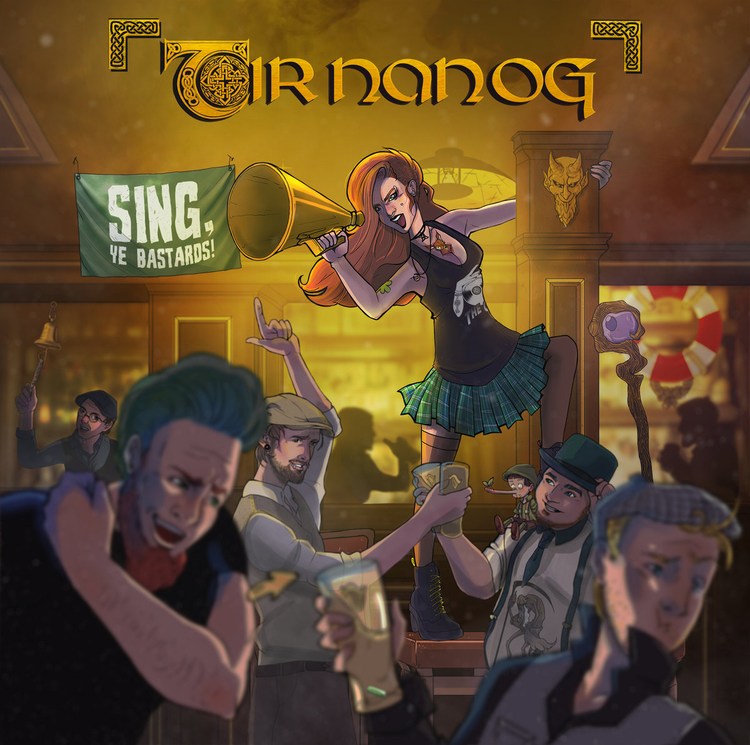 Dear reader, get yourself a comfy seat, a nice slice of Irish barmbrack, and a good glass of fine Irish whiskey, ’cause this review may take a while. Analysing Tir Nan Og‘s fifth album Sing, Ye Bastards! left me with five pages of notes and an instant urge to tell you all about it. For those of you who want to have dinner early, here is the short version: if you like good old Irish party folk with a cool stadium rock production, this is your CD. Get your best boots on, finish your Irish stew, make sure you get yourself to the nearest pub, and party it down till the break of dawn. (Or all the booze is gone, whichever comes first). So, now that the warning is out, I can go all nerdy on this CD without feeling guilty about it. After their strong 2018 album From The Gallows, Matze (violin, nyckelharpa), Sarah (flute, vocals), Joggl (four-string electric bass), Robert (guitar, vocals), Andi (whistles, pipes, vocals) and Volker (drums, bodhrán) have released yet another hit album, full of weird hooks, cool riffs, and groovy breaks bound to give you the best evening you’ve had in a long time! Now I do realize that names like Matze, Joggl, and Volker don’t sound particularly Irish, and you would be right in that assumption. Tir Nan Og is a Bavarian band, but I didn’t really notice. “Cool Irish band,” it says in my first notes: “Is that female vocalist American?”.

No rest for the listener Not surprising because Sing Ye Bastards! feels Irish from the very first note played. A fast, catchy violin riff starts it all, a first drum break follows within seconds, effortlessly flowing into a catchy verse with an added whistle for some bonus Irish cheer. The chorus is an instant sing-along affair that then flows into a short violin solo with groovy bass to keep your feet moving. Back is the drum break, some first epic female backing vocal, it’s all there…, and we are only 90 seconds in the song. Damn, this band is something else! They throw all their strengths at you, and almost all at once. Strong male and female vocals, more musical twists in one song than you would normally hear on a whole album, even a 10-second drum solo towards the end, and we are still only talking about the first song on the album! “God almighty, have mercy on our souls” the band sings. “God almighty, have mercy on our hearts” I say. This is something else! The official video for Fear Gorta For a wee moment, I think I will be able to catch my breath on the second song: Last Order. That thought only lasts for the slow acapella intro Tir Nan Og sing. After that the drums, bass, and bagpipes take control of my feet again, and of I whizzing go. Someone tell the devil and ‘mye’ wife that they’ll have to wait a while, pour me another pint, and let me dance!! This stuff is awesome! The only moments you are allowed to catch your breath are the moments of silence separating the songs from each other. Ok! Hold on! Time to get out of the Maelstrom, to swallow a Green Pill, slow down, and get some sense out of myself. Soooo, to say something sensible: Tir Nan Og plays a very catchy version of punky Irish folk-rock. Extremely catchy actually. The cool thing is that they do that mostly acoustically. No distorted guitars, no screaming vocals, no nothing of that. Just the power of good old acoustic instruments, strong vocals, a slick production, and some darned good songwriting. Let’s start with that last bit first as it is the stand-out thing in my opinion. Tir Nan Og have a knack for surprising you, every 20 seconds it seems. Twists, breaks, solos, harmonies, they play with it as if they were a prog band. Fear Gorta, Last Order, Maelstrom, the whole album is just full with them, making this a highly entertaining album. Tir Nan Og, a steaming folk band So what are we talking about style-wise? Again, Tir Nan Og go for variety. Fear Gorta and Last Order are steaming acoustic party punk-folk songs, Maelstrom reminds me of the latest Pyrolysis album, especially in the vocals. Highlight in this song is Matze’s furious violin solo. I’m pretty sure sparks were coming off his strings when he played that in the studio. What I also love are the harmonies. The three voices of Robert, Sarah and Andi fit nicely together giving the music even more power, but that violin solo…darn, that one is addictive! The Wanderings Of Oisin gives a more poppy feel to Tir Nan Og’s folk-punk. The intro keeps reminding me of something, but I couldn’t tell you what it is. It doesn’t matter. Again the whole song is catchy as hell. Especially the flute melody Sarah treats us with. Another strong part of Tir Nan Og’s sound is Joggl’s bass playing, not only on this song but over the whole album. I love the groove he adds to the songs. It gives Tir Nan Og’s music even more power, and a lot more dance credibility. Getting back to The Wanderings of Oisin; the chorus at the very end of this song, featuring Sarah on vocals, is one of those many cool curveballs the band constantly throws at you, as is the surprising acapella end. 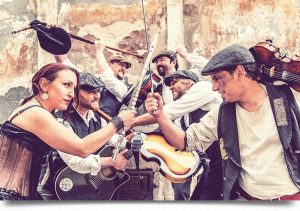 With the song Green Pill, the feel of the music starts to shift from acoustic punk-folk towards folk-rock, but still with a strong Irish flavour to it. Let’s call it a nice blend of German punk-rockers Donots and our own Harmony Glen. A special mention has to go to Sarah’s whistle solo halfway through the song and the violin finishing it all off weaving in another famous tune. [Editors note: That would be Cooley’s Reel] We’ve Been Everywhere has that same rock anthem feel to it. A big part of that can be attributed to the production. Where the previous album, From The Gallows (2018), still had a rougher, more punky feel to it, the production of Sing, Ye bastard! is fuller, rounder; there are more layers in the vocals, more effects; the bass and drums have more ‘oomph’. it all adds up towards a strong stadium rock feel which I love. I also love the “weird” Al Yankovic rap-part Andi pulls out of the bag in this song, soon to be followed by what seems to be a guest appearance of the Red Hot Chilli Pipers. Go Andi, go Andi!!! Strong Harmonies One song further and we go Greek, combined with a fun bit of German Hoompha folk for good measure. There are many bands that say they have no limits when writing music. Tir Nan Og clearly wants to take that statement one step further! So Sláinthe is a mix of Greek, Irish, and German influences. Next song I Sold My Soul starts with a bagpipe riff that could easily have been written by The Sidh‘s Iain Alexander Marr. The song itself is a catchy Pyrolysis-type folk-rock anthem. The second single: I sold My Soul On Stone Cold Heart Sarah gets to show off her vocal talents. Both she and Robert have big voices that can easily hold their own against the powerhouse folk the band is playing. I’m just loving all of this, song after song. Every song has its own cool moment, its own cool twist. Listen to those driving drums in Stone Cold Heart. If you didn’t hear those folky whistles and violin tunes it could just as well be a drum fill by funk-rockers Living Colour. Especially when Joggl joins in on his electric bass to “funk” everything up even more; one of the few moments the band goes into a distorted overdrive. Sarah’s strong vocals finish this power ballad perfectly. 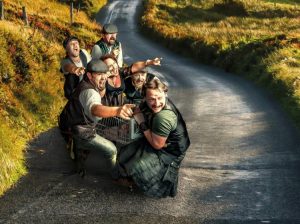 Sea of Sorrow is the first real moment of peace on Sing, Ye bastard!. An acoustic ballad that could easily be found on a Golden Earring album, with Robert taking on the role of George Kooymans. I’m loving Robert’s vocals throughout the whole album. Just like Sarah, he has the perfect voice for this band. Strong, powerful, with just the right amount of hoarseness, and capable of giving every song the colour it needs. May I also highlight the harmonies that brighten up the whole album? They pop up all over the place, but the most beautiful one has to be the ending of Sea Of Sorrow. Goosebumps. The surpises keep on coming Tir Nan Og are stíll not done surprising me. The Song Remains almost starts like a soundtrack, quickly flowing into something I can only describe as symphonic prog-folk with a touch of theatre in it. The call and response singing lines at 1:34 even remind me of Ayreon. Are there no limits to the things this band will include in their music?!?!?! Speaking of Ayreon, I could swear the flute solo following after that could have been played by Thijs van Leer (Focus), one of the prominent guest musicians on Ayreon’s The Electric Castle. I think by now it’s clear Tir Nan Og are not ‘just’ a punky acoustic folk band. Nope, this is a full-grown folk-rock unit. Inventive in their songwriting, cheeky in every note they play, with a strong link to their Irish folk roots… The final twist Now we get to a fun moment. First I’ll let you read the original text I wrote to end this review: ‘…with a strong link to their folk roots. The Scrum /Harmony Glen-like power ballad O’Hanlan’s Last Words for instance gives you clear proof of that. What a band…WHAT A BAND!! And this is the final twist the band threw at me, it is Robert writing me in response of the review: ‘O’Hanlon’s Last Words was actually performed by Harmony Glen as a guest track on this CD. (A cover of a song from our last CD). That would explain why I thought it sounded a lot like Harmony Glen yes (blushes). And with all of you laughing it is time to round up this review. It is high time for CeltCast to host their own St. Patrick’s day folk-rock concert. I say put Tir Nan Og top of the bill, co-headlining with Harmony Glen of course, and Pyrolysis as support act. Now that would be an evening! Can I already reserve my tickets!? Pretty please!? Tir Nan Og performing live at Folk Am Neckar (2019) – Cliff Editor: Iris Cover art: Santana Raus: Santichan illustration pictures: Andi Fingas Picture editing: Andre Freitag

We are waking up to the last day fo Festival-Mediaval ! Starting up is a little bit difficult after such an amazing second day. We are still a bit a bliss.

Yesterday’s music was fantastic! Bands like Leaves’ Eyes , Celtica -Pipes Rock , Irregang , Tir Nan Og , Elane , and ORO – Music from the wild, wild East we could only bask in the beauty of music, and then, the day was closed with an epic show by Heilung !

We are, already, a very happy and blissful team but we get to do it yet another day! Stay tuned for more livestreams and pictures from the 3rd day of Festival-Mediaval XII. Here are some shots from yesterday!

It has taken a few days but we have been coming down from our Keltfest-high ever so slowly. With huge smiles on our faces we have been working non-stop to ensure you all could enjoy even more of this festival. Our livestreams have all been tagged and our photographers are getting their pictures ready to be shared with you.

And for those who were more into the country roots and blue grass, there was fun to be had with Mumfords Calling , Barnyard Tea and Moonshine Brigade .

There are many more festivals coming soon but for now enjoy the first of our pictures, feel free to tag and share!