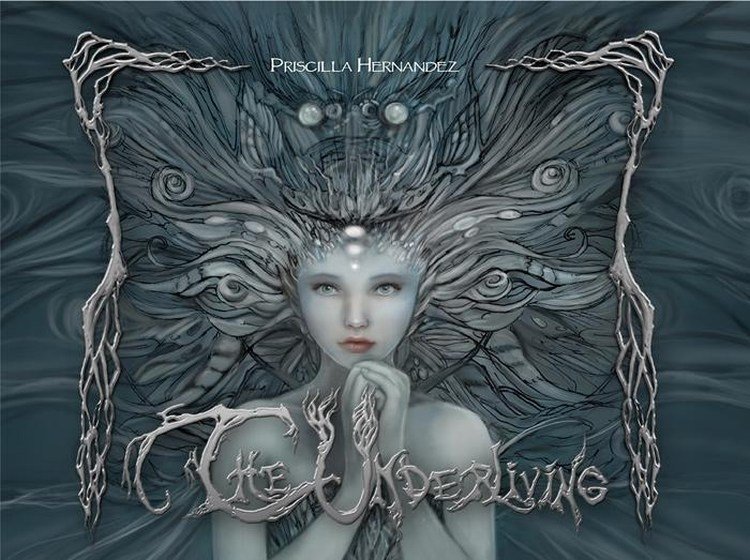 I usually don’t start a review talking about the artwork of it, but in the case of Priscilla Hernandez’s second album, The Underliving it is the only obvious thing to do. The fantasy folk scene is known for the beautiful artwork with one being even more stunning than the other. You probably remember the beautiful booklet that covers Mythos, the second Waldkauz album, or the equally impressive booklet accompanying Eden, that famous concept album Faun released in 2011, The double-sided picture book illustrating the Riven double CD by Jyoti Verhoeff is another example, not to mention the illustrated fairy tale that was added to Omnia‘s Pagan Folk Lore DVD. Well, I can tell you that the casing that Priscilla Hernandez designed for her The Underliving album can hold its own with all the aforementioned books. Not only is it 3 centimetrers longer than a normal CD casing, it also filled with lovely fantasy drawings in Priscilla’s own slightly eerie, slightly gothic, slightly fairy tale style. Blended between them are photographs edited and coloured in the same blue-greyish hue as the drawings that fit the theme of The Underliving so well.

Priscilla Hernandez is not only a composer, multi-instrumentalist, singer AND poet, she is also an illustrator and writer. On her website, she tells us that even before she started making music at a young age, she was already making drawings to illustrate her own stories. 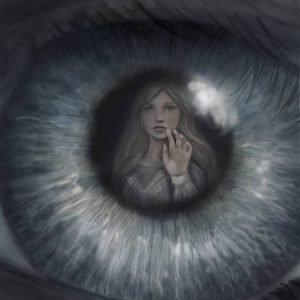 One of those stories is an unpublished graphic comic called Yidneth. Yidneth started as a horror/fantasy novel that Priscilla then illustrated to turn into a comic. – “It consists of a 74 coloured page gothic-fantasy comic graphic novel I scripted when a child and that took shape as a graphic novel done through the ’80s until ’90s.’ Priscilla tells us on her webpage. On the fact that it was never published she says the following: – “Yidneth is my trademark and the name of my company and record label but also name that I invented for my personal project, and not my artistic name (though after using it so long it’s almost like my alter-ego). When I was younger I was more focused in my works as an illustrator and then somehow music got more successful and carried away some of my projects that remained then on hold.” Parts of that artwork did make it into her CD booklets though, and also songs like Ancient Shadows or Lament, found on Priscilla’s first album Ancient Shadows – the Ghost and the Fairy, are directly inspired by pages of that unpublished Yidneth story. The Underliving is one of the worlds Priscilla created in her novel. To quote her again: -‘The Underliving is a world of reveries in the mist, lost veiled memories concealed in an alluring grey and white realm…. 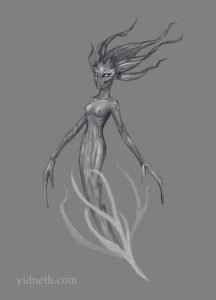 …Dormant in the corner of your eyes, always there but hidden from your sight, The underliving creatures sway over the living without our awareness. They observe us. They play with us. They inspire us…. … The album portrays the story of a chosen child that can perceive this “Otherworld” and longs to be part of it.’ So that’s the story behind The Underliving and that’s also the reason why I hope modern song downloads and Spotify will never fully replace a CD. Especially in our scene the music (almost) always has a story, a reason why it is made. And the artwork made for those albums reflects that. They are not random pictures, but an intricate part of the whole theme a musician wants to express. With us buying complete albums we keep that alive. And by diving into the artwork we also come so much closer to the essence of the music we are hearing. We understand more why it is created, what it means to the one creating it, what the artist wanted to say to us. In my eyes, The Underliving‘s artwork conclusively proves that point. 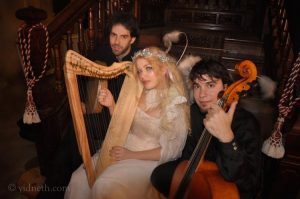 OK, it’s time to climb off my soapbox and finally get that CD in my Discman. From the first notes of In The Mist you notice the beautiful cello melody played by Biel Fiol and Svetlana Tovstukha Both part of Priscilla’s band at the time, (rightside photo) giving the ambient/new age music a more earthy feel than I knew from Ancient Shadows. More classical. The beat under it is also different, less triphop, more pagan folk. As this delicate new age ballad develops into a full song it’s an orchestra I hear, not a keyboard generated sound. That may be the biggest difference between Ancient Shadows and The Underliving. Where on Ancient Shadows Priscilla ‘only’played piano and keyboards, on The Underliving she also plays harp, mountain-, baritone-, and hammered dulcimer, psaltery, Koshi chimes, kantele, jouhikko, double ocarina, glass harp, singing bowls, flute, Irish tin- and low whistle, bansuri, and chalumeau. It’s mesmerizing only reading the list. It makes the music much richer, much fuller, quite different from the keyboard sound of Ancient Shadows. The rich earthy sound continues with the cello in the title song The Underliving. Strong strokes straight away pull you into the song and Priscilla’s opening vocals captivate you even more. With the power of the cello, I have to think of an ambient version of Amy Lee (Evanescence) straight away, but Priscilla has her own style of singing, dreamy, warm and soothing, but also sharp and eerie when needed. When I hear the electric guitar creeping in towards the end, I’m even more convinced Priscilla is the ambient/new age sister of Amy Lee, or of a young Sharon den Adel (Within Temptation), or should I say all three are the adopted daughters of that most famous fantasy pop singer of all: Kate Bush. It’s all concealed in the mists of time I guess. Talking of Kate: Feel the Thrill is the first song with the ambient pop feel that I know from Ancient Shadows. Where the previous song The Underliving is more a classical, acoustic version of a gothic rock song, Feel The Thrill takes me back to Madonna‘s Frozen. The keyboard sound underneath it takes me even further back, all the way to the ’80s and the synthpop sound of bands like Orchestral Manoeuvres In The Dark. It’s also a really catchy song, and could have been an instant hit if it had been picked up by radio stations. It sounds like a mellow, ambient version of Robert Miles music actually. The same goes for Through The Long way. If you’re into ambient fantasy music, this album is definitely for you. Good beat, beautiful orchestral arrangements, a catchy melody, and Priscilla’s beautiful vocals, you don’t need much more than this. The cool thing with Priscilla’s music is that she doesn’t believe in the boundaries of a style. She just wants to make beautiful dreamscape type music and will add whatever instrument or influence needed, as is clear from the list of instruments featured on this album. So at one moment, I hear a tune or a cello reminding me of Sophie Zaaijer and Cesair, the next moment I’m thinking Dark Crystal, the original movie soundtrack and seconds after that I’m rushing to get Jyoti Verhoeff‘s Bare EP out. For me that is the power of Priscilla’s music, it is pure and genuine, and as you probably have gathered by now, I find it extremely beautiful. The dreamy, slightly eerie In My Mind’s Eye, the spooky piano ballad Off The Lane, the Native American/Cesair-like pagan folk song Northern Lights, the piano/string ballad Morning light or the stunning ballad At the Dream’s Door, the experimental pop-art of The Aftermath, they are all equally beautiful. My personal, favourite part of the cd is not one song, but the sequence of The Wind Song and Ode To The silence following each other. Both strong pop-art songs they are just arranged masterfully together, combining the best bits of Jyoti Verhoeff, or an acoustic Within Temptation together. Somehow I constantly come up with these gothic rock/female-fronted metal comparisons although I actually don’t want to. I know it would mislead you, reader, into thinking this is a rock CD, but it most definitely is not! Although it also isn’t a sugar-coated new age/ambient/fairy record. It just happens that Priscilla’s singing style, in its lyrics and the wat she performs them, how she plays with the melody lines, reminds me of singers like Amy Lee. A thing Priscilla herself also mentioned in a note she wrote to me while we were discussing the details around these reviews. Priscilla has her own unique style. Something that hovers somewhere between new age music, ambient dance, pagan folk, and gothic fantasy. Something else also becomes very clear as you wander deeper into the music and artwork of The Underliving, this is a really, really personal CD. 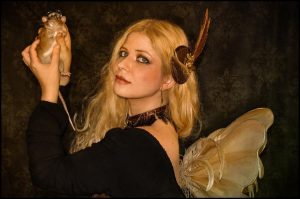 Yidneth may not be Priscilla’s alter Ego, but it surely is an integrated part of her being. Yidneth is Priscilla’s gateway into the dream world she herself has created. It is also the gateway she needed to get to terms with her childhood’s sleep paralysis and nightmare experiences. It’s those lyrics that keep pushing me towards those gothic references. They are not sweet and sugarcoated, they are deep, fairytale-like but with those dark shadows that make movies like Underworld and The Dark Crystal so beautiful. It’s also the lyrics that make the music of bands like Evanescence, Within Temptation or Leave’s Eyes so powerful. Priscilla’s music lives there, right on the edge of acoustic gothic music and ambient dance. Unique and beautiful. I’ve talked long enough, put this record in your CD player, put on your headphones and close your eyes. Start dreaming. See that small child waiting in the shadows? Don’t be afraid. Grab her hand and let her lead you into the beautiful world of The Underliving. The world of Yidneth. 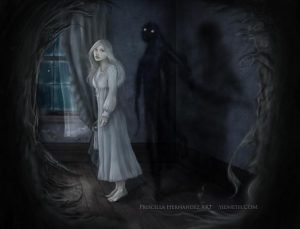