Once there was, and once there wasn’t. One thing comes to pass, and the other doesn’t. Two families fought before men walk the earth. Out the peace they then wrath, followed unlively birth. After many moons bloodshed, spears set aside. In a great hall, they met to turn the red tide. A cauldron was set in the midst of the thing. The anguish went out and the spittle went in. From saliva of all, the wisest became, destined to fall and Kvasir his name…. With these words Grima, Sowulo’s new album, starts. A rather unconventional way for a Nordic folk band, but Sowulo was never meant to be a conventional band in the first place. Starting out as a musical project founded by Faber Hornbach to celebrate the pagan holidays, it developed into a musical journey deep into our pagan heritage. (Which for me as a dutch person mean the times of the Batavi and the Frisians, part of the west- and North Germanic tribes that inhabited western and northern Europe around the Roman times). And we are doing it through Faber’s eyes, traveling with him to the days of the Northern Germanic tribes. The times were stories were told of the worlds flanking Yggdrasil. Storys of the plights of the gods and their interactions with dwarves, giants, elves, and all the other mythical creatures living in the nine worlds 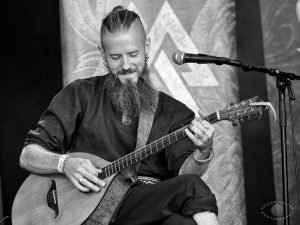 Just a year ago Faber surprised us with Mann, a personal Nordic folk album, really powerful and tribal, in which he searched for his inner warrior, lover, king and musician, in a way discovering his own person and his place in the ever-turning circle of life. Mann ended up being a very intense and beautiful pagan folk album, sung in Anglo-Saxon. An album that took me a while to fully understand, but I now count as one of the better Nordic folk albums in my collection. Fast forward a cycle of the sun and we have a new Sowulo album. Part of it already came out as a digital album on Bandcamp, and again it was a huge surprise as it consists of stories, not songs! And not just any old stories. No, Faber and storyteller Niek van Eck traveled back in time to the days of Asgard, when Odin ruled the nine worlds, and Ragnarok was just a small ripple in the future to come. Stories that ended up being written down in the Edda, the basis for all our knowledge of the Nordic myths and legends. Three of those stories made it onto Grima. Three stories based around the main theme of faith and destiny. Especially the futile struggle to escape your own destiny, be you a giant, man or god. Triumph Over Tears, the third story for example, tells about the faith of Baldr, the son of Odin and his wife Frigg. It starts with the discovery of the Gods that Baldr was destined to die, and in their futile attempt to stop this from happening, they actually became responsible for his death! A death that otherwise may not even have happened. Spātle Ǣghwās, the first single inspired by Grima is based on the ‘Saliva of all’ storytel-track Gungnirs Gap, the fourth story on Grima, is even clearer in its message. It tells of Odin who discovers that the Norns, the ones weaving and breaking the threads of life, manage to laugh at faith while doing so, totally bewildering Odin, who in the end discovers that even for him, the mightiest god there is, trying to avoid faith is futile. The opening track Saliva Of All and Beguiled By Blood Brew together form the longest story on Grima. It tells about the faith of Kvasir. The wisest of all, whose fate was to be killed by greed, and whose blood was turned into the mead of poetry, the mead that even to this day gives us the beauty of poetry, music, and stories. It is clear that Niek van Eck (left), our narrator in this world of ancient sagas did indeed ask Odin for a drop of inspiration, as did Faber because Grima is as impressive an album as Mann is in its own unique way.

From the first sentences of Saliva Of All, it is clear that Niek is a gifted story teller. He has a pleasant, deep, strong voice that fits these old Nordic stories perfectly. All told in English, his stories manage to captivate me time and time again. Even now, after listening to them for a fifth time, writing this review. He knows perfectly well when to slow the pace of his story, or when to speed it up to keep you captivated, and also when to change his tone of voice to emphasize a certain phrase or sentence. Faber in his own right complements Niek very well. He took the stories and composed music under it, creating a perfect soundtrack to support every story Niek is telling. The best compliment I can give Faber is that the music never takes the foreground. While listening you tend to forget about it although you know it is there. The drums; the nyckelharpa; the strokes of the jouhikko; the gentle touch of the lyre; and the mythical sounds of the synth play some lovely repetitive themes that fit the stories very well. They lay a beautiful carpet on which Nieks words find a perfect resting place, changing rhythm and tune to emphasize every new chapter Niek is starting in his stories, but they never take over. Only at the end of the last story, at the end of Gungnirs gap, Faber finally lets the music flow freely and lets the instruments tell their own story of fate, destiny and human nature. A perfect ending to a lovely storytelling album. Now Grima, in the form it was released on April 2020, would never have made it to the CeltCast review pages, as we are an acoustic music station. But luckily on the digipack, there are two bonus tracks, and they deserve just as much attention as the four beautiful stories I told you of above. With Spātle Ǣghwās and Fæcele, Faber took the musical themes he used in the stories and transformed them into two lovely songs, sung in old Anglo-Saxon. That might sound a bit odd for a nordic folk album at first, an old English language? Not if you know the history of it. Anglo-Saxon was the language spoken by the Germanic tribes living in the north of Germany all the way up to the top of Denmark. It was those tribes who, together with the Frisians, from 375 AD onwards made the jump to east England after the Romans left there, driving the original Celtic inhabitants of England outwards to Scotland, Wales, and Ireland, where Gaelic still lives today. So it is actually a north Germanic language The first thing you notice when listening to Spātle Ǣghwās is the truly stunning voice of Emilie Lorentzen, best known as the backing vocalist of Euzen and Heilung. She lifts the already very powerful, atmospheric folk of Sowulo into new heights, her voice effortlessly shifting from angelic hights to intensely piercing, she puts the crown on this historic folk ballad, inspired by the story of the birth of Kvasir. Fæcele is a faster song that’s perfectly in line with the music we heard on Mann. It shares the strong male vocals, the nyckelharpa, and drums from Mann, but adds a certain feminine touch to it, especially through the classical influences and atmospheric vocals halfway in the song.

While the music under the four stories is played by Faber alone, on Spātle Ǣghwās and Fæcele he is joined again by his fellow bandmate and Celtic harp player Chloe Bakker. Furthermore, we hear Rikke Linsen (Pyrolysis) on Violin and Heleen de Jonge on Cello. Faber has written yet another chapter in the story of Sowulo, a story that is as exciting as it is unexpected. I can’t wait for what the next page of their story will bring, I guess I will just have to wait till the wheel of life turns once more. But until then I will keep enjoying the ancient myths of the north, and the ancient sounds of the Northern hemisphere, clearly touched by the meade of poetry, the blood of Kvasir himself. Cliff (For those who can’t get enough of the old Nordic saga, here is one more, recorded in 2016, just before Sol was released. In this case the narator is Eugene, and it is told in Dutch, but with English subtitles. Enjoy! ) Cliff Editor: Sara Cover art:Tim Elfring Pictures: Cliff de Booy (1) Rebeca Franko Valle (2) Samantha Evans (3 and Grima video covers) Credits Ginnungagap Story video: Video production by Jasper van Gheluwe | Deer and Wolf Productions Soundtrack by Faber Horbach | Auroch Audio Productions