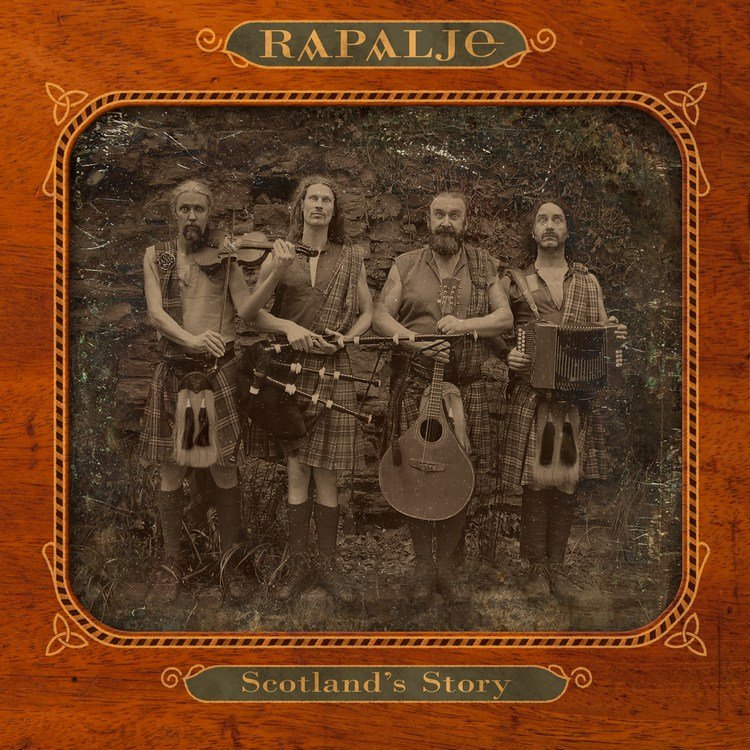 There is not much that Rapalje didn’t achieve in their long, extensive career. Their origins going as far back as 1994, they’ve become a household name at the big Dutch and German festivals, with fans as far away as Brazil and Chile. They have 12 albums under their kilt (including the early cassette album Celts In Kilts) a live DVD and even their own festival called Zomerfolk. You could easily say they are the most successful Dutch Celtic folk band. And the cool thing is that they built that name upon the continuous high quality of their music, an always open and friendly approach to their fans and a totally laid back attitude on stage. In a way they are still the street musicians that got together playing in pubs so many years ago. Their last album, Hearts, dates back to 2014 so a new album was anxiously awaited by the fans. The fact that fan favourite Flatlands already featured as a teaser on the promotional mini CD that Rapalje shared with the crowd at last year’s Castlefest only enhanced the anticipation among the fan groups on Facebook. But the wait is finally over. About a month ago Rapalje released their 13th album Scotland’s Story and yes, the album is all we have come to expect from David, William, Dieb and Maceál. Everything and a wee bit more. 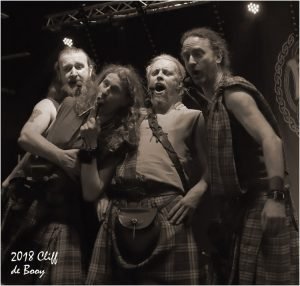 Do I really need to introduce the band? It’s hard to believe that it all started out as a symphonic rock band formed in a pub many many years ago. They didn’t play that type of music long though, after seeing a Celtic folk band in their local pub, Maceál – vocals, squeeze box, mouth organ, gitouki, bodhrán, snaredrum – and Dieb – Vocals, violin, tea chest bass, mandolin – carried on as a folk duo called Ruk and Pluk. At that same time Maceál was also active as a street musician, playing up to 11 instruments at once. On the other side of the street a certain William – vocals, gitouki, tea chest bass, bodhrán – was also making a name for himself, as a talented and charming street musician with a good voice. To ‘eliminate’ the competition Maceál introduced William to Dieb, and from that moment on there were three. William is first heard as a guest musician on the 1997 debut album Celts In Kilts, but became a permanent band member soon after. David – Highland pipes, uillean pipes, tin whistle and low whistle – joined the band several years later. Half Scottish, half Groninger he started playing the bagpipes with the Clan MacBeth pipeband where he is still an instructor. He is also an instructor with The Islanders. Rapalje discovered him during a Scottish festival, where he stood out, as they say: ‘because of his obvious talent and melodic way of playing.’ Since their humble beginnings in 1995, Rapalje have brought out one cassette album called Celtic Folk Music, 12 CD’s, one of them being a compilation containing three of the four first albums called Rakish Paddies (2000), and a live DVD. Furthermore they organise their very own festival, Zomerfolk since 2014. A festival that has become one of the firm favourites on the Celtic folk calendar. ‘THE 13TH ALBUM, SCOTLAND’S STORY’ And now there is the 13th album Scotland’s Story. Fans of Rapalje will feel right at home from the very first notes they will hear. It has all the characteristics of Rapaljes music, good voices, lovely Celtic melodies and a sound as warm and comforting as Scottish whisky. This is Rapalje as you want to hear them. Opener Long May You Run is, to my surprise, a Neil Young cover. Originally played by the Stills-Young band . I say to my surprise, because Rapalje re-arranged the song in such a way, that I didn’t recognise the Neil Young style at all. William is the star in this song, I really love his voice. It is strong yet full of emotion and has that wonderful sandpaper edge you want in a lead voice. Long May You Roam, in the Rapalje interpretation, is a lovely mid tempo folk ballad with Dieb’s violin solo flirting ever so slightly against American country. A lovely start to the album. Fans of bagpipe music are in for a treat with Standfast – The Mason’s Apron. A lovely combination of Scottish traditionals, showcasing all of David’s talents. Although the main ingredients are ‘just’ a bagpipe solo, a gitouki rhythm (the gitouki is a cross between a guitar and a bouzouki that Maceál invented) and a Bodhrán beat, Rapalje somehow managed to contain the energy of a Scottish marching band into a catchy pop song. Quite an achievement. 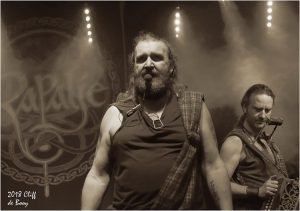 The start of the album is an accumulation of highlights. The third song is a firm favourite of mine in Rapalje’s live set and again sung by William. Skye Boat Song is the song where I think he really excels. Just listen to that voice as he starts the first lines of Skye Boat Song completely solo. Only his powerful voice, fully expressing every inch of longing for a life gone by written in the lyrics. Goosebumps all the way. Especially when Dieb on violin and David on bagpipes accompany him. The title song, Scotland’s Story, is another modern cover originally by the Proclaimers. It starts as another ballad by William but David takes over halfway through with a lovely bagpipe melody. A good mood guaranteed for everybody who loves bagpipe orientated Celtic folk. Then follows a cover I know very well. The Great Song Of Indifference by former punk singer Bob Geldof. It is this song that pulled me into folk rock when it became a hit in 1990. Actually the whole Vegetarians Of Love album is a classic in my book. The Great Song Of Indifference, in it’s original form, is a energetic, upbeat folk song, with the lyrics being cynical in a way only an Irish person can write or sing. It’s acoustic folk rock with a good punch of punk attitude. Rapalje took a totally different, much more jazzy approach to the song. They re-arranged the solos, took turns singing the lyrics and in that way made The Great Song of Indifference their own, just as they did with the other two modern covers Long May You Run and Scotland’s Story. Although I personally miss that contrast between the upbeat melody and the cynical punky attitude that gave the original its powerful message, the Rapalje version is growing on me and I’m sure the fans will fully enjoy this version. ‘THE ALBUM IS AN ACCUMULATION OF HIGHLIGHTS’ 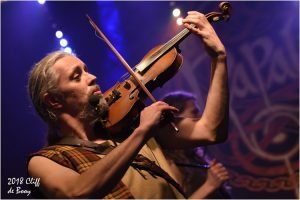 Leezy Lindsay is a mid tempo ballad with lovely violin lines from Dieb and the warm, slightly low voice of William both taking centre stage. The song is a love story from a time where it wasn’t a good thing to be a Highlander. But Leezy Lindsay, although hesitant herself, was encouraged by her loved ones to go with a Highlander Laird who made her the lady of a great castle. An interesting part of folk music is that they quite often take a tragic or gruesome story and pack it into the most cheerful of tunes. Step It Out Mary is a good example of that genre. The melody is up beat, cheerful and really invites you to sing along and clap. The lyrics tell a totally different story, a love-not-to-be with a tragic end. Dieb proved years ago with The Bog Down In The Valley-O that he is a wonderful storyteller and this song is no exception. 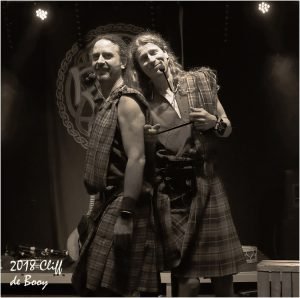 The Strayaway Child had me surprised the first time I heard it. It’s a flute solo by David on the low whistle, an instrument often used in the pagan folk scene. And indeed a big part of the song has a real pagan folk feel to it. That feel is enhanced by the low accordion chords (and is that a cello I hear next to it?) accompanying David’s slightly mystical notes. In a way those instruments take over the role that the slidgeridoo has in many pagan folk bands. A lovely, enchanting surprise. Towards the end of the song the Celtic heritage finally takes over though, the rhythm changes slightly and a nice violin melody turns this pagan folk ballad into a Celtic folk duet for low flute and violin. One of my favourite songs on Scotland’s Story. Dieb in his role as singing storyteller takes the lead again in Tippin’ It Up To Nancy. In its essence it’s an a cappella song, accompanied by a single bodhrán, telling another sinister story of betrayal and adultery in the most cheerful of tunes. With just the right amount of trickery and treason to keep us entertained in the verses, the chorus is fun and cheerful, a perfect sing along song during concerts. ‘FLATLANDS, ALREADY A FIRM FAVOURITE’ Flatlands is already a firm favourite among the fans during the live shows and now the most powerful song on this mostly mid tempo album. Written by William in a way it tells the story of Rapalje. But the best part is David playing the chorus on Highlander pipes. As a young lad I went to a taptoe as we call it in Holland, with Dutch marching bands and one of them was a Scottish marching band. I still remember to this day the first time I heard Scotland The Brave played by those bagpipes and it still brings shivers to my spine. I even watch the Edingburgh tattoo every year to hear the marching bands play it as they leave the castle. And guess what, thát is the tune Rapalje put in the chorus. During live shows the best part always is when David walks of the podium straight into the crowd, creating a gigantic polonaise behind him as he criss crosses through the audience. Maceál managed to capture a big part of that energy in the album version of this song, making it a worthy conclusion to this lovely CD. With Scotland’s Story Rapalje added yet another fine CD to their already impressive discography. As always it is full of quality Celtic folk. It’s an album filled with warm comforting music, played in that typical, slightly laid back, Rapalje style. A joy to listen to and I can only hope that it won’t take another 4 years before they record the next album cause this CD already gave me an appetite for more. Oh and I have one other request. That band portrait in the middle of the sleeve art! The one with the eyes! Can we get that as a poster?? I need to have that as my new wallpaper! It’s hilarious!!!! – Cliff editor: Diane Deroubaix Sleeve art: Dieb Photo’s: Cliff de Booy