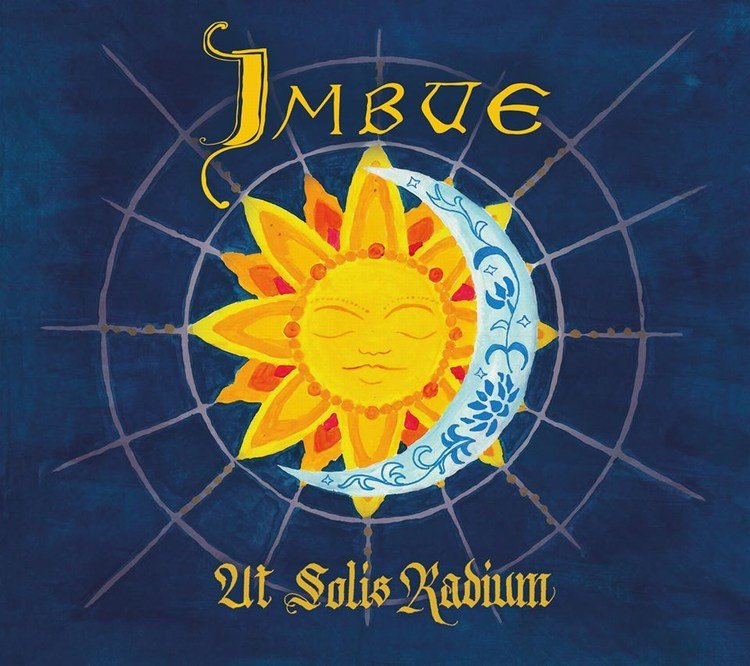 According to their website, we can find Imbue’s music somewhere on the edge of the old medieval times and the new Renaissance period. I can add they also stand somewhere between the Classical world and modern balfolk. In 2017 Imbue released their debut album In Quatuor Tempora, a collection of 12 [quote Imbue]: ‘old and nigh forgotten (folk)songs’, and now, September 2019, their new album Ut Solis Radium was released in the place where it all began. the Gasthuiskapel -guesthouse chapel- in Zaltbommel, the exact spot In Quator Tempora was recorded. Luckily nothing changed in the Imbue world. The new album is again a beautiful collection of medieval and renaissance pieces, skillfully recorded by these 5 talented musicians.

Let’s introduce all the Imbue members to you. First off is Robin Lammertink on lead vocals. She is a classically trained mezzo-soprano who is not only interested in polyphony -singing with multiple people who each have their own independent melody, something she herself explains more about at the end of this review– but also in history, especially the history of Tudor England (1485 – 1603). During her current studies at the Conservatorium of Utrecht, she started composing and arranging herself, a skill she gladly uses in the music of Imbue. 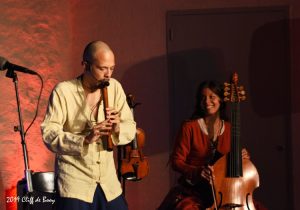 Robin shares her love for old English times and creating music with Meidi Goh, who has a specific love for the music of Elizabethan England. The period in the Tudor times when Elisabeth 1st ruled (1558 – 1603) and Englands most famous son, Shakespeare, lived. Meidi is not classicly trained as such. She got a deep love the Viola da Gamba -the bass viol- and Renaissance music through her mother, who played in a recorder quartet. She started taking lessons with a Baroque violinist and then turned towards the tenor viol and singing. Her love for folk started when she joined the Dutch band AmmA, and she loved the freedom it gave her to improvise and create her own music, a freedom that accumulated in her first solo CD Heartstrings that came out earlier this year. Remy Schreuder (picture left) is the third vocalist of the band and he is also a virtuoso on recorder and cornett – an early wind instrument. popular in Renaissance and Baroque times. Remy is classicly trained from a young age, and – just as Robin and Meidi- stepped away from the sheet music at a certain point to enroll in a musical training course, which taught him to play different styles of contemporary music: pop, jazz, blues, and even metal. It also taught him the skills of solo improvisation. At the moment he’s studying at the Historical Performance Department of the Conservatorium Utrech, all skills he puts to good use in Imbue. Laurens Kah is Imbue’s Irish bouzouki player. He has had classical piano lessons from an early age and then took a detour through heavy metal. But the love for, as he describes it, “peaceful piano music”, which he kept through that time, brought him to folk music, where he now not only shares the stage with Imbue, but also with the folk band Pyrolysis as an accordionist. 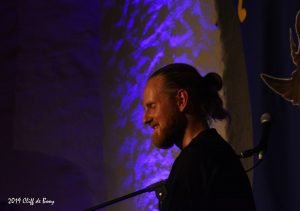 Imbue’s last band member we also know from Pyrolysis: He is of course percussionist and vocalist Tim Elfring. Tim is not classically trained, but equally talented and in his own right is just as important for Imbue’s sound as the other bandmembers. Medieval music sounds totally different from modern music, so Tim helps arrange the old sheet music into a more modern form. How he does that Robin explains herself at the end of this review. From the introduction of the different band members, it’s already clear what you can expect from Imbue. Ut Solis Radium is filled with 12 beautiful medieval/Renaissance pieces with a good splash of balfolk to cheer it all up. And, I can already reveal, these songs are like honey to your ears. It starts with the very first notes of Worldes Bliss, two beautiful female voices that instantly grab you. Did I say two female? I make that mistake e-v-e-r-y time I hear the beginning of this 12th century a capella English song. Because it is actually Robin and Remy singing here, so a female and male voice, but Remy has such an amazing range. He easily matches Robin’s voice, not only in height but also in the purity of tone and beauty. Really amazing. I think the official term for it is a countertenor. I know the unofficial term for it is a jawdropping “AMAZING!” To make things even more impressive in Hanacpachap Cussicuinin – a 17th century Peruvian hymn in Quechua – Remy takes on the bass ánd tenor voice. A simply insane range. But let’s not forget the third beautiful voice that Imbue has, Meidi Goh, also joins in. The first two songs are all about Imbue’s voices. A simple drum, flute, viola da gamba accompanies them, all done in such a controlled delicate way, yet with feeling and intent. When so much musical talent comes together in this way the result is just stunning. A compliment to Thomas Cochrane recording and mixing) and Ferry Verhoeve (mastering) from the Dutch E-sound studio, who together managed to capture every single note, but also every single moment of controlled silence perfectly. O Madame is a lovely cheerful 16th century song with Remy playing lovely ‘ornaments to the main melody’ on the recorder (a quote from a conversation I had with Robin Lammertink about the new CD that describes Remy’s style of playing perfectly and she added that it is sort of his specialty). With the next song, J’ai Vu Le Loup, we have another French song, a classic among medieval and folk bands. Always fun to hear and Imbue’s version is no exception. 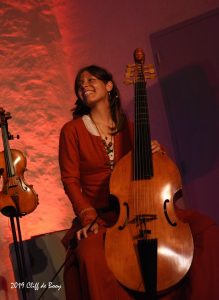 For now, I’ll keep focussing on the cheerful songs, Bobbing Joe is another one that puts a huge smile on my face, its a traditional song with words put to it by Meidi Goh who also took the lead on it, together with the fourth beautiful voice Imbue can put forward, that of Tim Elfring. This is also the main difference between the first album In Quator Tempora and this one, Imbue makes more use of all their vocal talents, making the album more varied. I have to say I love the cheerful, dancing feel of Bobbing Joe. It is so Meidi Goh. You can hear her sparkling joyful energy in every note she, Tim, Laurens and Remy play. I loved it on her solo album Heartstrings and I love it here too. It also is the strength of Imbue. That match of classical talent and folk talent together, giving them a unique sound within both the folk- and the classical world On Stella Splendens Robin shines. How she has grown as a singer since In quatuor Tempora. Mind you what she did on the first album was already impressive, but a couple of years of conservatorium brought out the best of her obvious vocal talent. It’s on moments like this I am grateful my mom used to play classical music a lot so that I learned to appreciate this side of the musical spectrum too. I would have missed so much beautiful music if she hadn’t. Imbue’s wonderful interpretation of this 14th century Latin song would be one. Hemels Dauwe is a fun song, again different (compliments on the varied song choice Imbue) and in Dutch. It comes from Het Antwerps liedboek (The Antwerp songbook) and has balfolk written all over it. Can medieval music be cool? Well, the answer comes with the stunning last song om Ut Solis Radium. A resounding yes!! As I listen to the beautiful high notes that Robin is hitting in Mirie It Is While Summer Ilast, I can only come to one conclusion. Imbue’s music isn’t building a bridge between two worlds, no it is bringing four worlds together, that of medieval music, the Renaissance, classical chamber music and balfolk. And in a fresh contemporary way at that. A must-have for all who love historical classical balfolk music. – Cliff editor: Sara Weeda Sleeve art: Robin Lammertink, Meidi Goh photo’s: Cliff de Booy PS: As promised Robin Lammertink took some time to explain a bit about the different ways of singing harmonies. 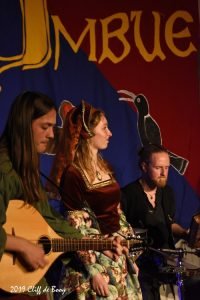 Robin (middle): ‘The most common vocal style is the monody. This is a solistic vocal melody accompanied by an instrument who plays chords. When you sing with more people you could all sing the same melody; which would be singing in unison. But you could also sing in vocal harmony, which is when all the voices sing in the same rhythm, but different notes from the chord. Or, when every voice has an independent melody, ingeniously intertwining to become one composition, we speak of polyphony. A good example of singing in vocal harmony is ‘O Madame’ was the second vocals of Meidi are simultaneous with the lead vocals, but on a different pitch, creating a harmony. A polyphonic example from our album is ‘Bobbing Joe’, where Tim’s melody has a different rhythm from Meidi’s melody; he sings long notes, while Meidi sings shorter notes. Btw it’s not only polyphonic, but it’s also polytextual; singing two different texts at the same time. This was actually quite common in the Middle Ages. Speaking of which; ‘A Round of three Country Dances in One’ (which did not end up on our album, but is on our Youtube) is polyphony ánd polytextuality at it’s best! 😉 Another interesting thing about medieval music is that before the 13th century the barline was not invented yet. Meaning there was no ‘pulse’ the way we feel the beat in modern music. Nowadays most music is divided in a 4/4 measure, with four beats in one bar, or a 3/4 measure with 3 beats in one bar. The ‘one’ is usually more accentuated (or ‘heavy’). This is a feeling we as modern music consumers all recognize. The ‘one’ is also very important for dancers. Before this division in equal chunks of 4 or 3, there would just be a musical sentence with a random amount of beats, simply following the text. So this is where Tim comes in. He is there to find the “one’ in those sentences and create a suggestion of logic. Like for example in Stella Splendens. The first and the fifth bar of the couplet have 5 beats, while the rest have the ‘normal’ 4 beats. This feels strange to our modern ears, so it’s is Tim’s job to camouflage it gently without losing the old charm.”