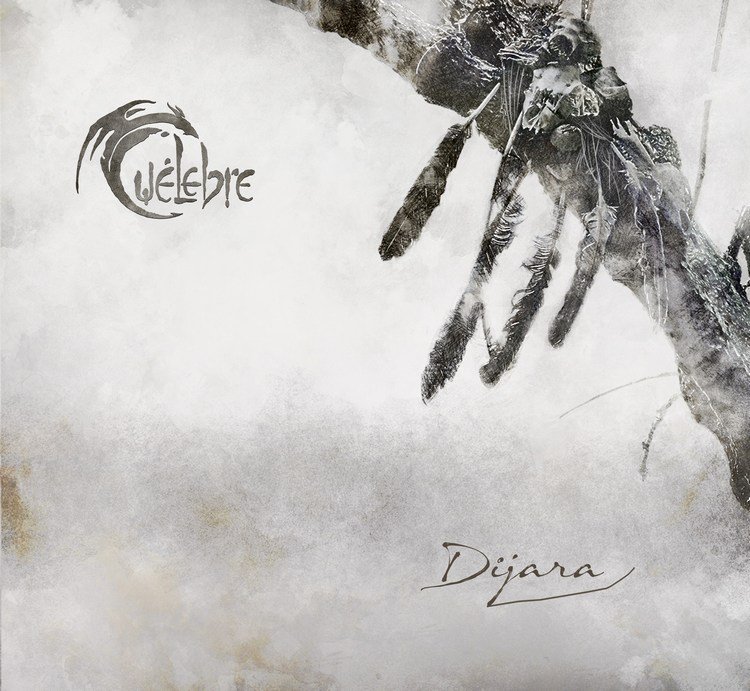 It was a Sunday morning, the 7th of August 2016, about 10:00 in the morning. It was slightly drizzly and we – my girlfriend, the SeeD crew, me, and a whole bunch of other Castlefest die-hards – were sitting on the hill overlooking the folk stage, listening to the gentle sounds of The Moon and the Nightspirit, while watching the Sunday crowd slowly filling up the grounds again. The perfect way to start a Castlefest morning. Next up was a Spanish band that I, up to that point, didn’t know. But that was about to change! Fast! Within two songs that band had the whole crowd awake and dancing and me going for my camera. (You can see one of the pictures I took then just below this paragraph) That band was Cuélebre and their show worked better for waking me up than a liter of strong espresso would ever do! Obviously I bought their CD Oinos straight after the show and it is still being played monthly in the De Booy household. Especially the song Fodder for the Raven I consider a firm pagan folk classic.

What makes Cuélebre and that first album Oinos, published in 2014, so unique is their 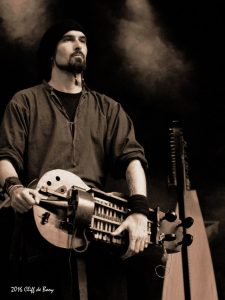 dark tribal sound; The deep roar of the didge combined with fast energetic drums, the dominant sound of bandleader Yhandros Huergo’s hurdy-gurdy combined with the haunting flute melodies flowing through the music like morning fog over the roughed scorched Spanish mountains. Oinos makes me think of the pictures I’ve seen of Extremadura; the barren black peaks, the vultures circling the sky, a bobcat sliding through the undergrowth. Cuélebre makes the perfect soundtrack for that landscape: dark, tribal, and passionate. The whispered, half-sung, half-spoken vocals of Marta Gálves made it all complete, making Oinos a unique sound in the European pagan folk scene. In August 2017 Cuélebre released their second album Anaman, with only bandleader Yhandros remaining from the line-up that recorded Oinos. It didn’t change Cuélebre’s sound too much though. The biggest change were the vocals, the then ‘new’ singer Rose Avalon (Rose Avalon, Ritual Duir) has a background in jazz and melodic metal. Her voice made Cuélebre’s music more dynamic, more powerful, but slightly less ‘haunted’. The whole album has a more positive feel over it, without losing that strong tribal connection to the old Iberian tribes and the roughed Spanish landscape. Now, finally, the long-awaited third CD, Dijara arrived and it is a stunner! Like I mentioned before, there have been some line-up changes in the last couple of years, mainly in the vocal part, and again I was really interested in how it would affect Cuélebre ‘s sound. 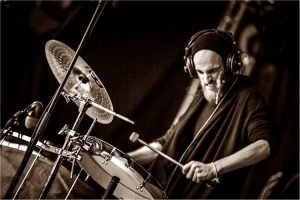 Well, to answer that straight away: Dijara is the perfect mix of Oinos and Anaman, taking the best elements of both albums. What remained is the strong tribal feel, the fast deep drums, and the haunting shards of flute cutting, weaving its way through the deep didge sound and the everpresent hurdy-gurdy. The vocals on the other hand returned to the more chanting, shamanic style we know of Oinos, something I personally think suites Cuélebre’s music really well. I feel like Cuélebre’s sound is slightly ‘mean’ again, that rough edge is back in the sound. And I personally love it. Leiko Kei Tratt, Derwa, and Karuo are such strong vibrant dancing tunes, they are bursting with power and energy. Deva and Tanit, on the other hand, are slightly slower songs with that familiar haunting tribal sound, reminiscent of Fodder for the Raven, my favourite song of Cuélebre’s first record. So is Dijara an Oinos part two? No, not at all. Cuélebre took some huge steps forward since then. First off there are those vocals. They are mostly recorded double and although Judith doesn’t use the exuberant vocal capacity of Rose Avalon, she does put in a lot more melody than Marta did. Not that one is better than the other, they just use different styles and I happen to like them all. A lot of the time Judith’s vocals remind me of Faun, especially on songs like Keinoman, Deva, and Leiko Kei Tratt. And I have to say, it fits the music of Cuélebre perfectly. Another thing that progressed a lot is the overall sound of the album. While staying true to the original feel of Cuélebre, Yhandros put a lot of effort into the end mix, making the album sound way richer, more dynamic, and far more powerful then Oinos or even Anaman. The best example is the song Macha, starting out as a mid-tempo song reminiscent of Fodder for the Raven, it quickly builds up to a full-on energetic dance tune, with the same powerful build up as Cesair’s Canzo. No mean feat. 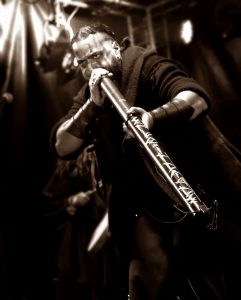 Another example is Derwa, a strong pagan folk song, acoustic, but with a drum/didge rhythm that would work perfectly as the basis of a ’90’s Eurodance song. Really? Yes really! And the best thing about it? It works! Victor has a didge style, quite similar to that of Daphyd Sens, which works perfectly in such a ‘modern’ interpretation of a tribal pagan folk beat. Another example of the strong mixing skills on Dijara is the ‘choir’, kicking in halfway through Leiko Kei Tratt, making this vibrant tribal dance tune sound even more impressive. because of that I consider Leiko Kei Tratt, together with Derwa, one of the strongest tracks on this impressive CD. Adding everything up I can conclude that Dijara is Cuélebre’s strongest album ’til now. Strong, powerful dynamic, and tribal. If I am looking for comparisons, then the sound of Cuélebre nowadays makes me sometimes think of Omnia, especially their famous rhythm section: Daphyd Sens and Rob van Barschot. Sometimes small segments of the music remind of Waldkauz (just listen to the flute solo leading us into Karuo for instance), in the first songs especially the vocals lead me towards the older material of Faun, and even Brisinga’s impressive vocalists pop up one time as a reference (Listen to the spoken vocals on Macha, they are just as strong as Brisinga’s vocals on Sinä Ja Minä), but these are all references. Add everything up and the sound is 100% recognizably Cuélebre. With Dijara the Spanish band settles themselves firmly at the top of the pagan folk scene. Congratulations Cuélebre, you did all did a hell of a job on this one! – Cliff -editor: Sara Weeda -picture’s: 1 Cliff de Booy taken at Castlefest 2016 2,3 courtesy of Cuélebre