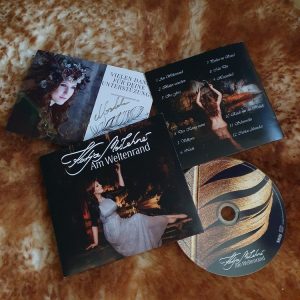 A couple of months ago, our CeltCast photographer André asked me: “Have you heard Am Weltenrand? The new single of Katja Moslehner?” That’s how this story started! And today… is the release date of the full album! Because of that, we will play the second single So Frei on our radio station tonight. Personally, I love the sounds of the voila, violin, hammered dulcimer, guda drum, hurdy-gurdy, uilleann pipes, cello and harp. The perfect mix for this mythic pagan folk album. Katja was inspired by Taliesin (the famous Celtic bard), Swans, Valkyren, and annual festivals. The content of the songs goes back to ancient times, where bards spoke of the beings of the trees and Hildegard von Bingen sang of the life force. Do you love Loreena McKennitt and German folk music, then you will love this one for certain! The booklet contains all the lyrics and is decorated with stunning photos of Heiko Roith and Anke Seidel. My favourite songs are: So Frei, Mit Dir and Hexenlied. 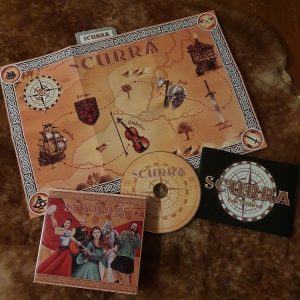 Recently, we received the beautiful debut album of the French band Scurra! It’s funny how new music is reaching us because of “social media”. Last month, our Cliff wrote a review about the debut album of Le Garçon de l’Automne. The man behind that album connected Scurra with us. So… thank you Quentin! Scurra, which means beautiful spirit in Latin, is a troupe of five minstrels who perform festive music of medieval inspiration. They are using instruments like the violin, flute, guitar, bodhràn, tambourine, and drums. The album contains eleven songs. Except for the intro, we are going to play all of their songs. This album has an amazing booklet, as you can see in the photo! It’s a beauty for medieval folk collectors. The lyrics are in the French language and you can find them in the booklet too. My favourite songs are: La mort des Hommes (the death of men) and La Geste de Fergus (Fergus’s gesture). I hope you’ll enjoy these songs as much as I do. It would be fantastic to see them perform those live at one of the festivals we hope to return to!

The Moon and the Nightspirit – Aether (2020) Review 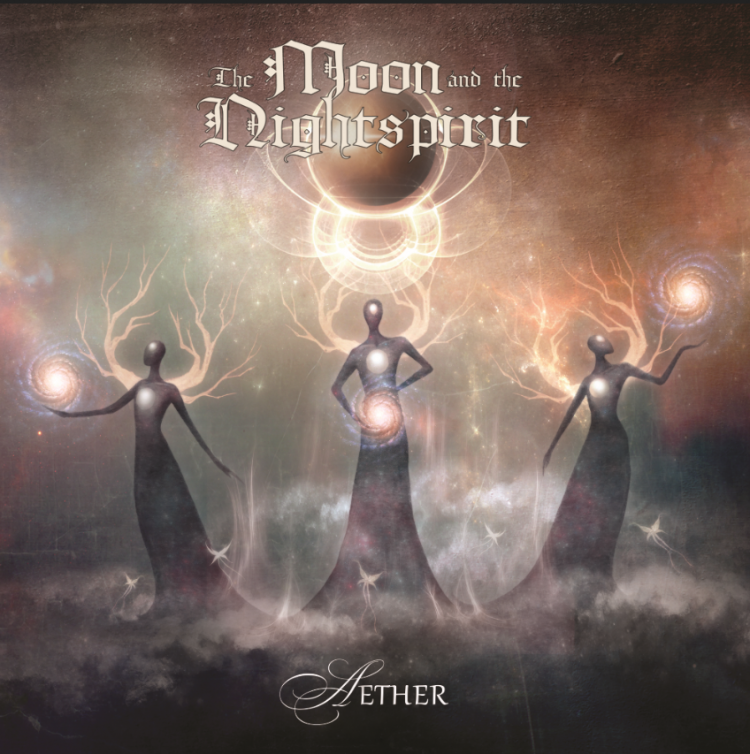 For almost two decades, Ágnes Tóth and Mihály Szabó, also known as The Moon and the Nightspirit have been blessing us with their unique blend of world music and medieval soundscapes. Music both timeless and ancient; sounds both dreamy and spooky; melodies both tender and dark; vocals both soothing and eerie; that is the musical world The Moon and the Nightspirit has created. A world that can be found in the twilight zone of Eastern European folk. Six albums long The Moon and the Nightspirit have enchanted us with their unique, acoustic take on pagan folk music, and I have loved every single record. In the summer of this year, the duo released their seventh album Aether, and during the release, Ágnes and Mihály already told the world this album would be different. ‘It was time for us to re-adjust our approach. You could call the new album Aether a milestone in the history of the band, with a surprising stylistic recalibration during songwriting – for whereas so far, singer Ágnes’ voice has been front and center, the new songs now perfectly balance the female and male sides of the Moon and the Nightspirits musical entity.’ And with that new approach, Ágnes and Mihály wrote a musical masterpiece as far as I am concerned. There is so much to tell about Aether that I’m afraid I might turn this review into a novel. 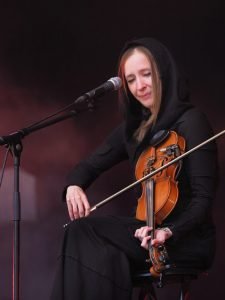 The title song Aether still sounds like The Moon and the Nightspirit as we know it from their previous records. The lovely soundscape to start it off; the subtle guitar notes; the rich and ancient sound of the dulcimer; the typical vocals of Ágnes (combining the innocence of a child with the ancient wisdom of a forest elf in her voice), the haunted violin chords, it is all so typical, all so beautiful, all so unmistakably The Moon and the Nightspirit. Within minutes I’m drawn into the song, drawn into the CD actually. The captivating power of The Moon and the Nightspirits’music is all because of the writing skills of Ágnes and Mihály, the ingenious way these talented musicians build-up their songs. It is never rushed, never forced. It feels like the music is growing organically; like it is born from within itself, these notes were always there in the mists of time, waiting to be found by those who dared to listen; and now it is found. Now it is recorded, and all I want to do is close my eyes, listen, feel, absorb it all and let go, let myself get swept away by it all. Gliding in the essence of Aether. This is just the first song and I already know this is one of the best albums I’ve heard this year! It is on the second song Kaputlan Kapukon Át, that we hear The Moon and the Nightspirits’ male side for the first time. And well, I LOVE it. Truly love it. Ágnes and Mihály have added an electronic feel to their music that is very similar to the sound Guido Bergman added to Shireen. Placing the music of The Moon and the Nightspirit slap-bang in the middle of three of my all-time favourite bands: Shireen, The Moon and the Nightspirit themselves, and the gothic/dream-pop duo Cranes. It is all so beautiful I find it hard to describe. Where do I start? It is that power of the low keyboard sound – sounding like an electrified version of a mouth harp/slidgeridoo combination – driving and driving the song; it’s those fragile, eerie vocals of Ágnes, tender, breakable and oooooh so enticing; it is the flow of the music, coming and going, like waves of gothic power building up and crashing into the acoustic medieval coral-like intermezzos in between. For those who love gothic medieval rock, this is a masterpiece. A true masterpiece. The only downside is that the song slowly fades out waaaay before I want it to end. Even tho it clocks in at 6:37 it feels like an instant. This is a song I want to last forever and ever, even longer if in any way possible. Luckily it is not the end of the album….Nooo we still have 5 more gems to come. Égi Messzeségek is next. Again there is that electric drone, that sampled mouth harp drawing me deep, deep into the mystical world of The Moon and the Nightspirit. Take the sound of Shireen; the sound of Dead Can Dance on Aion; the feel of the Cranes dark masterpieces Adoration or Thursday of their debut album Wings of Joy; add Faber Horbach’s (Sowulo) spoken scream vocals on Mann; add a Sophie ‘Shireen’ Zaaijer-like violin solo and you have the new sound of The Moon and the Nightspirit on Égi Messzeségek. Now honestly, what is not to love about that? Do I need to go on? Do I need to mention A Szárny; the pure gothic rock drum sound in it; the layer upon layer of dark musical silk making this music so strong, sooo powerful, sooooo beautiful. The clever thing is that: with every next song on Aether, the band adds a new element to it. You are guided into their new sound. Guided from the old feminine, medieval folk music of earlier records into these new masculine soundscapes. Clever; so clever. 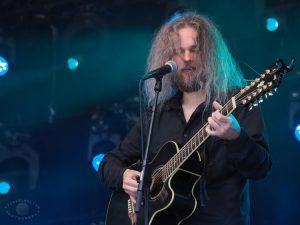 Logos starts gently again; reminiscent of Priscilla Hernandez‘s Ancient Shadows album. It gives us a moment to breathe after the intense journey we just had. It is also proof that The Moon and The Nightspirit didn’t lose their soft side. No, they just added to it. Boy did they add to it! Don’t sit and wonder too long cause A Mindenség Hívása is coming, and the drum fills are ready to grab you, take you down in a bliss of musical adoration again. My conclusion can be short but sweet. This is the best album I heard in 2020. And yes I am biased, as I have been a fan of gothic music ever since its origins at the end of the ’70s. Hearing Aether for the first time truly had the same effect on me as hearing the Sisters of Mercy for the very first time. Or a musically better comparison Siouxsie and the Banshees. Two bands I adore. Just as their music 40 odd years ago, Aether just blew me away from the very first note! The cool thing is The Moon and the Nightspirit added their own uniqueness to the gothic style. Yes, it has this dark power of the early goth bands, but just as Shireen, they added sooo many more layers to it. This music oozes richness, it oozes velvety dark chocolate out of every note played; velvety-dark and bittersweet; beautifully soft; intensely strong. Aether opens the door to the dark elf lands existing in the twilight of our imagination. This is NOT a normal album; produced, composed, written, and arranged, no no no no! This is a living, breathing musical entity, lying dormant in the Aether of time, sleeping amongst the night spirits, waiting to finally appear…. and I truly, truly love it! – Cliff Editor: Sara Cover art: Ágnes Tóth pictures: Spiegelwelten photography