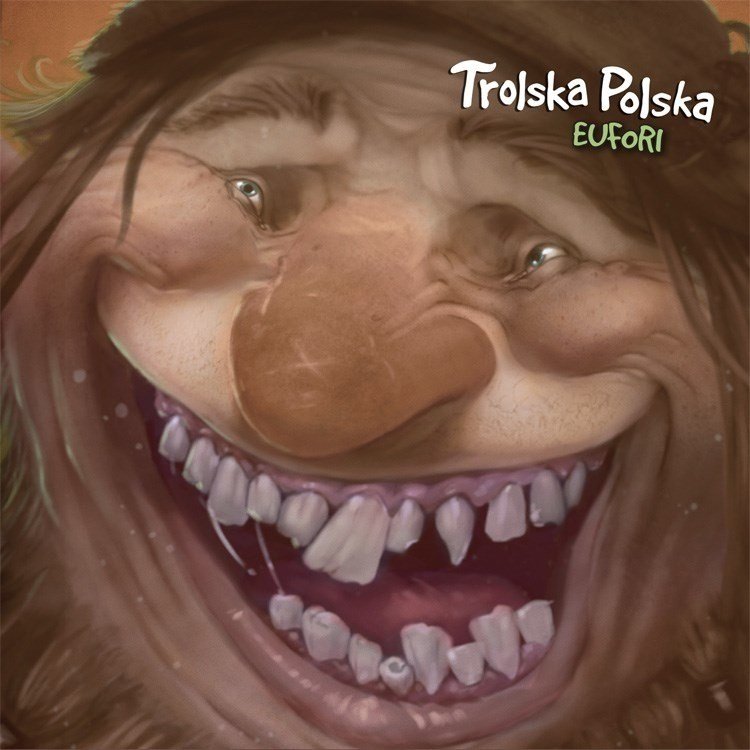 Being a CeltCast reviewer has made me discover a lot of beautiful records over the years and a selected few became even more than that, they became an addiction. They are CD’s I need to play on a regular basis, just as much as I need my daily cups of coffee! Albums like Matriarch by Shireen, Mythos by Waldkauz and Portal to Elfland by SeeD keep me energized and sane. They help me wander into my happy place, away from the madness of everyday life, the place where I can let everything go and just be me. I can tell you now that Eufori, the newest record of Trolska Polska, made it into that selected few. This album is pure genius. A troll-folk concept album that just works on every single level. From the artwork till the very last note. It’s funny, captivating and addictive. My personal album of the year 2020! 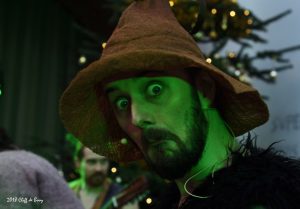 The fun starts right away with the opening song Tøbrud (spring thaw). The beginning is really gentle, tiny drops of sound are faded in, setting the mood. An enchanting flute melody appears, its sound takes you by the hand and leads you into a spring morning. This is going to be the first nice spring morning after a harsh, cold, Nordic winter. The low sun is casting friendly shadows over the frozen meadows. The gentle sound of dripping water is all around you. In front of you are two figures, dancing, waltzing and swirling. Easily evading every drop of melting snow that is falling down from the trees above. As if the old oaks are carefully pulling back their branches, making sure they do not disturb the graceful couple down on the grass….. Oh, how easy it is to drift away in your own fantasy world when you listen to this album. It is all the small little details that Trolska Polska have hidden in their songs. They have done it so cleverly, so subtle. You can really hear the drops of water fall down when you listen to the music. You can hear the melting water rush down the brooks and creeks of the ancient woods. If you close your eyes you can hear the day start. You can feel the sun heralding the start of spring. The start of big things to come. It is all there, captured in music. In my eyes, Eufori is the folk version of Sergei Prokofiev’s Peter and the wolf. A bald statement to make, I know, but trust me, it is one hundred percent true. Where Moss was a charming balfolk album and Untold Tails a lovely mix between balfolk and troll-folk music, this album is a huge leap forward. Trolska Polska not only wrote beautiful music for Eufori, but they also created a whole world around it. A whole story they play out in eleven delightful songs. Eufori is the story about one of the most important days in the troll calendar: The big spring ball! When you dive into the booklet you’ll find that every song represents a chapter of this story, beautifully illustrated by Kent Overby Stück.

As the story and music were created alongside each other they enhance one another in a beautiful way. The music becomes so much stronger when you read the tales, and the tales get much funnier when you listen to the songs. I would totally ruin the fun of listening to Eufori for the first time if I tell all about the storylines here, so instead I’m just going to tease you a bit with some hints, just to whet your appetite. I am only going to mention the mischievous troll kids, and how they manage to get the steam blowing out of the conductor’s ears… and the smoke coming from his tail while they’re at it. I’m only briefly going to point out the ‘breathtaking’ appearance of Slattenlangpat and her infamous booby-woogie. And I’m going to let you wonder why ‘the wandering giant’ leaves the party with a castle window pressed into his right eye. I can assure you, if it ever was worthwhile to buy an actual CD instead of just streaming the music, then this album is it. You really are going to miss out, if you only have the music files without the story. Tumult, the first single to be released from Eufori This brings me to the main subject of every review, the music. What can I say? I LOVE this album! From the very first note till the very last chord. This is instrumental folk music at its very, very best. The melodies are catchy and fun, the solo’s mesmerizing and the whole concept is so believable. Where on earlier albums I personally missed a bit of true troll feeling sometimes, Eufori just oozes troll-folk. Every note has something otherworldly, something mischievous about it. Where the melodies on Moss were lead by the higher notes of the flute and violin, Eufori has much more room for the lower string instruments: the cello, the double bass, the hurdy-gurdy, and the bagpipe. And that lower sound is so important to get the feeling of true trolls, gnomes, and other otherworldly creatures across. I can’t help but believe that I have wandered deep into the dark Scandinavian forest, carefully peeking in, watching the trolls have their fun, while I’m trying not to get caught. (You wouldn’t want to get a wedgie from old Slattenlangpat now, would you?) 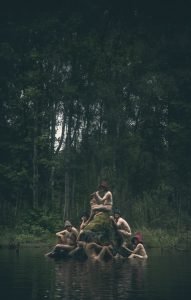 Although the whole album is a highlight, I do have some personal favourites, and the song Slattenlangpat is one of them. It’s a schottisch with a really cool, jazzy, double-bass riff as the backbone of the song. That riff alone is enough to get a huge smile on my face, but the whole build-up is great too. The catchy string melody the song has, the funny vocals that get a whole new meaning when you read the story behind it, the bagpipe solo, the pop-like string parts making this an instant hit… Oh, I could go on and on about this song alone. Vigtigpråsen is the second song I want to pick up on. Again a schottish, again with this really laid back feel to it, again built up so well. The solo’s, the catchy troll-whistle, the cool viola solo, it’s so different to the balfolk music I normally hear, so unique, and yet so cool. Not all the songs are laidback though. Halvlang Hopsa proves that straight away. It is fast, lightning-fast, and sooo much fun. Especially if you read the story behind it. Definitely one of my favourites. Keen eyes will have spotted the first Scandinavian balfolk references in between the lines. And they would be right, although Eufori is clearly a concept album, the band did not forget about their balfolk roots. Better yet Scandinavian balfolk is stil a big part of their sound. Polkas, waltzes, a hopsa, a halling, a gangar, even a menuet, all the cool Scandinavian dances are all there. Sometimes furiously fast like in Halvlang Hopsa, sometimes jazzy and cool like in Slattenlangpat, and sometimes just really beautiful as in Måneskinsmenuet. Eufori is as much a dance album as it is a pleasure to listen to. For those not too familiar with the Scandinavian dances, no need to worry. Our in house balfolk team have spotted a few an dros, some scottish, and two gavotte de l’avens besides the familiar waltzes polkas and polskas i already mentioned. So plenty to dance to. Eufori truly ticks every box possible. Eufori, the title track, and second single to be taken off the new album There are two more songs I want to mention before I wrap this review up. These are my two absolute favourite songs on Eufori. Both with a wonderful build-up, lovely melodies, and stunning solos. First of which is Hylkerne. I love everything about that song. The deep mouth harp, almost like a didgeridoo, laying down an awesome beat together with the double bass. (Or should I call it a power chord, as the song has the feel of an acoustic hardrock power-ballad that wouldn’t look out of place on a Dio album.) That beat is sooo impressive. Do you know the intro of Ayreon’s song Loser? Well, this has the same impact. Those ‘power riffs’ in the intro of Hylkerne are amazing! Acoustic, but exploding in your ears anyway. Combine that with the awesome power of the percussion and you get a sound, as if a whole platoon of mammoths is marching in on their way to a place deep, deep in the Northern woods. A place where you and I don’t want to be seen. This song is something else. I don’t know if I should dance or bang my hair around, so I end up doing both! I cannot wait to see and especially FEEL this being played live. EPIC! Truly epic!! Den Vandrende Kæmpe is the last song on Eufori, and the last song I’m going to mention. It is a song of amazing beauty. It is another power ballad. It is also the absolute best song on this truly stunning CD, I’m just overwhelmed by it all. Drawn into every single note! Into every single bar! It just goes on and on. Highlight after highlight! 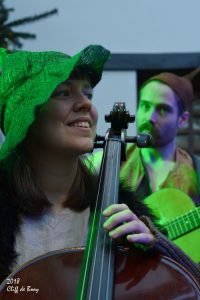 This is the moment all my editors dread, because I’m going to become lyrical, (which means I write waaaaay to much, and they have to edit that 😉 ). One by one everybody gets their moment to shine on this brilliant final song: First the percussion, strong and powerful! Followed by the cello, first improvised, then leading us in one last catchy melody. We have the double bass joining in, strong and deep, ‘singing’ its last mesmerizing duet with the cello, their duet echoing through the northern woods, flowing over the fast horizon. Beautiful! And then, THEN comes the true icing on the cake! The flute solos! As if Iain Mars of the Sidh joins in for one last moment of pure bliss. I have tears welling in my eyes as I am listening to this grande finale. This song moves me so deep in my core, so deep in my soul. This song is e-v-e-r-y-thing I adore about music! Truly Epic! So there you have it, Eurori put in words. Quite a lot of words actually. This review became quite a story although I only scratched the surface of it all. There is so much more to tell, both about Trolska Polska, and about Eufori. So I inserted one more video below, where Martin Seeberg himself tells the story of the band and the album. And with that I want to end, hoping this will not be the final chapter in the Trolska Polska tale. No, I’m hoping for many more chapters to come. And I’m hoping the very first of those chapters will be a performance on Winter Castlefest, in the great hall, with the band playing the whole album in one go, and Mia Guldhammer (Virelai) narrating it, reading out all the stories of the booklet in between the songs, making it all come to life. Of course, there should be enough room for the balfolk dancers on either side of the podium, so they can become part of the performance too. Now THAT would be a magical moment to experience. A worthy way to celebrate this magical album. Let’s hope that dream comes true one day. – Cliff Editor: – Anna Schürmann Balfolk editors: – Berit van der Jagt – Erik Leguijt Cover art: – Kent Overby Stück Pictures: – Emma Engstrom (2) – Cliff de Booy (1, 3)