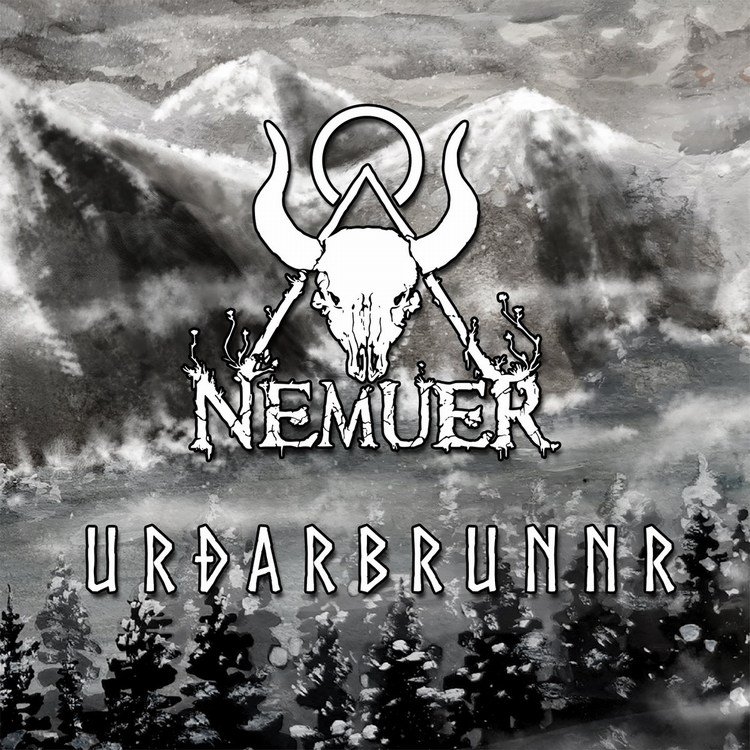 March 11th, 2017. On the stage of the Gothic & Fantasy Fair in Rijswijk -now known as the Fantasy Fest– we find a duo from the Czech Republic. Their name? Nemuer! Their music? Atmospheric dark pagan folk. During the concert, Michael Zann and Katarína Pomorská intrigued me with their slow, mystical, slightly eerie folk sound. Especially Michael’s acoustic guitar playing and the voice of Katarina impressed me enough for me to buy their second CD Labyrinth Of Druids, an album I would describe as a long dreamy atmospheric yet eerie pagan folk soundtrack. Very intriguing, with its mix of delicate acoustic guitar, female vocals, and carpets of slow symphonic keyboards underneath. This CD would work perfectly as a score for any slightly darker fantasy movie. Fast forward two years and I found myself in 2019. After publishing the review for Sowulo’s latest album, Mann, I got an email from Michael asking if I would be willing to review their latest record, Urðarbrunnr. Remembering how intriguing I found Labyrinth of Druids I didn’t hesitate to say yes. And Urðarbrunnr didn’t disappoint. The band still makes slow, atmospheric, dark, pagan folk that really captivates the listener, in its own unique way. 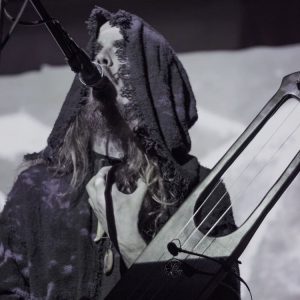 From the beginning they have aimed to bring ancient myths and stories back to life, using authentic dead languages and ancient instruments to do so. Their first album Irenthot’s Dream (2014) was set in the ancient Mayan Empire. Their second album Labyrinth Of Druids (2015) is described by Nemuer themselves as a Lovecraftian music album. In 2018 they released their third album Gardens Of Babylon during a concert together with the kindred spirits of The Moon And The Nightspirit. As the title suggests, Gardens Of Babylon is set in the ancient city of Babylon and talks about the heaviness and beauty of death. The album itself sounds a lot more open and ‘positive’ than the theme suggests. The focus is less on the symphonic keyboard carpet giving Labyrinth Of Druids its special soundscape feel, but more organic, more acoustic. It is actually the folkiest album Nemuer has made to date. And there is indeed a similarity to the music of The Moon And The Nightspirit that fans of that group may find interesting. And now there is Urðarbrunnr. The band -In 2019 Nemuer grew to a full band with Alex Pantea on Duval and vocals and Martin Kopl doing the programming and live samples- takes us to another period in ancient history with this album. An entirely different part of the ancient world altogether, I may add. Readers interested in Nordic mythology will recognize the album title as the well of Urd, the well as described in the famous Edda, to be found beneath the world tree Yggdrasil. And indeed, true to form, all the lyrics are composed of extracts of the Edda, the old Norse sagas. I just have to mention track titles like: Ymir’s Death; The Binding Of Fenrir; Yggdrasil trembles and Thor’s Final Battle, and the true fans of Nordic folk and folklore will know enough. 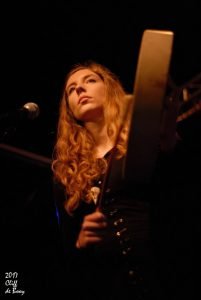 The first track, Ymir’s Death straight away sets the tone for what you can expect from Urðarbrunnr. Deep low keyboard samples setting a grim atmosphere and the acoustic sound of the bass tagelharpa- an ancient Nordic lyre type instrument- giving it an authentic touch. You could call it a mix between the atmospheric semi-acoustic sound of Trobar de Morte and the slightly sharp, grim, big sound of the early 80’s gothic rock bands. Especially Michael’s style of whispered throat singing that Michale uses throughout the whole record takes me way back to the Fields Of The Nephilim. An underestimated Gothic rock band from that 80’s period that I just love, but way, way slower. Bands like The Sisters of Mercy, the Mission and Fields of the Nephilim used to have a quite danceable, relatively fast beat under it. But Nemuer plays their music much slower. Their drumbeat is more similar to that of Trobar de Morte or even Wardruna. Compared to the previous Nemuer albums I find Urðarbrunnr darker, less open in production. Quite fitting for the Nordic themes Michael “whispers’ about. Also, the female vocals from Katarína seem almost non-existant on Urðarbrunnr. Again a choice that I well understand considering the current theme of the songs The second song Snýsk Jörmungandr is again a very good example of Nemuer’s present sound. The drums are slow and deep. With the repeated bass tagelharpa, the female vocals – yes here Katariína makes a vocal appearance- weaving in and out, Micheal’s combined slightly distorted deep throat singing combined with whispered Nordic vocals, and the carpet of keyboards under it the song becomes almost trance-like. But not boring. Just at the right moments a whispered voice, a sudden female vocal or even a tempo change comes in to keep the song interesting, intriguing, 07:34 minutes long. Not all tracks are that long, but Nemuer do take their time building up a song, as you might expect from a dark, atmospheric, gothic, pagan folk band. Hel is one of those shorter yet equally powerful songs. A single shaman drum being hit, each new hit several seconds after the other, eerie whispered vocals drawing you in, a single horn-like sample, some keyboards setting the tone. It is all the song needs. Listening to Hel I suddenly realized how well the music fits with the painting on the CD cover. Grey, grim, but not utterly black. Just many shades of beautiful grey (Pun not intended). 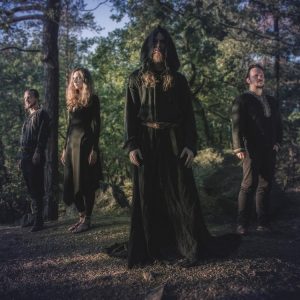 The Binding Of Fenrir is another one of those beautiful repetitive grey songs. Again that slow, deep shaman drum sound captivates me. The start I find almost minimalistic by nature, and slowly, ever so slowly building up to an epic track with strong choir-like vocals, an electric guitar, picking up the melody in such a way, that for a moment I’m sure that I’m listening to the violin on a track from Turn Loose The Swan, that legendary album of My Dying Bride. But not long. The horn section coming in takes me right back to Nemuer’s own specific style. Michael’s throat singing vocals are the finishing touch on this wonderful epic, dark song. I’m quite aware that Urðarbrunnr will not be everybody’s cup of tea. But I personally love songs like: Odin’s Quest For Wisdom; Heimdallr Blows Gjallarhorn; The Allfather Dies -with a nice bit of overtone singing from Michael- or Thor’s Final Battle. They all are beautifully dark, slowly-played, gothic songs, drawing me deep into the Nordic mythology. Michael and Nemuer play very cleverly with the contrast between the mystical electronic samples and the clarity of the acoustic instruments and the sudden shifts in tempo like on Odin’s quest For Wisdom -I love the tribal ending of that song – regularly add interest, preventing the music to become boring. And there are more of those clever arrangements to be found on Urðarbrunnr. In songs like the -almost- cheerful Freyr’s Lovesickness, or my favourite song Yggdrasil trembles, with that lovely low tagalharpa sound that makes me think Faber Horbach (Sowulo) joined in. If you like your clothing dark, and if you share my love for:Nordic folk; atmospheric folk bands like Trobar de Morte; slow, almost doomy songs that keep drawing you in a trancelike state; and gothic acoustic rock, then check this Czech band out. Nemuer made a very strong -and within the limitations of the genre- even varied album. For the true connoisseur of dark music. – Cliff -Editor: Sara Weeda. cover art: Kuba Vaniš picture credits: -Nemuer, -Cliff de booy, -Nemuer