The last days of the year 2019 are passing by fast! Especially now that we are working so hard to have the new server up and running in the new year. The majority of our old collection has been reassessed and transferred to the new server. We are processing new music these days immediately upon arrival! We are so happy that we can show you the results quickly! Below are some featured albums that were processed this week. Have fun reading and of course, we are curious about which acoustic folk music you like!

Sowulo – Dageraad (2016) Sowulo released a new album this year (review dd 24th Oct, made by Cliff de Booy), but the CD you see in the picture is an older one from 2016. This one contains only one song, namely ‘Dageraad’. This single was intended as a sponsorship campaign for a full album. The album in question was released soon after and was called ‘Sowulo – SOL (2016)’, on which ‘Dageraad’ was, of course, featured once again. Did you know? A couple of band members are also members of ‘Heilung‘! 🍂

OMNIA – World of Omnia (2009) This band regularly comes back in my reports. Omnia has made so many albums! On this one, they name their development: “What we were, what we are and where we are going… welcome to our World”. There are two live songs on it, five older songs as a remake and seven new songs. My personal favourites on this album are: “Old Man Tree”🍁 and “Dil Gaya” (trad. Hindi). The album is beautifully designed again with a booklet with nice photos, the lyrics and the origin of some songs. Very happy with our signed version! 🌳

Jyoti Verhoeff – Phoenix (2012) Jyoti is one of my favourite artists and she made this album together with the talented cello player Maya Fridman. The songs are often focused on nature and that what’s important in life. The album, signed for us 😊, is beautifully made with a booklet with atmospheric photos and lyrics (Sander Van Den Berg, Yana Kovtun and Jyoti herself). I cannot choose a favourite song… Sit down and let yourself be carried away on the beautiful magical sounds. 💚

Rapalje Celtic Folk Music – Rakish Paddies (2003) This is something completely different. Time for an Irish party and a good glass of beer? Then it’s time for Rapalje! The album is a mini-book, the CD itself is in the back. The booklet contains beautiful paintings of the band members. Rakish Paddies’ contains no less than 21 songs since it actually is a collection of three albums into one: Celts in Kilts (1997), Rakish Paddy (1999) and Wack Fol the Daddy-O (2000). 🍺

AmorromA – Op Voyage (2001)Their Facebook page states: “AmorromA, the musical brainchild of Jowan Merckx, is a Belgian folk band that creates its own music based on traditional music from all over Europe”. In the booklet, they tell us that they have made a musical journey with a couple of friends of musicians from too many bands to mention. 😁 The different types of flutes are central on this album. Probably also a favourite album for our Balfolk friends (Mazurka, Bourrée, Scottish)! My favourite is ‘Over de grens’ (translated into English: ‘Across the border’). For me, as I Dutch lady, Belgium is also ‘just’ across the border. 👣

Irfan – Irfan – remaster (2019) This album is a remaster of the album ‘Irfan – Irfan (2003)’. Not a new album, but the old album recorded with much better listening quality. For CeltCast as a folk radio station, this older album is on the border in terms of format, but still we will play a couple of songs of this remastered version. 🕌

Ranarim – Morgonstjarna (2006) Unfortunately, this band no longer exists, because … I love their work! Beautiful folk music from Sweden! All 15 songs will be played on our radio station. Folk music to dance to and to dream away by. Beautiful voices and folk instruments. The album also contains a Christmas song. All the lyrics are in the booklet (in Swedish, of course). 🥰

Prima Nocta – Lost in Time (2017) Of course, the savage men of Prima Nocta also belong on our radio station. 🙂 We can play 11 of the 15 songs, since they fit our format. The album and booklet contain beautiful drawings by Bart van Nieuwerburgh. Listen to the energetic Medieval, Viking and Celtic sounds. When you see them play live, you also see these beautifully savage men in equally beautiful historical clothing. ⚔️

Triakel – Triakel (1998) Last week I already told you about this Swedish folk music. This is another album of this fantastic band! And, I have news for you… soon… we’re going to play songs of their newest album! I’m going to tell you more about that later. 😍

Kallidad – The Awakening (2017) In November I already told you about our meeting with the Australian band Kallidad at Elfia. On this album there are only two songs we can play, but I’m really happy about that. If you need some energy… put this album in the player and I promise you… you can’t sit still! 🎭

That’s it for now. Merry Christmas, Happy Yule and a Musical New Year!🎄 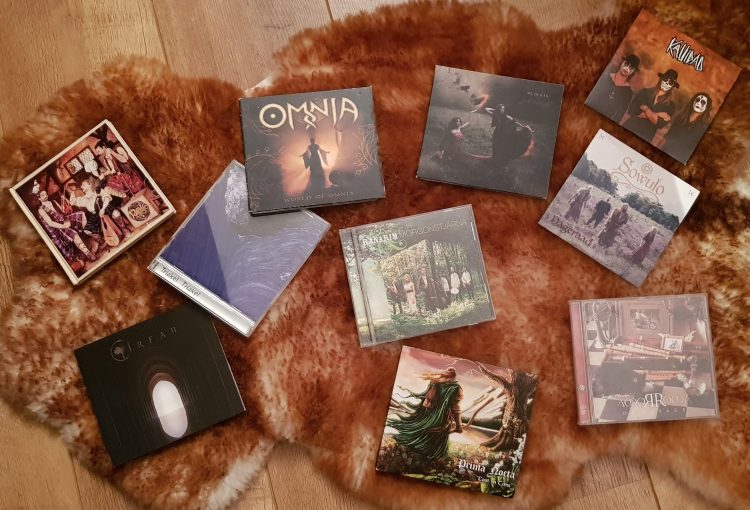 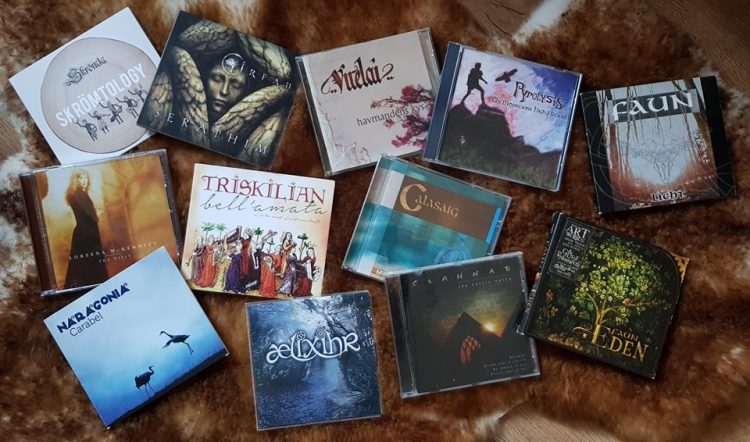 Another weekend has come and gone. and what an amazing weekend we had!

A part of the team visited the Autumn Moon festival, of which we will share pictures really soon. While another part went to see Irfan + Cesair in Poppodium De Peppel !

Video’s of both festivals can be seen here : 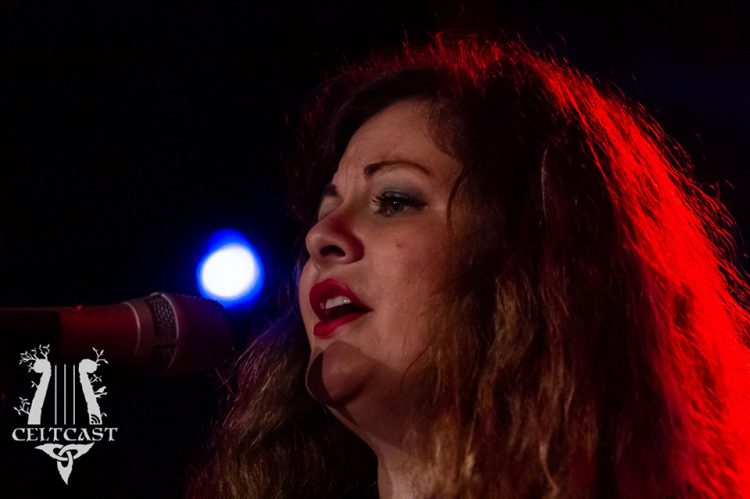 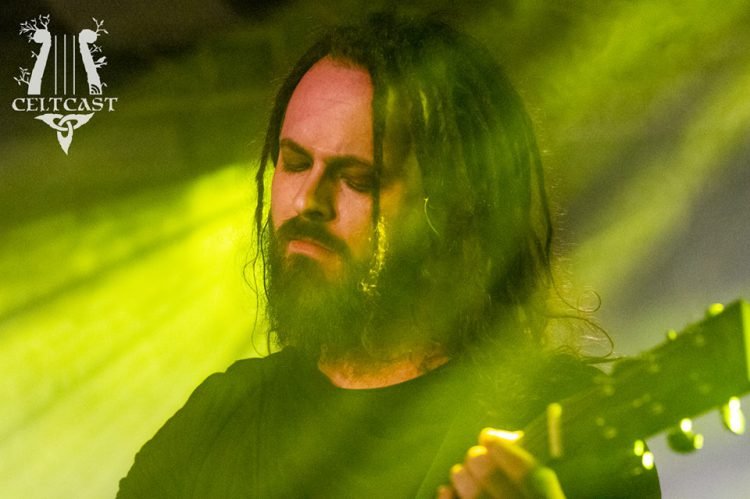 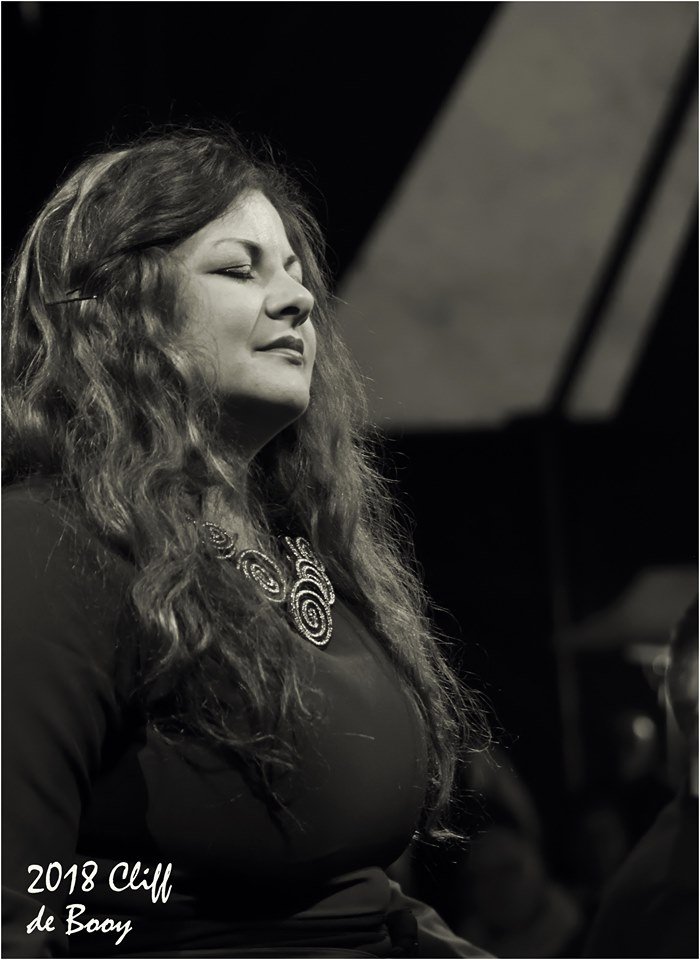 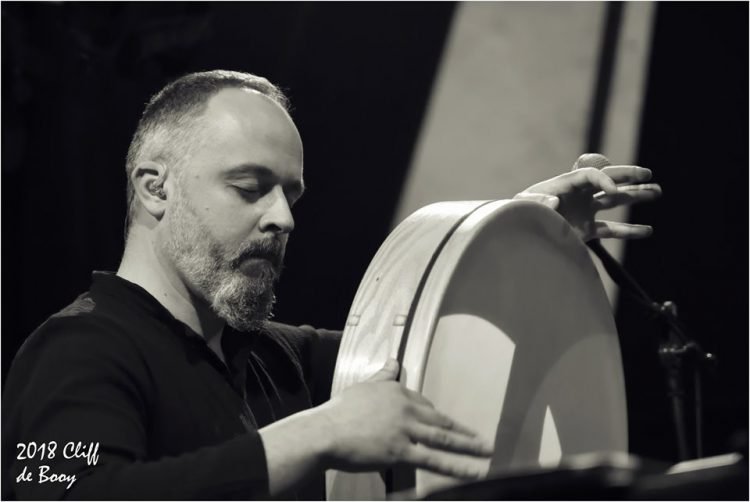 The summer festival season is over, soon it’s time for the small intimate club shows, winter holidays and a merry old time.

However, there are a few organisers that seem to think, a festival season is never over. Over the coming months there are some awesome indoor and outdoor festivals, like Castlefest Winter Edition 2019 , the Mittelalterlich Phantasie Spectaculum winter edition in Dortmund, Midwinter Fair Archeon , and Fantasy Fest Rijswijk but first it is time for the Autumn Moon Festival 2019 !!!

Next week, a few of our photographers will visit this festival and bring you a report of the shows by Irfan , Forgotten North , EmBRUN , Ye Banished Privateers and Heilung .

And maybe many more as the line-up is awesome and filled with bands we have never seen before! 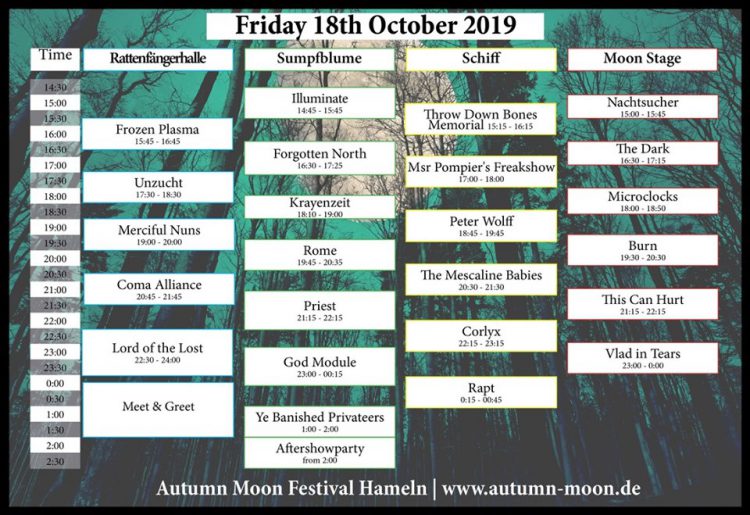 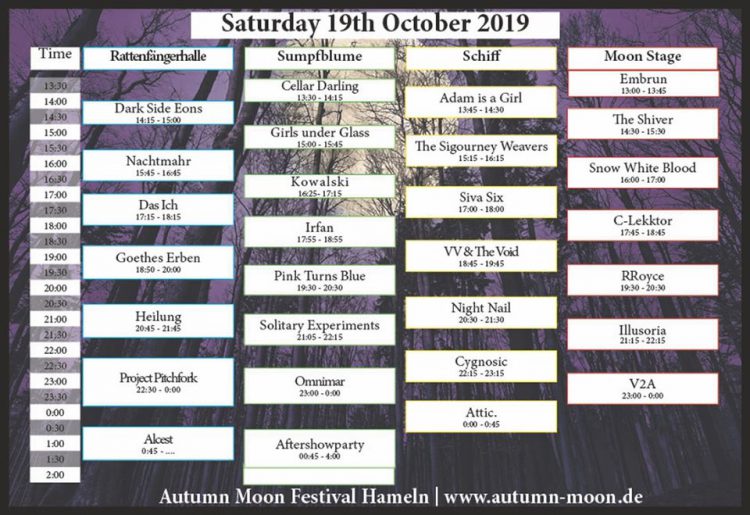