It’s unimaginable, but it is already Monday and again we have 12 beautiful albums for you to show. So… soon to be heard on our renewed radio station!

We start with a few new albums: during Elfia Arcen we acquired no less than three albums of The Trouble Notes from Berlin. I’m going to jump on only hearing their name! What a talented violin player Bennet Cerven is, what a lot of energy! On a tough day, this music immediately makes you smile again! Love it! <3

Friendly Folk Promotion gave us another album made in this year, called “Welcome Autumn” from the band Scarecrow Jack . A folk-rock band from the Ohio Valley. Pirates, this one is for you! 🦜

Yesterday, Hans Elzinga had his album release party in Leiden (NL) for his CD Introspective. An album that guarantees a very relaxing afternoon on the couch with, of course, incense (name of the first song) on. Not as much an album with pure folk music, more world music, recorded at Dearworld Studio by Fieke van der Hurk. 🧘‍♀️

Last week the Witchcraft (2018) album of Trobar de Morte fell on the CeltCast doormat … Wow, I am very impressed by this album! There is no “best” song. The entire album is one beautiful story, like watching a movie with your eyes closed. I’m in love! <3

We obtained the CanzonettaTedesca album ( GoldenCore Records ) during Festival-Mediaval in Selb, last September. With this album we go back to the German Middle Ages. During this festival we also made live streams of this band. If you want, you can look back these streams by checking our videos. Offline material will follow later on YouTube.

And then we also show seven older ones. All beauties with their own style. The Moon and the Nightspirit copy even is a double album! 😍 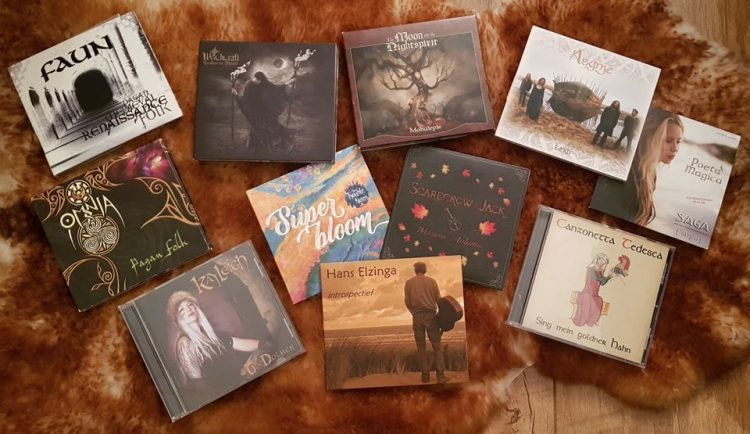