Also this week, a lot of hard work has been put into setting up the new radio server. And, we have a theme this Monday, namely: “Close to the CeltCast home” ! 17 albums that were created in the Netherlands and by our neighbours from Belgium.

They are all beautiful albums with their own style! The Ambrozijn album (Wim Claeys, Wouter Vandenabeele) dates from 1998 and contains very original songs. I love it! 🎼

The two albums of Rapalje Celtic Folk Music were bought a long time ago in a beautiful wooden box with lovely detailed booklets in it.

For our balfolk fans we have a number of very danceable albums, such as those from Itchy Fingers , Snaarmaarwaar , EmBRUN , Té , Tweedledum & Tweedledee , Le Vélo Vert and Ambrozijn.

We bought the album of Snaarmaarwaar (together with two others) at a very special festival in Belgium: Celtic Night Geluwe . We still miss that wonderful event. Ann and Marc created this festival every year with heart and soul!

The Harmony Glen “Live in Bremen” album is a recording of a concert in Germany. It is a party to listen to this. Jump, jump!

Two albums of Tjarda , “Fairytale Folk” is one of my favourites! Tjarda has a beautiful voice and the harp she plays, gives a nice “fairy” atmosphere. 🧚‍♀️

And, to stay in the mood of the Fairy tales … the album of Elvya Dulcimer “Untold Stories”, where the front of the album perfectly reflects the atmosphere of the narrative (dulcimer) music.

This week again an album of OMNIA, LEAF ( Kati Rán , Tho Mas , Marijn Sies , Fieke van den Hurk and Chloé Bakker ) and SeeD Pagan Folk , which are, in their own way, very special to our scene.

Are you familiar with these albums? Tell us about your favourites!

Very happy that these beautiful CD’s have been processed: 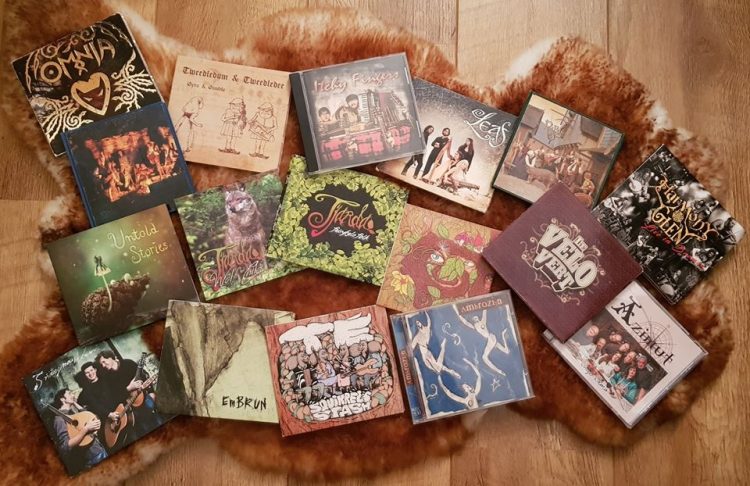