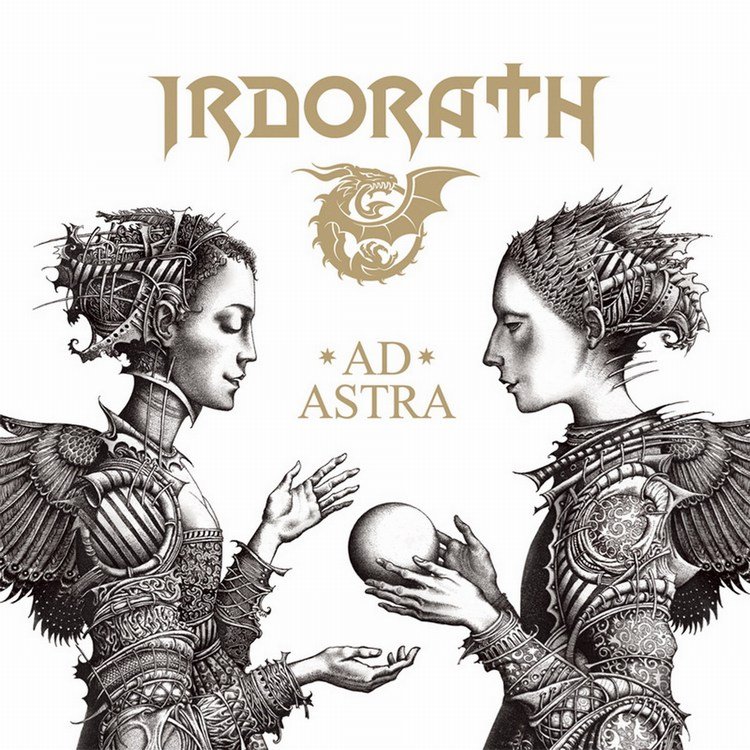 Do you believe in love at first sight? I do! It happened several times actually. But it has been a while since anybody blew me away so completely as the Belarussian band Irdorath. What? You thought I was talking about my love life? Nooo, I wouldn’t want to swap my lovely girlfriend with anybody. It was actually her who started this new ‘crush’ by pointing me towards Irdorath’s amazing ‘performance’ at this year’s Castlefest home edition. Recorded at night in the forest, Irdorath totally WOWed me. And I wasn’t the only one. The whole stream exploded from all the amazed reactions: -Who are those guys!’ -‘They sound amazing!’- ‘What a cool set up!’ -‘Please bring them to Castlefest next year!’ -‘I love them’ That was the tone of the stream during their half an hour set. A couple of lucky viewers that had already seen this impressive band on German festivals or the Dutch Middeleeuws Winschoten festival gladly confirmed they had been as impressive live as they looked on that video. And I had only one thing on my mind: Get their albums in as fast as possible, listen to them, and introduce this amazing band to you all. Soooo, This is Irdorath!!! 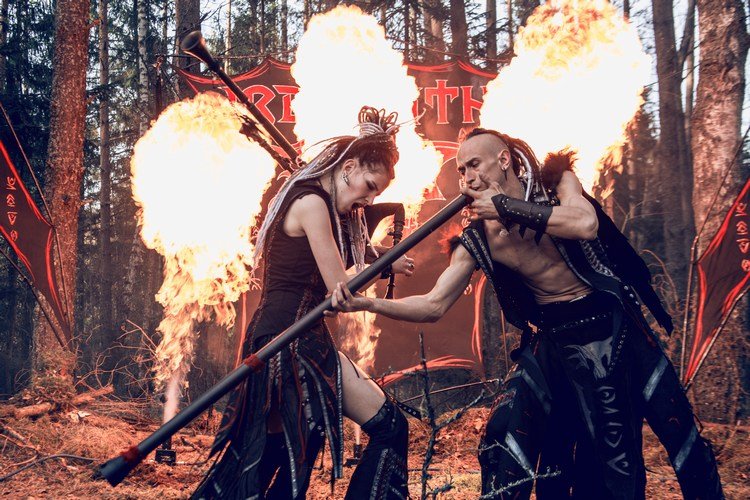 Irdorath’s story also begins as a love story, with bandleaders Nadezdha and Vladimir meeting each other as students, not only to start a medieval performance group but also to become a couple. (They even married on stage, but I’ll come back to that in a later review) In 2011 the two drop their day jobs, move to Minsk, and start turning an abandoned building around to a performance theatre for historical events. Early on in the project, Anton Shnip joins in and the basis of Irdorath is formed. At the start the trio focuses on a catchy mix of typical German-style medieval music with a real dance feel, a powerful mix of rauschpfeife, bagpipe, chalumeau, and fast upbeat percussion, littered with orchestral moments and intense tender breaks in the music. From the start it’s obvious that Irdorath don’t do subtle. The intro is as theatrical as you can expect from a medieval performance street art group. A thunderstorm opens the CD with a lone bagpipe leading us into the music. A loud musical BANG introduces a huge film score type of choir. And then we are off. Cool dance beats get your feet going immediately. A catchy bagpipe melody leads your brain into its happy state and the film choir returns for maximum impact. There are worse ways to start an album, trust me. Listen to opening track Rondo and you’re hooked. Permanently! The second song, Scudrinka, is a Macedonian traditional dance that got the same Irdorath treatment. The acoustic drums give the song a lovely groove. Fast, powerful but really danceable. The strong sound of the bagpipes and rauschpfeifen, so typical of the German style of medieval music (think of bands like Corvus Corax or Prima Nocta ) sticks in your brain like glue, but its the Eastern European flavour that makes this music so interesting. Where a true German-style medieval band, like Corvus Corax, can seem to be just loud and in your face, Irdorath’s music is much more diverse and dynamic. Sure, Irdorath can sound exactly like Corvus Corax. A song like Bard’s Tale or the midtempo ‘waltz’ Saderalladon would do well on any MPS festival, but there is much more to their music. That sudden break in Scudinka for example, where suddenly the wall of sound drops down to a single beat and an exquisite eastern guitar or sitar melody. Really cool. In general, their sound is also lower than I am used to. Less ‘shrieking’ and percussionist Anton puts WAY more groove into his drumbeats than a regular German-style band would do. With the 5th song Tourdion, the musical adventure truly starts. We leave the German medieval festivals and go to the East. Another film score type intro sets the mood, and sure, the start of the song is what you would expect, rauschpfeifen playing that all too well-known medieval tune, (with a beautiful orchestra under it by the way), but this wouldn’t be Irdorath if there wasn’t a twist. Suddenly Nadezhda, with nothing else than a simple piano, takes the whole thing down. As if John -music was my first love- Miles suddenly takes over. The orchestral section that follows is so powerful. This is by far the most impressive, most grand version of this medieval classic that I ever heard. This song alone proves how good Irdorath are as musicians and arrangers. Truly stunning. And they have no problem stepping it up another few notches live on stage, adding a 4-piece ‘choir’ to this 2015 live performance. How I wish I could see this being performed live myself, if only just once. That’s the true strength in Irdorath’s music: their arrangements. The space they leave in their sound. Although they often work with two bagpipes (with rauschpfeifen attached to it in true German medieval style); powerful drums; a powerhouse of a voice; and that rich deep sound of the Slidgeridoo sometimes appearing, they are able to give their songs room to breathe. Be it in interesting musical breaks with sudden twists; clever stereo effects and well-chosen placement of the instruments in the sound; or those Eastern European influences effortlessly blending in their sound. Even in those power sections, Irdorath manages to sound ‘acoustic’ and that is what I love about them. That and the variety in ideas. 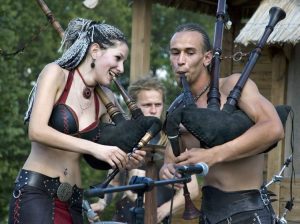 Did I mention a slidgeridoo and a powerhouse voice just now? Yep, in Ketri we hear both of them prominently for the first time. The song itself is Irdoraths interpretation of a Romani love song, and it takes the band even further away from that initial German Medieval style, deeper and deeper into Eastern Europe, even into Turkish music at some points. In Cypridis In Vito the band uses those cool stereo effects and even some Medieval-type choral singing, before they throw out the whole musical rulebook, blending all the influences I mentioned before in one cool, typically Irdorath song. Ad Astra is an album that is almost impossible to describe. It starts as a German-style Medieval party and ends as an Eastern European/ Arabian/Mongolian pagan folk-rock opera. The song Ad Astra is a pure treat for those who love upbeat experimental power folk music. If you like your folk music Celtic, gentle, and peaceful you might want to tread carefully. But if you’re up for an adventure, and your record collection contains music from bands as varied as Dead Can Dance (especially their 1990 album Aion); Prima Nocta; Corus Corvax; Jimmy Page and Robert Plant at the time of their No Quarter album; Irfan (just listen to the title song Ad Astra for some beautiful typical Irfan magic), and yes even Ayreon (listen to those electric guitars suddenly appearing in Nupla Nu Te Lasa), then definitely give this wonderful debut album a try. You’ll be hooked. Don’t say I didn’t warn you… Cliff Editor: Sara pictures and video’s: Irdorath