‘Sangre de Muerdago stands on the wild side, on top of the cliffs, at the depths of the woods…., Galician Folk songs to heal and roam, to dance and love.’ These are the opening lines of their bio on Bandcamp, and I could not have said it better myself. I first heard of this Galician band (situated in Germany) through the site Hierba Loba of Vael‘s singer and multi-instrumentalist Dani Iturriaga who has been a fan of the band for years. He introduced the previous Sangre de Muerdago album Noite with the following words: ‘Comprado en uno de los conciertos más mágicos a los que he asistido.‘ (Bought at one of the most magical concerts I have ever attended.) That was enough for us to look up this lovely band and we were not disappointed. Noite is a lovely album that we already play in our stream and we were anxiously awaiting the follow-up album Xuntas. In November of last year Pablo “Pabs” C. Ursusson (classical guitar, hurdy-gurdy, music box, steel-string guitar, bells, lead vocals), Erik “Erich” Heimansberg (flute, pandero de Peñaparda, bass clarinet, vocals), Hanna Werth (viola, vocals), Georg “Xurxo” Börner (nyckelharpa, vocals) and Asia Kindred Moore (Celtic harp) released Xuntas and it has been patiently turning its rounds in my CD player ever since.

Before I start the actual review there is one more person I should mention here. A person whose name you will always find in the band’s artwork, and also in interviews with the band. A person who, when I asked Pablo if he could give me the lineup of the band, was credited to deliver ‘Melodies from the Otherworld’. This person is Jorge Olson de Abreu. Pablo explains: ‘Jorge died after we recorded the demo, before the first album was recorded, but for me, he has always remained part of the band. Even though he has been gone 12 years now, I still consider him an active part of Sangre de Muerdago if that makes any sense.’ It makes perfect sense to me, so with this being the first Sangre de Muerdgo review I do, it feels fitting to dedicate this review to a man that will [quote]: Always give inspiration from the otherworld. (Noite). Your legacy still lives on Jorge. Xuntas 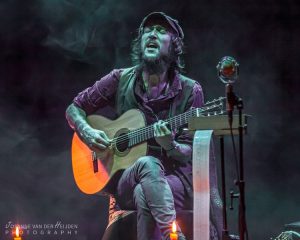 Trust me, if you acquire Xuntas you will be in for a treat, starting from the very, VERY first note you will hear. You almost expect a Spanish song to start with classical guitar and Sangre de Muerdago kindly fulfills that expectation, soon followed by the melancholic sound of a nyckelharpa and one single voice. But what a voice! Pablo has a voice so tender, soothing, pure, and delicate at the same time that I’m captivated from the first note he sings. A lovely flute solo is the icing on the cake. Sangre de Muerdago’s music is the beautiful sum of three simple ingredients: a lovely combination of singer-songwriting, a delicate sauce of European folk, and a slight seasoning of classical chamber music. This is fine dining put to music. The first song Cadeliña is a perfect example of it. If you love this song, you will love the whole album. And what do you drink with an exquisite meal? Wine, of course! Wine; rich, velvety red, but still smooth to the touch. The second (title) track Xuntas oozes that out from all sides. It is true European folk with rich harmonies, strong classical influences, and an exquisite touch of Arthuan Rebis‘ magic to finish it off. Truly stunning. The title track Xuntas, featuring guest vocalist Steve von Till (Neurosis). Sangre de Muerdago master instrumental songs just as well. They have a lovely open sound to their music which is like a gentle breeze on a spring day. All the instruments the band play have this calming, this soothing quality. Acoustic guitar, Celtic harp, nyckelharpa, viola, bass clarinet, even the hurdy-gurdy (!), are all recorded perfectly clean, all are played light as a feather, full of emotion, full of love. Is there a thing called instrumental singer-songwriter music? If you listen to Unha Das Peores Cousas Que Escoitéi no 2019 Foi “Pedir perdón é un acto de debilidade” (what’s in a name?), the answer is yes. Every word is said without speaking. Every syllable is captured in notes. I should compliment the sound engineer Tobias Häussler too here. This is recorded so beautifully; so full, so rich. You can hear every note played; the attack of the nyckelharpa (I always love hearing these rhythmical clicks as the notes are played); the natural richness of the guitar and harp; and then there is the impressive orchestration, the grand build-up of melodies at the end. The Magic Door meets Vael. And then you get those subtle notes at the very, very end! Yes, this song has everything an impressive instrumental music piece needs. The song with arguably the longest songtitle ever: ‘Unha Das Peores Cousas Que Escoitéi no 2019 Foi “Pedir perdón é un acto de debilidade’, featuring Germán Díaz on hurdy-gurdy The magic continues 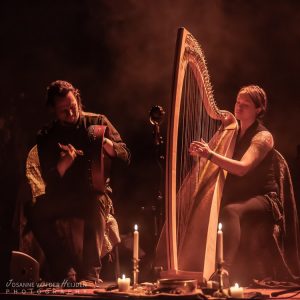 I mentioned Arthuan Rebis and his project The Magic Door before and in Canción de Berce I am reminded of him again. I find him in that clever use of the viola and harp, combined with this slightly melancholy music Sangre de Muerdago plays, in a style I just cannot define and don’t want to define, actually. I just want to listen to it and float away into my own little dream world. A world where spring mornings last forever. A world where Arthuan Rebis and Árstíðir are happily sharing the stage on a Castlefest Sunday morning. I can easily see myself sitting on the hill opposite the old Folk Stage at Castlefest, soaking this all in. My eyes closed, loving every moment of it, knowing a whole crowd is doing the very same thing. And they would, I’m sure of that. Sangre de Muerdago’s music has a timeless quality to it, a melancholic beauty that instantly sweeps you away. On Lonxanía a lot of medieval influences flow into Sangre de Muerdago’s music. Let’s say we have Datura, Meidi Goh, SeeD and Árstíðir together on stage now. Pablo also shows a different aspect of his voice in this song, much stronger, but still perfectly in tune and full of emotion. The singer-songwriter is gone now and the medieval bard appears. (Iris, the lovely editor of this review even got some Russian vibes from the vocals.) It makes Lonxanía a lovely contemporary take on medieval music. 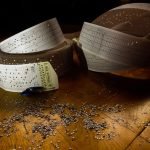 María Soliña is a small song, a moment in time captured on tape. An honest celebration of life caught in a whistle. Nature’s beauty put in a few guitar notes. This proves once again that singer-songwriter music doesn’t need words. Not in this case. Not if you are Sangre de Muerdago. Coma Un Bico reminds me a lot of Vael again, just as rich and beautiful, but without the Oriental influences that are so distinctive of Vael’s music. And I truly adore the music box/finger-picked violin ending of this song. It is as if Sangre de Muerdago brought that music box to life in the studio. And maybe they did, who knows! A lovely live version of Coma Un Bico I could go on and on about this album. And listening to the powerful, captivating chamber music melody that is Foliada de Tenorio, I really have to restrain myself not to. But I know I’m only going to repeat myself. There just are no highlights on Xuntas, the album itself is the highlight! Eleven beautiful songs long. European folk meets classical chamber music. Medieval music meets contemporary folk. Even pagan folk (ZiRP) meets medieval folk. Just listen to Heavy Mental and you’ll know exactly what I mean. What a treat this is. From the very first guitar stroke till the very last music box notes, this is a stunning album. Truly! I cannot think of any reason NOT to acquire it! – Cliff editor: Iris Cover art:Kaska Niemiro band pictures: Josanne van der Heijden Music box picture: Sangre de Muerdago