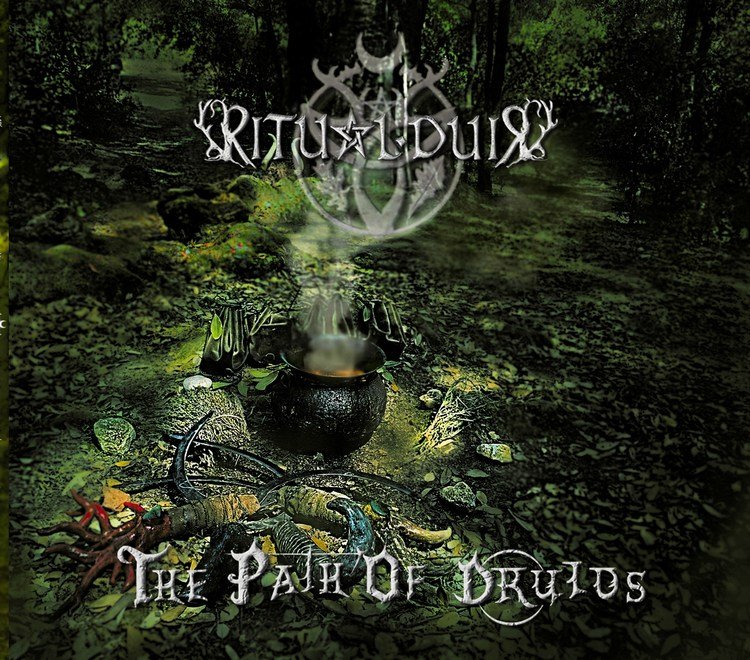 This is going to be a review that is very, very dear my heart. It all started in 2018 when Rose Avalon – who had already left Cuélebre at that moment- and Belenosa Alba – a flutist and horn player Rose met the previous year- gave me, among others, a 3 track demo with the request to give some honest feedback. On that demo were three acoustic tribal pagan folk songs with some amazing vocals from Rose. So my feedback was short and sweet. ‘Rose, I love this!’ Over the next one and a half years, Rose and Belenosa kept sending me updates that kept whetting my appetite. At this year’s summer Castlefest I finally got the full demo version of The Path Of Druids. And although still not in it’s final mix, the music blew me away. ‘This can’t get any better.’ I thought. But listening to the finished album I realize how wrong I was. It CAN, and it DID! And the best thing about it? I can FINALLY break the silence!!! Everybody!! Rose Avalon has a new pagan folk CD out! It’s called The Path Of Druids!! And it sounds A-MA-ZING!!!!!

Of course we know Rose Avalon as the lady who replaced Marta Gálves as the lead singer of the Spanish pagan folk band Cuélebre. A band she joined because she wanted to express her love for folk music and her passion for nature. But Rose has been making music her whole life. At the age of 18, she recorded her first pop-rock demo under the name Equivocada Humanidas. She studied drama and acting and did some cinematic work in Barcelona, having one of the lead roles in the movie Pactar con el gato for instance. She even wrote a vampire novel called Nocturne Para Violín – Nocturne For Violin that is still easily available as eBook. In the last seven years, she has been making progressive folk metal with her band Rose Avalon, recording a first album called Northern Strengths that came out in 2014. During those metal years, her desire to make pagan folk became bigger and bigger, so a wish came true when she was allowed to join Cuélebre as their second lead singer.

In September 2017 Rose left Cuelebre again to focus on her own music as a singer and bagpipe player and formed Ritual Duir, together with somebody who crossed her roads, who had an equally big interest in Celtic music, had the same passion for nature and who became a dear friend: Belenosa Alba on backing vocals, flute and horns. Belenosa also dedicated her whole life to music, she started playing music when she was 6. In a chat she told me: ‘Learning music is really expensive, but luckily I could join a music school founded by people who were willing to do that for free so that the kids could experience other skills than only sports or dance.’ It was a project that inspired her so much she now does the same thing herself, running a music school that teaches the kids for free. In the end she was able to study classical flute at the Conservatory of Music of Barcelona. But she always had a love for Celtic music. When she and Rose finally met, everything changed. Ritual Duir was born. The band’s line up was completed when drummer/ percussionist Jose Mouro and guitarist David R joined Ritual Duir prior to the release of Path Of The Druids. Rose explains on her webpage that Ritual Duir was created in honour of the trees, the forest, the fauna, and the ancient druidic wisdom. The band does that with a powerful mix of tribal pagan folk music and touches of Rose’s metal background. A mix that makes them unique in the pagan folk scene. A mix that makes The Path Of Druids, one of the best, most powerful pagan folk albums I have ever heard. The musical magic starts right after the spoken intro, with a cool keyboard melody line that reminds me a lot of that used by bands of the new age/dance scene in the ’90’s like Sacred Spirit or Dance to Trance in their big hit American Natives. But Ritual Duir doesn’t put a big beat under it, nor do they flow into a mellow soundscape, no they use that same sound to create a dark mystique musical carpet, just as bands like Trobar de Morte do so well. Those Trobar the Morte like keyboard soundscapes run through every song on The Path Of Druids, giving the album an ancient, slightly dark feel. This feel is even enhanced by the deep shamanic tribal drum that not only drives the first song –When The Human Arrives– on, but is found all over The Path Of Druids. Rose and Belenose managed to capture a strong ancient feel in really catchy songs that draw you in instantly. And then I didn’t even mention the biggest highlight of The Path Of Druids yet. The vocals! Rose Avalon is blessed with an amazingly versatile voice, powered by some huge lungs. She can do it all! powerful clean metal vocals, soft angry whispering, high classical soprano, soulful rock vocals, and jazzy singing lines, she throws it all in as if it is nothing. It’s the combination of her strong vocal performance and the dark intense music that gives the lyrics of The Path Of Druids its power. And those lyrics are important. Rose, who wrote all the lyrics, has something to say. When The Human Arrives, for instance, is a clear statement about how she feels the human race is mistreating and polluting the earth. The second song Samonios is dedicated to the Samhain ritual. In this song Ritual Duir takes us through the veil into the ancient world of the Celts, the age of Boudica, and again in a very powerful way. Ritual Duir doesn’t think in style boundaries. They give the music what it needs. We already met Rose’s powerful metal voice, and the band isn’t afraid to through in a strong electric guitar chord when the music needs it either. They play ever so cleverly with the contrast between clean acoustic guitar and recorder and the dramatic powerful sounds of the keyboards and rock guitar. It is if you are listening to a jam session between Cuélebre, Trobar de Morte and Wadruna who invited Josh Elliot of The Dolmen to add his guitar sound. Deep, dark and powerful! Just listen to that deep male choir under Rose her vocal solo escapade! So clever. So well arranged. 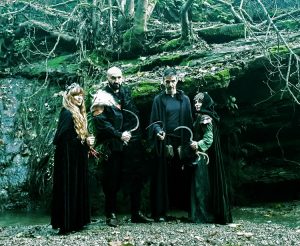 Wild Balance is a cheerful upbeat song. This is Rose is at her best as a singer. Her voice is so expressive, she uses her acting background so well. She can sound cheerful and loving -as she does here- angry and vicious, deeply sad -as she does astonishingly well in the song Tears For Ynys Mön– or seriously threatening. That alone makes this record so appealing to me. But it is not only that. It is also the wonderfully written and well-arranged songs on The Path Of Druids. Every song is a delight for the ears. a rock opera in itself. That is what this album actually is. A pagan-folk rock opera. In Wild Balance Rose’s loving friendly voice, together with the upbeat tribal drums; Belenosa’s recorder melody; the acoustic guitar and Rose’s bagpipe, invite us all to connect with mother nature in the ancient Celtic way. Again that Josh Elliot electric guitar riff at the end of the song gives the music an extra layer. A deeper dimension. And I’m loving it. Not all songs are about nature, To Come Back Home addresses three strong topics at one go: The stupidity and destructiveness of war; female independence, and the hurt of someone who loses a loved one. Rose throws out some impressive ‘panting’ vocals as Eivør does in the song Trøllabundin. Again the message is packed in that stunning mix of pure pagan folk and female-fronted metal power. Electric rock guitar, recorder, bagpipe, keyboards, they all add up to create a really strong sound that it is truly mesmerizing me. Now I could really go on and on about The Path of Druids, taking every single song and going into every detail of why I love it, but that would take away all the fun of discovering this wonderful album yourself. So I won’t mention the bagpipe on Your Memories Will Rest In The Trees that make it seem like Corvus Corvax just joined this pagan folk extravaganza. I won’t tell, how Rose’s acting skills really shine on Tears Of Ynys Mön. How she acts out the grief of a whole Celtic tribe whose lands have been burned to the ground by an enemy. Nor will I mention the lovely, almost theatrical ballad Stars, or the fun energetic folk party that is called The Magic Feast Of Lugnasad. But I do want to compliment producer Marcel Graell at the Nowhere studio in Barcelona who gave The Path Of Druids such an amazing sound. he managed to capture every note, every detail in the music, amplifying that beautiful contrast between acoustic and electronic instruments and making the most of the talents of all members of Ritual Duir. 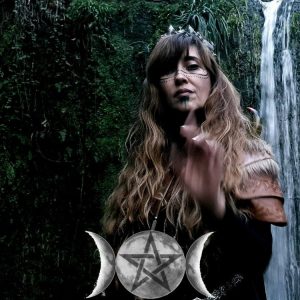 The Path Of Druids is one of the best pagan folk albums I have heard to date, better yet, I personally think it is one of the best albums to grace my CD player ever. The last time I was so taken by a record was the first time I heard Dies, Nox Et Omnia, Cesair’s debut masterpiece. And that is where I want to place The Path Of Druids too. Although I have to add a small side note to that. The power of The Path Of Druids comes from the deep tribal drums, the clever layers of low synthesizer chords contrasting with the clear acoustic melodies and the low electric guitar chords amplifying the powerful vocals. Most of the time I’ve listened to this album through my headphones and then you become part of the music, You hear it, you feel it, it incases you. Listen to this album on a sound system that lacks that bass sound, well, you’ll probably be wondering why I am so enthusiastic about The Path Of Druids. This record is just like the music of Heilung. You need a full-body experience to really make it work. Play this album as the band had in mind while making it, and you will find that is is a true tribal pagan folk masterpiece! A must-have for all who love the dark pagan folk of Cuélebre, the epic folk of Cesair and the powerful sound of symphonic metal legends as Ayreon or Leave’s eyes. To answer Rose and Belenosa’s question when they send me the album: ‘Do I like it? Yes, I LOVE it!!!!!” – Cliff Editor: Sara Weeda pictures: Ritual Duir