Sowulo have a new single out called Brego In Breoste. We had an interview with Faber Auroch telling all about it.

It will not have gone unnoticed by the fans of Sowulo that there is a new album on the horizon. The last two months Faber has been visiting Fieke van den Hurk in her Dearworld studio to record the vocals, and mix all the songs that will be on the upcoming album. To shorten the wait a bit Sowulo have released a first single, Brego In Breoste on the 6th of May and it is, in one word, impressive. Brego In Breoste is modern Viking Folk at its best, grand, theatrical, impressive and spiritual. Fans of Wadruna, Heilung and Kati Rán will definitely embrace this new single too. On Sowulo’s facebook page Faber already hinted that the sound of the new album would be a bit different from the previous two albums, Alvenrad and Sol. When you hear the teasers he put up, it’s clear the sound is more powerful, shifting slightly from acoustic Celtic Pagan Folk towards powerful acoustic Viking Folk. He also hinted that the theme of the new album would be a new one. Alvenrad and Sol were, of course, themed around the Neo-Pagan feasts, the circle of the seasons. This time the theme seems to be more personal, more about an inner journey. We contacted Faber a few weeks ago for an interview, so he could tell us all about Brego In Breoste, and the upcoming new Sowulo album. The first question of course was about the different theme running through the new music we are hearing.

– Through your updates on Facebook the last two months, I noticed that this album is not so much a journey around the sun but rather an inner journey, can you shed more light on this? My music with Sowulo is strongly connected to my real life’s quest for what you could call the “cyclical life” or the cyclical nature of existence. The first three Sowulo albums contained compositions which, for me personally, expressed the external four seasons and the Pagan festivals. Now I wanted to express an inner cyclical pattern which presented itself to me in these past years. The third Sowulo album actually contains a musical manifestation of my experience and interpretation of the “inner four seasons”, presented as “the four archetypes”. The archetypes were described by Carl Gustav Jung and can also be discovered in various myths and pantheons. I converted the archetypes into a symbolic tale that worked for me. I ended up with the following archetypes: the Warrior, the Lover, the King and the Magician, connected with (inner) spring, summer, autumn and winter in a cyclical or spiral-like movement. 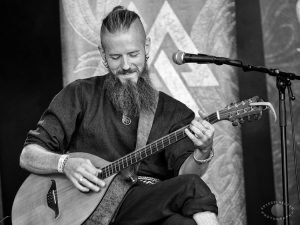 -So the new single Brego In Breoste represents a tale of one of those archetypes, which one and what does it represent to you? The Anglo-Saxon meaning of Brego in Breoste is something like “King in Chest”. This archetypal figure of the King presented itself to me during a time when my outer world looked like it was going to fall apart. It was a period when it felt like I was losing my crown, throne and kingdom (material wealth). During this time, I discovered my “inner king”. I realized that I didn’t really need a material kingdom, and that I was more interested in discovering my inner resources. The music and lyrics of Brego in Breoste invite me (and the listener) to gain a deeper understanding of the fact that you don’t need material riches to feel more whole. Outer riches will only feed what I call your ego-king. The king in your chest lives inside you and doesn’t need any crown, throne or kingdom. This inner king rules wisely, responsibly and with a lot of honour. Within as well as toward the outside world. – There are some changes to be heard in the choice of instruments and sound. The most striking one is the much more prominent use of vocals. Could you tell us how this came to be. When I started composing the music that would ultimately become the upcoming Sowulo album, it was for a different purpose. In fact, I started to compose this music for a film project. This film was going to be about a Dutch tribe in the early Middle Ages. Due to the theme of the film, I started composing single conceptual tracks with my early medieval lyre as the main instrument. I added jouhikko, a traditional two or three stringed bowed lyre, the nyckelharpa, Irish bouzouki, percussions, humming and a few cinematic sounds to it. During this composition process, the production of the film came to a halt but it will hopefully resume in the future. I had created a number of beautiful songs and decided to use them for my music with Sowulo. I thought about a concept for an album which would work with the music I had already made at that point. The theme was eager to be found, hence it was easy to create more tracks with this concept in mind. At a particular moment, I was pointed to a magic Anglo-Saxon rune poem that fit in really nicely with one of the tracks. The text fit in perfectly with the vocal line. This was a point of no-return and suddenly, all the tracks required their own lyrics. – You recorded the last album Sol at your own studio and the mixing was done by Fieke van den Hurk at her, then Orchus studio, now the Dearworld studio. How did the recording proces go this time? Apart from the vocals, I recorded everything myself. I locked myself in my small studio two days a week for over a year to work on this album. When all the songs were recorded and I had pre-produced versions, I made more recordings to include Celtic harp, violin, shakers and woodblocks. Once this was completed, I went to edit and mix everything with Fieke van den Hurk, a super talented sound engineer, in her Dearworld studio. I find it very pleasant to work with Fieke. I also edited and mixed the album Sol with her, and Fieke was also responsible for all the recording and mixing of the Alvenrad album. For this new album, we recorded my voice in Fieke’s studio because I sing my lungs out most of the time. The experience was comparable to my past voice recordings with Myrkvar, there were only three major differences: I “roared” a bit less, I sang in a higher pitch for the first time and all the lyrics were in Anglo-Saxon. The latter was often the biggest hurdle. Luckily, I got help from my good friend Veerle Verhagen. She corrected all the texts for me and let me hear the correct pronunciation. I’m making slow and steady progress in Anglo-Saxon! 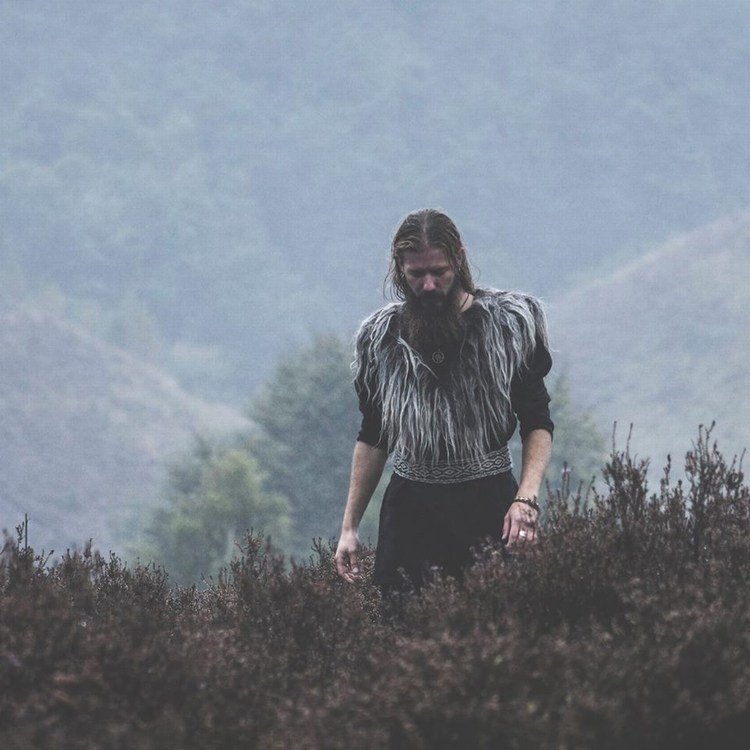 – The sound of Brego in Breoste tends more towards the Norse spiritual epic. Without much of a stretch, a link can be made with Wardruna’s music. What can we expect from the upcoming CD? Brego in Breoste is a good sample of the sound and energy of the album. But given the different characters of the four archetypes, there will be audible differences between the compositions. You can possibly imagine that a song about a Lover character would sound completely different than a Magician’s, just like when comparing music about summer and music about winter. The sound is much more cinematic and epic, this is very much the case throughout the entire album. This is thanks to the origins of this music which was initially meant for a film. Until recently I tried to avoid the sound of Wardruna out of respect for the music. However, since in the past few years so many bands have been inspired by this sound, you can, by now, easily call it a genre. I have honestly been longing for years to produce music with a Wardruna flavour. And since I originally designed the music for a film about a Dutch tribe in the early Middle Ages, I now, for the first time, allowed myself to put this into practice. I am tremendously happy with the further developments. Within this genre, I managed to concoct a unique sound. Now to hope that there is also an audience for it! – Last but not least, when can we expect the new CD? The album will be released this coming summer. A lot still needs to happen with regard to the artwork but with a bit of luck, it will be done in time for Castlefest 2019! Interview: – Cliff Dutch to English translation: – Diane Deroubaix Editors: – Anna Schürmann, Cliff de Booy Pictures: – Spiegelwelten photography – Ruben Terlouw Sowulo on bandcamp:click here Sowulo on Spotify:click here