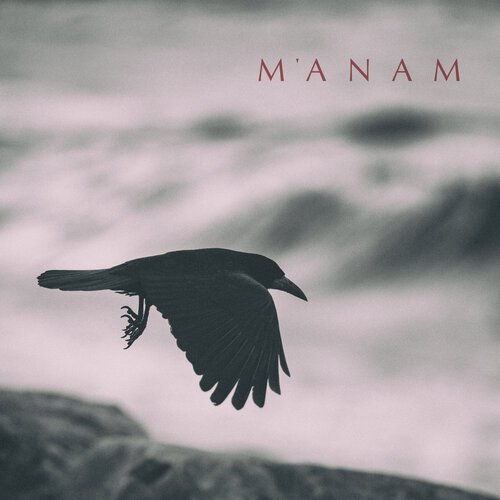 When I think of Ireland I think of the obvious postcard pictures: The rugged coastlines, the misty moors, the ancient ruins, the monks that travelled to all the corners of the medieval world. I think of foggy greens, rainy blues, and cloudy greys. I think of mystery and adventure. And I think of the ambient sounds of Clannad and Enya, the first introduction to Celtic music I heard on the radio as a young lad, many years ago. Well, now I also think of M’ANAM, for the music they make, the music Michael McGlynn (the artistic leader of ANÚNA) wrote for this collaboration with members of the Dutch a capella singing group The Olga Vocal Ensemble and the male voices of ANÚNA, takes my heart to ancient Eire. The times when the Tuatha Dé Danann could still be seen as shadows in the mist. The days when the footsteps of the great hero Cúchulainn still shook the earth. The times when the Morrigan was still flying over the dark battlefields and the dark nights when the druids were still leading their ceremonies within the ancient standing stone circles, waiting for the solstice sun to arise. But also to medieval times, when the Irish monks spread over the known world and shared the knowledge of the antique world that was almost gone. With their deep full voices, M’ANAM takes me with them to those long-gone days, in a more than stunning way.

You would think there is no way I could do a review about M’ANAM without mentioning Micheal McGlynn, the founder, composer and artistic leader of ANÚNA since 1987. Michael is named as the artistic leader of M’ANAM, he co-produced the album, he contributed to almost every song, so it would be easy to think M’ANAM is just another Michael McGlynn project. But it is NOT!!! To use Michael’s own words: “M’ANAM is very different. It’s a band of brothers! It’s a true band – like any other – and they act like a band. My role in M’ANAM is that I am a composer and someone who inspires others to create for themselves. Nothing more.” Talking to Michael McGlynn about M’ANAM it became very clear to me he doesn’t want to be the leader of them. He wants them to shine and wants to help them with ideas and their talents in any way he can. M’ANAM is a true band and Michael just happens to be one of the members. 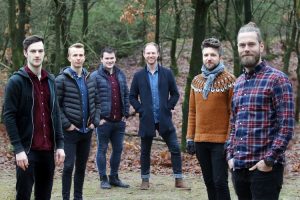 The idea for M’ANAM started when Michael discovered a Dutch a capella group on Youtube that sang one of his pieces. He was really taken by the quality of their version. That a capella group was the Olga Vocal Ensemble and Michael got a chance to meet them when ANÚNA gave a performance in The ir hometown, Utrecht. Philip Barkhudarov, a member of the Olga Vocal Ensemble describes them all coming together as follows: ” In a way, the development of M’ANAM and the connection of ANÚNa and Olga Vocal Ensemble were inevitable. Our shared love of the ancient and the commonality of the rugged Icelandic landscapes and culture put us on a collision course long before we knew anything about it. It was this shared interest that first drew us -the guys from Olga- to perform some of Michael McGlynn’s ANÚNA songs, which eventually led to us meeting up. And things just took off from there.” Not taking anything away from any member of the Olga Vocal Ensemble, who are all very talented singers, Michael was fascinated by the voice of Bjarni Guðmundsson who has, as Michael explained: “a strange and ethereal tenor sound that I really wanted to write for” In March of 2017 Bjarni joined ANÚNA and together Michael and Bjarni selected a song that would showcase that unique voice of the latter. That song became Gunnarshólmi. A song that would, in the end, prove very influential for the direction in which M’ANAM’s sound would develop. The lovely ballad Gunnarshólmi, solo vocals by Bjarni Guðmundsson. Touring with a vocal group like ANÚNA and working so extensively together unavoidabley means that colleagues become friends. And having so many artistic talents together in a group of friends almost organically leads to them make music together. And that is what happened with M’ANAM. A band formed from friendship and the wish to make music together. The final touch was when Philip Barkhudarov from the Olga Vocal Ensemble joined the M’ANAM idea with his deep rich Russian bass sound. Bitter Wind and Deyr Fé were born, and with it the distinctive M’ANAM sound. Philip’s thoughts on it:” It was a huge collaborative effort – the inspiration and stories behind the songs come from all of us, and each singer’s unique sound and vocal/instrumental skills can add to the sound in surprising ways. Some of the songs didn’t take on any kind of recognizable form until we’d spent a good while experimenting in the studio and finding out what the song actually was. When I went into the studio to work on Bitter Wind for the first time, I had no idea what it would end up being. But with some experimental input from the singers, and with a few epic layers of percussion from Noel Eccles, it became something greater than any of us had anticipated.” With ANÚNA being an Irish choir (with their own unique twist to the genre. Hopefully I can come back to that in an ANÚNA review) and The Olga Vocal Ensemble being an a capella singing group with a Nordic influenced record under their belt: their second album Vikings!– it would be obvious to think that M’ANAM would be a mix of the two, and in THIS case, it IS actually true. 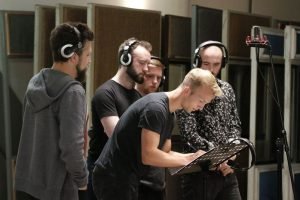