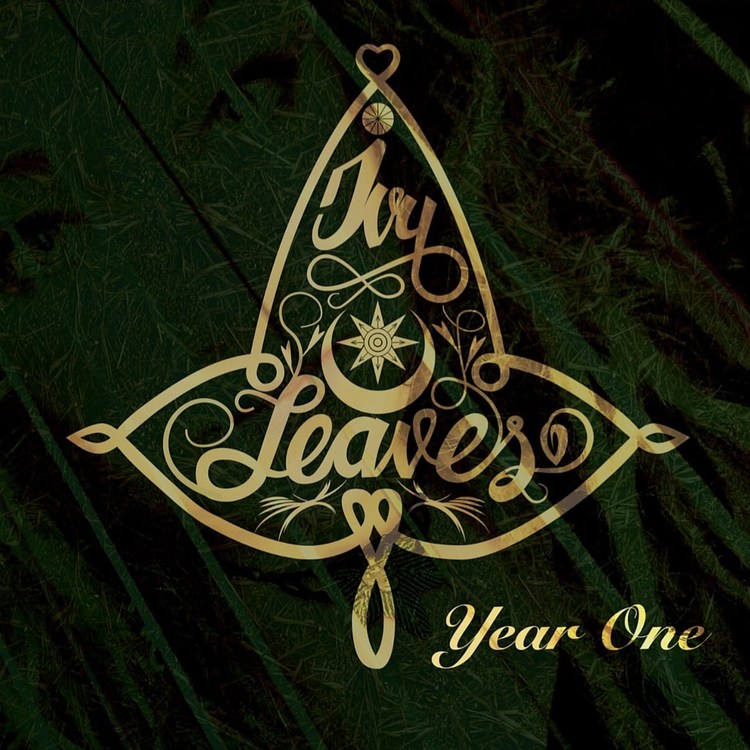 A couple of months ago I saw a post by Jyoti Verhoeff on her Facebook page. In that post, she mentioned a gift from Germany: a CD had arrived with a personal letter attached to it. She continued by saying: -‘Of course, I started listening and was immediately taken into a majestic forest. It was so clear that her creation came from a very magical place. This gifted goddess, nature lover, teacher, and dreamer is called Angelika Abend. She took an insanely brave step to release her own work straight from her soul!’ Needless to say I was instantly intrigued and looked up this artist myself on Spotify. And just as Jyoti I was touched, even though I was listening to the album on a crappy mobile phone speaker while at work. So that evening I contacted Angelika Abend aka Ivy Leaves and within days a small package arrived. In it was Year One, the debut album of Angelika, with it a personal letter attached: -I hope the music will bring you relaxation, thoughtful moments. energetic vibes and natural satisfaction. Every song comes from the heart. Best wishes and green pagan vibes. Angelika Abend/Ivy Leaves.’ Well, dear Angelika, it did! This is exactly what Year One is: A meditative, sincere and ‘happy’ instrumental pagan folk CD. Straight from Angelika’s heart. 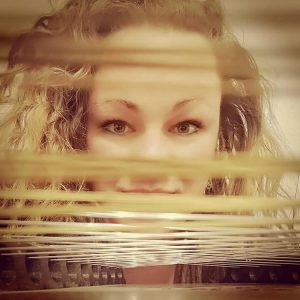 So who is Angelika Abend ? Well, on her Facebook page she describes herself as a nature lover, musician, teacher, and dreamer. Going through her posts I discovered she is indeed a school teacher and a nature-loving pagan as well. Inspired by artists like Jyoti Verhoeff, Waldkauz, Cesair and OMNIA. she started writing music on harp, several types of flutes, hammered dulcimer, piano and harmonium. Angelika Abend: -‘ In January 2020 that creativity was given a huge boost when I started working with Adrian Magler as a producer. He did the recording, mixing and mastering of the final album. Year One was recorded in July 2020 in a cozy wooden recording studio. It was followed by several listening sessions in October.’ And then on the 18th of May 2021 Year One was officially released. As a ‘musical interpretation of the repetitive cycle of life. With all its brightness and all its darkness.’ The album Listening to the first song Stone Cold a couple of words pop up: ‘majestic, calming, happy, positive and serene’. I think those words quite nicely sum up Angelika’s music in general. As Angelika herself told on different occasions that she was influenced by bands like OMNIA and Waldkauz, and the music itself is indeed flute and harp oriented pagan folk you could think this album to be a cross-over of those two bands. But no it is not. Year One has a very own unique sound. It actually leans more towards the orchestral sound of Alvenrad, the first album of Sowulo, but with a refreshing native American flute feel over it. Angelika used a whole range of traditional flutes while recording Year One, including one of my favourite wind instruments: a fujara (Angelika: -‘To be precise a hybrid overtone bass fujara’). She also uses an overtone flute in A, reedpipe, wooden whistles, a raven spirit flute and a Kiowa love flute to create that feel. Don’t expect the fast soloistic way of playing we know from OMNIA’s Steve Sic. No, she uses the flutes as calm, soothing voices. Think of a pagan folk version of John Two-Hawks (A famous Native American flute artist from Lakota/Irish decent, well known as the guest singer and soloist on Creek Mary’s Blood by Nightwish). That calming, meditative effect is enhanced by the use the hammered dulcimer and the harp as accompanying instruments. The third layer of Ivy Leaves music, the ambient part, partly comes from the clever recording Adrian Magler did. He gives Ivy Leaves a sound that comes really close to a band like Sacred Spirit. I especially noticed this, in the percussion. So much so that I initially thought it was programmed, but Angelika assured me that most of them are real percussion instruments, so my compliments to Adrian, as the sound really works. It gives the music of Angelika its heartbeat, its pulse. In the second song, Sleepy Lake, we hear that pulse for the first time. It is still a lovely gentle instrumental ballad, hovering somewhere between ambient pagan folk and new age music. But songs like: Satyr Endeavour, Haily Rain or Waiting For You To Decide all have a really nice build-up from gentle ballads to upbeat ambient dance songs. Satyr Endeavour for instance is quite a catchy song, with a cool dark base melody supporting it. Haily Rain is another really catchy song, in this case, led by the harp. Another favourite of mine is the song Waiting For You To Decide. Starting off as a beautiful fragile ‘ballet’ between harp and flute, it gradually evolves into a full-on dance ballad. One of my highlights on this album. Music, flowing with the season I also need to compliment Angelika on the sequence of songs. The clever bit is that at this point of the album the colour and atmosphere of the music changes.

Combining an acoustic guitar with the harp already gives the intro of Festival Song a different flavour, but it is halfway through the song that a surprising appearance of didgeridoo and percussion and an increase in tempo really pushes the music into a cool pagan folk dance direction. It sounds as if Mich Rozek and Luka Aubri were invited in the studio for a small jam session. The lighter feel from the start of this album returns one more time with the song Always Keep That Feeling, (Angelika’s homage to OMNIA’s Steve and Jenny), but from that moment on the feel of Year One returns to being a bit darker, a bit more autumny so to say. A deliberate choice as Angelika explained to me after she first read the review: -‘The sequence of songs is also designed to be coherent with the months and seasons of the year. Stone Cold represents January, Sleepy Lake is February and so on. My approach was to not only capture the moods of the different natural states but also combine them with emotional situations and a holistic personal story. All this within the course of one year, represented by the 12 songs.’ Apocalooper Flute reminds me a bit of Brisinga’s music, most likely because of the cool didge vibe and the low hoarse sound of the bass overtone flute dancing over it. It is that change in feel, that change in colour of the music that makes Year One such a catchy album from beginning to end. In the last three songs: Falling leaves, Where Do We Go When It’s Dark Outside and Rebirth, you can hear the influence Jyoti Verhoeff has had on Angelika’s music. It is now much more piano orientated and the general feel is way more in the direction of Jyoti’s last album The Sky Of You or the OMNIA songs Wheel Of Time and Sing For Love. Stories of personal development Now that I mention this ‘darker edge’, I found an interesting contradiction between Angelika’s music and the explanations in the booklet accompanying the CD. Normally I tend to hear the things artists write about in the songs themselves. With Angelika, most of the time I don’t. The texts in the booklet are deep, dark, slightly gothic even in feel. Yet I can only describe her music as positive and happy. I think that comes from who Angelika is. although I don’t know her personally. Reading her posts on Facebook and seeing the pictures she uploaded, she seems a happy, positive person. A dreamer maybe, a thinker as well, but in her heart positive and good. And you hear that back in her music. I know the project is called Ivy Leaves, but it is so clearly Angelika’s heart and soul that went into all of it, that I find it really hard not to name her as the artist all the time. Angelika: ‘-If you look at the texts as a whole you might find that they represent a story of personal development and becoming. A deep fall is followed by the strive to get back up again, live life, find the right path, fight the struggle and in the end, find inner peace within oneself.’ 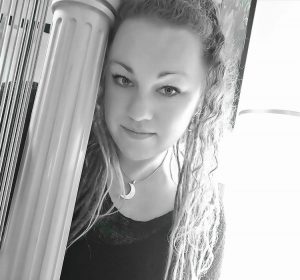 All in all, I’m loving Year One. It is a charming debut, with an artist clearly finding her own voice within the pagan folk genre. Lovely Ambient pagan folk with a good dose of Native American new age spirituality. Congratulations on this lovely debut Angelika. What a way to start the new year! – Cliff Editor: Sara Album cover: Angelika Abend, Adrian Magler Pictures: Angelika Abend