Introducing the music of Brother Sea

The band Runrig had Donnie Munro, The Housemartins had Paul Heaton, Big Country had Stuart Adamson, and Brother Sea have Kris Lannen! What a voice! Irish stand-up comedian Aisling Bea once joked that all Irish people are born with a built-in tear in their voice, that they can instantly switch on when they start singing. Well, Kris must have some Irish genes in him then, because he has that same ability. Just listen to the opening lines of Triskele and you can’t help but be swept away by his beautiful, round, rich voice. As if he has the eternal emptiness of the sea embedded in his vocal cords. Amazing! But Brother Sea are more than that, much more. So it is high time to introduce the music of this stunning Celtic-folk band to you. 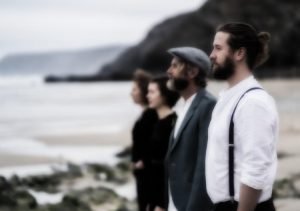 Brother Sea is a Cornish band, combining the talents of the folk duo Harbottle & Jonas (well known for their beautiful singer/songwriter folk, reminiscent of the German folk band Cara, with harmonies that go all the way back to the traditions of Crosby, Stills, & Nash); violinist/vocalist Richard Trethewey ( Didjan, The Rowan Tree ); the up and coming talent of violinist/vocalist and viola player Annie Baylis ( Winter Mountain, Harbottle & Jonas); and of course the aforementioned Kris Lannen. Together they started writing music inspired by the vastness of nature, life in the Cornish countryside, and the eternal beauty of the seas that surround Cornwall on almost all sides (Kris Lannen is a keen surfer as well as a talented musician). Still working on their first full-length album the band started uploading their songs on Bandcamp, the first being the self-titled EP Brother Sea in July 2019. I already mentioned the 4th song from that EP, Triskele, with its stunning vocal intro, the harmonies being a true balsam for your ears. Brother Sea opens the EP in the same stunning way, with just Kris’ voice singing the first lines before the band joins in to play All As One in the most lovely of ways. Everything just fits perfectly: the gentle guitar chords, the beautiful violin melodies weaving in and out, the harmonies, Freya Jonas adding her voice to the rich vocals of Kris. It all results in a truly beautiful, musical treat. Everything is in perfect balance. All parts of the music are there to serve the song, to serve the lyrics. Less is more sometimes, and in this case, less is way more! The song Triskele performed in a home session by Brother Sea That very high standard is kept up throughout EVERY song Bother Sea has released so far. The band introduced their first mini-album with these words: ‘A self-titled EP and introduction to the ocean drenched Celtic-folk sounds of Brother Sea.‘ Well, the second song Curious Shore has that description written all over it. This is the emptiness of the shore caught in music, the vastness of the beautiful ocean captured in words, the dance of the seagulls written in notes, and I’m loving it. The band themselves on this song: ‘A song written about wild swimming. It was inspired by a group of young mums called the Salty Sisters from Porthleven who swim together every morning.’ And that is the true magic of Brother Sea: the combination of beautiful music with the power of poetic lyrics. Songs like the beautiful earworm Triskele from the first mini-album, or the singles Circadian (released in April 2020) and September (released in October of 2020) – they are all singer/songwriting gems. Thoughts and observations molded into poetic impressions of everyday life and deep love, crusted by the salt of the Cornish coasts. This is folk music lifted to theater standards. This is folk I want to inhale, sitting in a velvet theater seat, drowning in the beauty of it all. There are two artists that keep popping up while listening to Brother Sea: Runrig and Milow. Brother Sea’s songs sit just at the crossroads of those two artists. Melodious gentle ballads with a delicious folk sauce poured all over it, arranged and produced in such a lovely way. Listen to that cool ‘ Bob Geldof – This Is The World Calling‘ choir suddenly piping up on Circadian, or the jig suddenly popping up halfway through the song. This is like candy for the ears. The latest single September Oll’ Vel Onen and Trodhydhyek are the songs All As One and Circadian but then sang in Kernewek, the Celtic language of Cornwall. The last song you’ll find on Bandcamp is Brother Sea’s latest single September and well, what can I say? Only that I hope a full-length album is going to come out really soon. For me, Brother Sea is one of the best bands I have heard this year. I truly hope this band will follow the path of success already walked by Amy Macdonald and Rachel Croft as their music deserves to be heard by a broad audience, starting with us, lucky listeners here at CeltCast. Hop over to the band’s Bandcamp page and dwell with me on the waves of this melancholic ocean-bound Celtic-folk band. And to those of you who are planning to go to Keltfest 2021, Brother Sea has been confirmed as one of the bands playing there, so you’re gonna be in for a treat! Guess where you will find me?! Cliff Editor: Iris Picture: Brother Sea