The last month of the year has started! A year in which we worked hard on filling our new radio server. If all goes well, we’ll go live in January! Exciting! 📻

But first … the Christmas season! To get in the mood, we also have a number of Christmas albums this week. Just light the candles, listen to CeltCast Radio and enjoy this atmospheric period. 🌲

I will tell you something about the processed albums below. 📀

Harmony Glen – Jingle Your Bells (2018) (NL)
Last year the song “Christmas Is Here!” was our Monthly Marker in December! But, we didn’t have the album. A couple of weeks ago Harmony Glen gave us this special album at Fantasy Fest Rijswijk for our collection. 🎅

The Shannons – Married Man (2014) – (NL)
We bought this album years ago at Rapalje – NL Groningen, Zomerfolk Festival. It’s a diverse album with different styles. And… the last song of the album is a Christmas song! ⭐️

Back of the Moon – Luminosity (2007) (UK)
(Hamish Napier, Findlay Napier, Gillian Frame, Ali Hutton) This album made me speechless. It’s a perfect folk album. Our Cliff de Booy ( Cliff de Booy Concert Photography ) gave me this beauty a couple of weeks ago at Castlefest Winter Edition 2019. Cliff is very attached to this album and, after listening, I really understand why. For that reason, we are looking for another copy of this album. After which, we can return this one to Cliff’s collection. But we all will fully enjoy the songs on this album, I’m sure of that! Thank you, Cliff 😘

Trolska Polska – Moss EP (2013) (DK)
Years ago, Alex Sealgaire got this very special album of Martin Seeberg at Castlefest. We are very careful with this edition with a real tree leaf on it. A year later the full album “Moss” was released. Our friends from Denmark have a special place in our heart and they bring us the powerful and energetic folk music. 🎻

Woodland – Secrets Told (2013) (US)
A couple of years ago we met the band Woodland from, like they say: “the misty forests of Oregon” at Castlefest . This album has a beautiful appearance with an extensive booklet! 📜

The Trouble Notes – Soundtracks from the Street EP (2017) (DE)
A couple of weeks ago I already told you about these energetic musicians! They are playing a lot “on the street”, hence the name of this album! We’re going to play the song Boddah (acoustic) and Barney Rubble for you! 🛣

Vael – Mure (2017) (ES)
This album fell on our doormat last year and we instantly fell in love! In June 2018 the song ‘Mure’ was Monthly Marker on our radio station. And this year we received their new album: Kairos. Keep an eye on them, they’re going to be big! 🌞

Gny – Aerlig Pael (2008) (DK)
This is an older album of Nanna Barslev of Asynje. We bought it this summer at Castlefest after the fantastic gig of VIRELAI . I really love the song ‘Rolandskvadet’. The booklet is special; you can expand it into a poster. 🖼

Sarah MacNeil Harpist & Jessica Burton – Mira (2013) (UK)
Alex Sealgaire bought this album in a secondhand store! Magical harp sounds…. I love the song ‘Blue Gaze’! I couldn’t find this duo on the internet, but I saw that Sarah is playing at weddings (Sarah MacNeil Harpist Weddings )! So… if you want to celebrate love…

That’s it for now, see you next week!
Musical greetings, Ilona CeltCast 💕 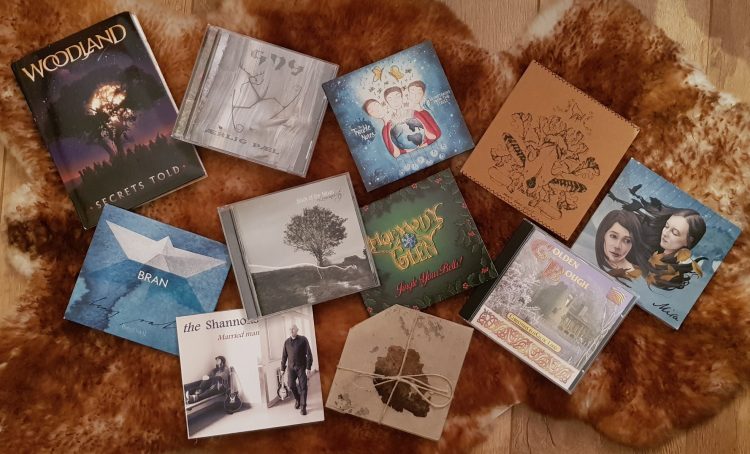