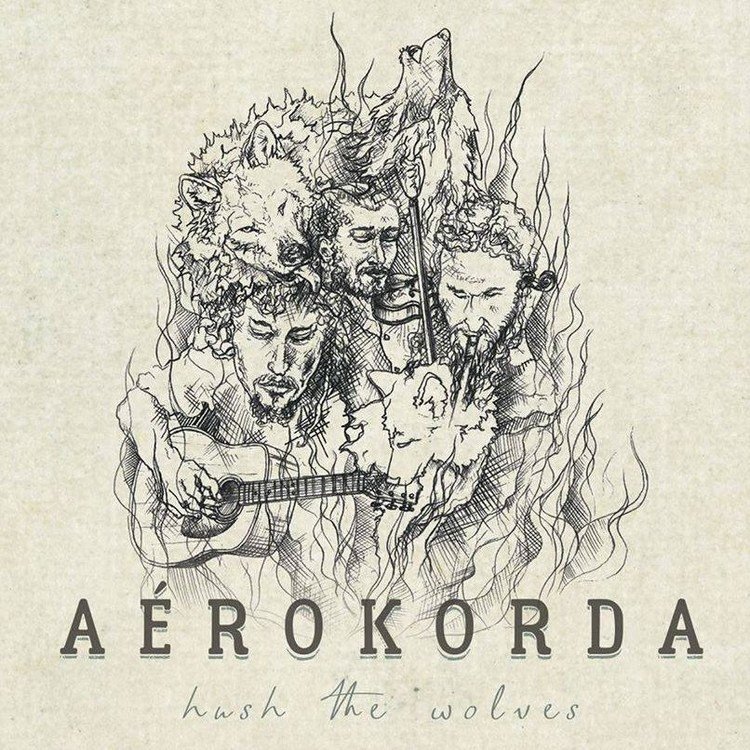 Joie de vivre! That was the first thing that came to mind as I was listening to Hush The Wolves, the debut album of the Belgian instrumental folk trio Aérokorda. The second thing that came to mind? How incredibly fitting this music is to this time of the year. Now that the spring equinox is past us, the first flowers are showing their colours, and my winter clothes are pushed away deep in the back of the closet for yet another year, I was longing for some cheerful, positive music.
And Aérokorda’s music fits right in. It’s the musical explosion of spring colours, the celebrational music of Ostara and -here it comes again- the soundtrack of joie de vivre! This is music filled with energy, it is music that keeps on giving. I can easily see Aérokorda playing the village stage on Castlefest and the whole balfolk community in front of it, swirling and curling on a warm summer afternoon. The field filled with bright coloured dresses, all of them spinning and turning, as the dancers stir up clouds of dust, celebrating life in a kaleidoscope of light. 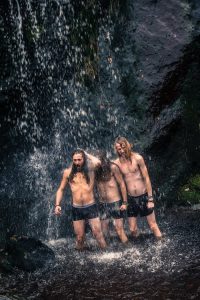 OK let’s introduce the band shortly, Aérokorda is the project of Davy Cautaerts (middle in the picture), Adriaan van Wonterghem (right side) both Belgian, and halve Belgian halve Bulgarian Violinist Pavel Souvandjiev (left). Adriaan is a classic trained guitarist who created his own almost romantic style of guitar playing that he not only shows in Aérokorda, but also since 2001 in the Belgian folk band Boreas.
Violinist Pavel is also classically trained, and listeners could already know him from the Belgian duo Les Bottines Artistique. A duo he formed with chromatic accordion player Guus Herremans. The duo released their first album Summertime in june 2017.
Davy Cautaerts is Aéorokorda’s Irish Whistle and octave mandolin player. He specialised in Celtic music for several years now, he also plays in the folkcore band Ithilien. Ithilien describe themselves as a mix between traditional Belgian folk music and modern metal music like deathmetal and metalcore. A cool band judging by the video’s on their site, that the fans of the harder tpes of metal will most likely appriciate.
As a trio Adrian, Pavel and Davy also play in the bands Sanseveria and the new band Makaram, a septet that brings together world music with a folk rock feel. But this review we focus on their balfolkband Aerokorda. As Aerokorda they play: ‘Folk music with influences from the Irish and the Balkan cultures completed with our own touch and ideas.’as they say so nicely on their own facebook page. And Hush The Wolves is their first album, which came out in june 2017. 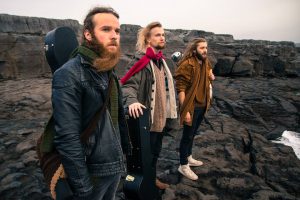 Listening to Hush The Wolves you can safely say you get what it says on the package. The first song FYC starts with a strong Spanish classical guitar chord, followed by a nice flute intro by Davy Cautaerts (left). Then the song itself kicks in. It is, as all the songs on Hush The Wolves a own composition , mixing a lovely traditional sounding Celtic folk melody with Eastern European violin influences. During FYC the violinist Pavel Souvandjiev (right) and Davy divide the lead melodies amongst each other, with guitarist Adriaan van Wonterghem (middle) keeping up the tempo with his passionate Spanish guitar chords. An impressive start to Hush The Wolves, that made me instantly eager to hear more of this album. Hoping I would find more gems on it.
Well, I can assure you, it does not disappoint. The next song I pick up on is the third track , Ontdooi -Dutch for defrost-. On this song Aérokorda take back the pace for the first time. Guitarist Adriaan van Wotherghem starts with a lovely, almost breakable melody line that is the backbone of this song. Over this, Pavel, who wrote Ontdooi, lays down the loveliest of violin melodies. It’s not so much a solo, no, he uses his violin as a voice to tell a beautiful story. A story I pictured as a lovestory. But actually, as the band told me, inspired by how nature thaws after a cold winternight. a lovely theme for this song, a beautiful marriage between violin, guitar and octave mandolin.

Talking about imagination, the next song The Cliffs Of Moher is what inspired me to write the intro of this review. The song is a lovely -and I really mean lovely- piece of cheerful Irish dance music. So full of joy, of energy, I keep putting it on repeat. Adriaan on guitar starts it up, and as is common in Irish traditionals, both the flute and violin join in together to play a tune so catchy and fun, you just must dance to it.
Aérokorda cleverly build the song up, using small breaks before continuing again with a new variation on the tune changing height, melody or lead instrument ever so slightly, adding more and more energy to the tune, something I know the dancers will pick up on when played live. Heck they had me dancing, whistling and waving my hand with every curl and swirl of the melody. (which looks rather ridiculous on a bike, judging by the looks I got from the other people around me in the morning traffic.Not that I care, I’m enjoying myself too much with this album to be bothered.)

After the frantic cheerfulness of The Cliffs Of Moher, the next song Mist is a nice change of pace.
It’s a nice upbeat cultural mix-up song. As if a Celtic flute player met a gypsy violinist during a balfolk dance night and they started to play together. Improvising and reacting to each other as the go along, blending their music together. With a bit of imagination you could say it sounds like Vivaldi playing some variations on Celtic music. And… it works.

By now I think it’s clear I am loving this album. It’s well played, well composed and so catchy. This is a CD made to spread fun and joy, made to dance upon and enjoy life. Aérokorda Jig, the sixth song on Hush The Wolves is, again, positive Celtic folk meets Balkan dance tune. Flutist Davy Cautaerts starts it with a nice upbeat melody. Pavel picks up on it again and the jig becomes yet another beautiful ‘duel’ between flute and violin. Balfolk people will love this music. But not only them, There is enough quality and variation in each song to fully enjoy this from the luxury of a couch as well. If you can keep yourself from getting up and swirling through your living room that is. 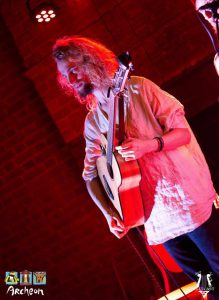 With Ashokan Farewell we get our breath back, as the soft touch of the guitar strings is leading you into a gentle ballad, a duet between guitar and flute, later joined by Pavel on his violin. A lovely calm moment to get your heartbeat down again. Also the first moment on the album where guitarist Adriaan van Wonterghem – most of the time weaving his rhythmic melodies into the music in a supportive role- steps into the floodlights to play some delicate guitar solos. Something he does again on slaapzacht (sleep well), a gentle solo piece for guitar, but so song orientated, that I only noticed it was a solo piece the 5th time I listened it. That is actually a feature of the whole album. There are a lot of solo-esque moments in there, but it never becomes a show of skills. It is always in service of the melody, only done to enhance the beauty of the song. 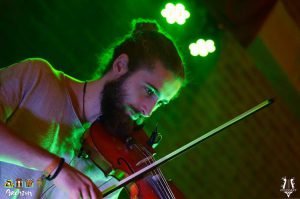 The best example of that is Backstage Andro. It starts with a catchy but oh so calming guitar riff. The violin solo that Pavel Souvandjiev puts over that guitar is pure magic. It starts small and gentle but boy does he open up halfway in a powerful full on solo melody. Trust me, with his violin Pavel can say more in one song than I can say in a week. But it remains a song. Without doubt the best one on this album. Just put your stereo a wee bit louder, -not to much it will become loud enough as it is-, lean back and let the music embrace you. Stunning!
This is also the right time for me to compliment Adriaan on the way he recorded and mixed the CD. He did it in a really clean way with only subtle stereo effects, really getting the best out of all this lovely music.

Now I could go on and on about Hush The Wolves, but I won’t. It’s time for the customary conclusion of this review. On Hush The Wolves the three members of Aérokorda give you the lush, cheerful music of Eire, the traditional guitar chords of Spain and the pure beauty of Eastern European musical heritage.They can be gentle as a raindrop in summer, or grand like the ocean waves. Everybody who loves traditional instrumental folk, has a heart for Eastern European music and ballfolk or appreciates a bit of classical chamber music should have this album in their collection. This is a must have CD. Period!